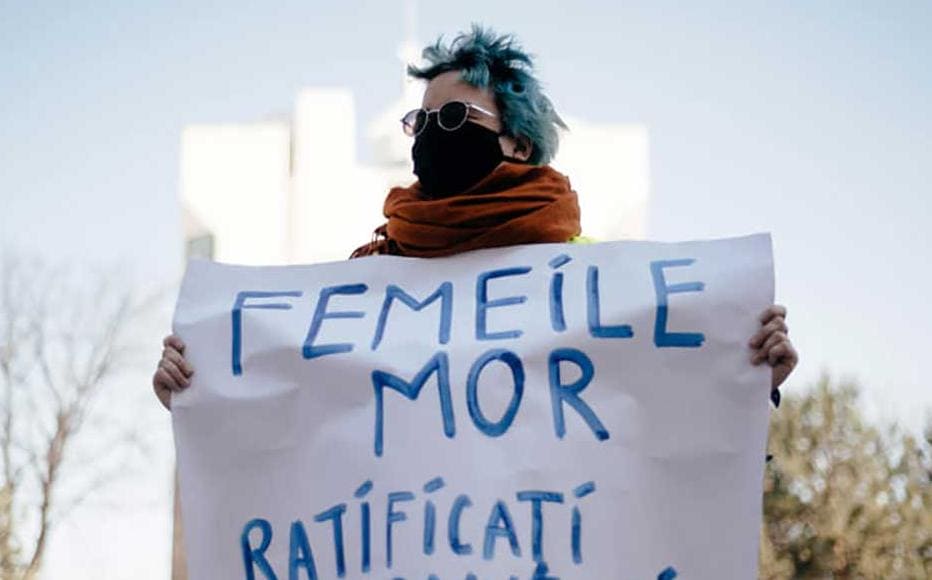 A woman holds the sign "Women are Dying, Ratify the Convention" during a demonstration in front of Moldova's Parliament in the capital Chisinau, ahead of the vote to endorse the Istanbul Convention. © Tatiana Kebak
The link has been copied

After five years of bitter political debate, Moldova’s ratification of the Council of Europe’s convention on combating violence against women has highlighted the division between human rights advocates and conservative groups in the country.

Experts now warn that the test ahead lies in the resources needed to implement the measures that aim to end violence against women, as well as the disinformation around what the treaty, better known as the Istanbul Convention, actually involves.

On October 14, Moldova’s 101-seat parliament split over the ratification, with 54 lawmakers from the ruling Action and Solidarity Party (PAS), voting in favour and the opposition SHOR party against it. The political bloc of Communists and Socialists, which fiercely opposes it, protested by leaving the parliamentary session.

Moldova had signed the document in early 2017 only to see conservative parties, including the Socialist Party of former pro-Russian president Igor Dodon, obstruct its ratification for supposedly eroding so-called traditional family values. The influential Moldovan Orthodox Church, which is canonically subordinated to Moscow, also lobbied against it, with the Diocese of Balti and Falesti calling to excommunicate the lawmakers who endorsed it.

The polarisation in Moldova around the treaty mirrors that in other eastern European countries like Hungary, Bulgaria and the Czech Republic where conservative governments have labelled the convention a threat to family values and their national systems. Women’s rights advocates warn of a worrying increase in the disinformation about what the treaty is and is intended to do.

Ahead of Moldova’s ratification, critics claimed that the convention destroyed Christian values and traditions, legalised same-sex marriage and promoted abortion and LGBT education. They also pointed to how the treaty defines gender as a “socially constructed” category.

“Article three is quietly disguised, it says that gender is not something given biologically at birth, but is a social construct and a person’s choice,” Socialist lawmaker Bogdan Tirdea said, referring to the third definition contained in the Convention’s article 3. “With such a definition of gender, the door is opening for us to legalise at least 56 genders first in public spaces and then in schools.”

He added that Moldova already had “thousands of laws” in place to protect women from violence.

However, rights groups see the convention as a critical step forward to tackle the country’s deeply rooted problem of violence against women.

“In 95 per cent of cases, the victims of violence in Moldova are women. Therefore, the Istanbul Convention is aimed exactly at combating this phenomenon,” said PAS lawmaker Doina Herman, who has advocated for the ratification for years, echoing Council of Europe’s efforts to highlight the convention’s clear focus.

The Istanbul Convention, which came into force on August 1, 2014, sets legally binding standards to combat and prevent violence against women, protect victims and

“The application of the provisions will oblige members of parliament to harmonise national legislation so that victims can receive better and faster assistance,” said Nigina Azizov, programme coordinator at UN Women Moldova. “It [also means] improving the training of human rights defenders, including employees who provide assistance to victims, and creating specialised services to help victims of sexual violence. There are no such instruments in Moldova now.”

According to a study by the Women’s Law Centre NGO, 12,970 cases of domestic violence were officially logged in 2020, an increase of over 1,100 cases from 2019 and almost 2,000 more than in 2018. In 2016, a report co-authored by UN Women found that seven out of ten women from rural areas, and six out of ten in cities, had been subjected to at least one form of violence by their partner in their lifetime.

“The process is too bureaucratic and difficult, the victims… often decide to return to their abusers because they do not have a place to live and do not know what happens next. They tolerate and accept the violence,” she said, referring to one case of a mother of two small children who, after months of being moved from one temporary shelter to another amid the pandemic, ended up going back to live with her abuser.

In 2019, seven women died as a result of domestic violence; in the first ten months of 2020 ten were killed by their abusers.

The Women’s Law Centre’s report noted that while cases were on the rise, the number of criminal cases launched against perpetrators was declining. In 2020, prosecutors investigated 866 criminal cases, more than 100 fewer than in 2019. Victims are also reluctant to report, fearing social stigma and lack of support from law enforcement officers.

The implementation of the Convention poses a series of challenges to the government as the ratification shifts responsibility onto the state to allocate resources at national and local level.

Azizoz noted that going forward, the government will need to put in place a comprehensive implementation plan and as well as reforming legislation.

“At the moment there are quite a few gaps that represent obstacles to ensuring effective justice for women and girls who are victims of violence,” she explained, adding that consultations with specialised NGOs and survivors were critical to spot and fix loopholes.

“The parliament and the government will have to criminalise cases of gender-based violence and adjust the definitions, as well as the corresponding criminal code”.

For Evgeny Goloshchapov, a human rights expert and member of the Chisinau-based Equality Council, the ratification signals the government’s commitment to address the problem.

"If the authorities remain passive in their fight against this problem, they will be discussed at an international level, as they are not fulfilling their obligations," he told IWPR.