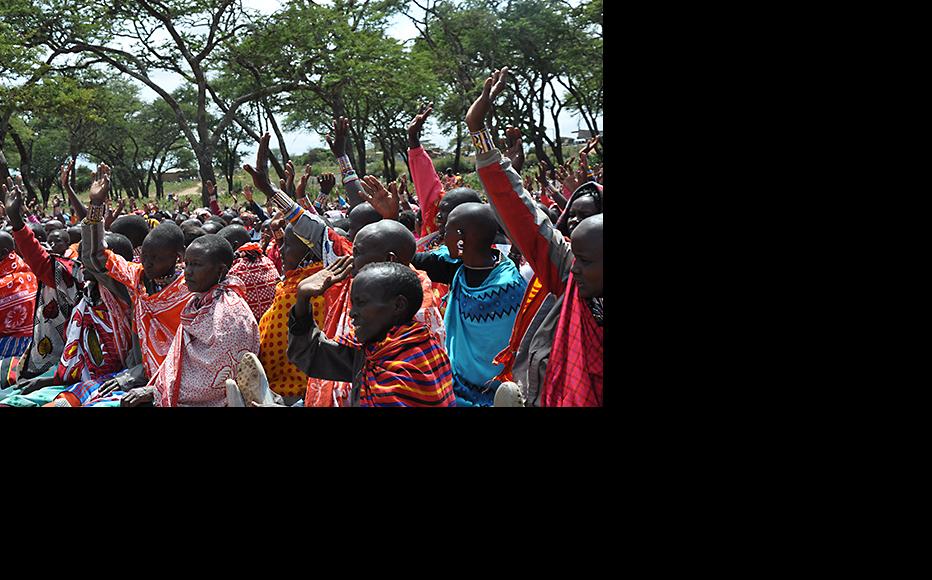 More than 2,000 women and men from the Maasai community gathered in Kajiado, south of Nairobi, on June 12 to protest against a 2011 law specifically banning FGM. It was the second such demonstration held in the town this month.

FGM is also illegal under the 2001 Children’s Act, and a new bill on domestic violence due to be tabled in parliament is to introduce stiffer penalties for those who practice it.

Despite the ban, FGM is still widely practiced by a number of different ethnic groups in Kenya.

According to Adan Duale, majority leader in the lower house of parliament, 98 per cent of girls in what was formerly North Eastern Province undergo FGM.

In the western region of Kisii, he said, the figure was 96 per cent, while among the Kuria and Pokot ethnic groups it stood at more than 90 per cent. Among the Maasai community, the rate is 76 per cent, with the Embu significantly lower at 51 per cent and the Meru 45 per cent.

Communities that still carry out FGM are trying to get the government to change the law and respect it as a legitimate cultural practice.

Laila Nailole, who spoke at the June 12 demonstration as a representative of local Maasai women, said her community would continue to practice FGM.

She said she had supported the introduction of a new constitution, approved by referendum in 2010, without realising it would lead to a ban on FGM.

“We will not stop – we have to continue this,” Nailole told the crowd on June 12. “We thank you [government] for bringing us here today. But you did not explain to us about the constitution properly. That is why we supported it, but now you are biting us with it.”

In Kenya, chiefs are low-level administrators appointed as part of policing mechanisms to help maintain order in their local area.

The June protests followed recent cases where chiefs have been charged with complicity in FGM in their own communities.

Lekishon Moriaso, a chief serving in Kenya’s Narok South District, appeared in court in April after his two daughters underwent FGM. He was charged with aiding the operation and with knowingly allowing it to take place in his home.

Meanwhile, Joshua Kaaka, a chief in Kajiado, is facing charges of failing to report acts of FGM carried out against several girls in his area.

According to prosecutors, the two cases are still in court.

DPP Keriako Tobiko, told IWPR that he believed local chiefs organised the recent protests, although he declined to give further information or name any particular suspect.

“We have unverified information that these so-called demonstrations may have been instigated by some of the personalities we have charged; some are government functionaries,” Tobiko said.

The DPP added that politicians were not doing enough to prevent FGM.

“The leaders must also come out and speak against this harmful practice. Tragically, a number of them would rather keep quiet for fear of losing votes,” he said.

When the Kenyan parliament debated the issue on June 17, members from some areas where FGM remains widespread called for the ban to be lifted.

Jimmy Angwenyi, the member for Kitutu Chache North, told parliament that FGM was an important cultural institution and those practicing it should not face prosecution.

“I wonder why this parliament wants to criminalise people’s culture,” he said. “The Kisii culture is that we must have a small cut on our girls.”

The member of parliament for Nyamira, Alice Chae, an ethnic Kisii who has undergone FGM, rounded on Angwenyi.

“I wish he was a woman like me who underwent it [FGM] and is surviving,” she said. “It is wrong, it is pathetic, and it is primitive.”

IWPR spoke to members of the Maasai community in Kajiado who refuse to give up FGM.

Angel is only one year old but her mother has already decided that she will undergo the procedure.

“When she is between ten and 15 years she has to get circumcised,” she told IWPR.

Angel’s mother said her other four daughters faced the cut after they reached the age of ten.

She does not understand why the practice is illegal given the cultural belief that it averts a curse on the wider family.

“If a girl is not circumcised, it is a curse,” she said. “Her parents, her sisters and her brothers will die early. So if a girl refuses to be cut, she is cursing her family and she is an enemy.

“These things are real, we have seen them happen. There is a man in this village who died after his uncircumcised daughter became pregnant.”

Last month, a girl died in Kajido after she underwent FGM and bled to death.

Asked about this case, the woman said the girl died because she was already cursed.

“The curse caused the death of the girl. One of her parents wanted her to be circumcised and the other parent was opposed to it. That was already a curse. She died because of the disagreement. No one ever died because of FGM,” she said.

Another problem is that women who have not undergone FGM cannot be assisted during childbirth because the Maasai believe it is a curse to touch the blood of a female who has not been cut.

Ben Seiya took part in the June 12 demonstration and also attended mediation talks with government representatives who travelled to Kajiado to listen to the protesters’ concerns.

He believes the practice will end one day, but he is not yet prepared to abandon his belief in it.

“My wife is circumcised, and if I marry a second wife she has to be circumcised,” he told IWPR. “If she is not circumcised when she is giving birth, no woman will help her as they cannot touch her blood. Also, you know that I will be belittled if I have a woman who is uncircumcised for a wife.”

Despite resistance to ending FGM, the DPP has pledged to pursue the issue.

“My duty as prosecutor is to enforce the law,” he told IWPR.“I have no discretion; I have no powers to abrogate legislation that has been enacted by parliament. For as long as that legislation is there, I will enforce it.”

While indicating that he would not waver on the issue, Tobiko said he recognised the dilemma facing Maasai – a group he himself belongs to – for whom FGM is a right of passage.

“Culture is beautiful, it is good; I myself come from that community,” he said. “But the constitution does recognise that not all cultural practices are good. Some violate the integrity and dignity of individuals, and in the case of FGM, it has serious medical and psychological effects.”

Tobiko acknowledged that prosecutions on their own would not deter people from carrying out FGM. He said it was equally important to educate people about both the law and the harmful effects of the practice.

“Just taking files and cases to court will not have the intended effects,” he said. “We have developed a different approach. We go to communities, stakeholders and educate them about it. In some areas, existence of that law is not even known.”