Citizens said yes to the proposed constitutional amendments, but few believe the state’s hold on power will ease. 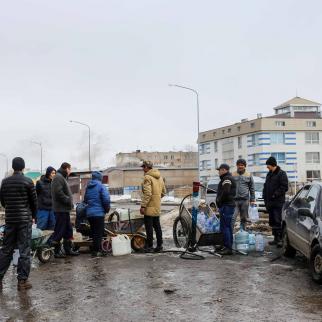 The impoverished village of Prigorodny lies 10 kilometres from the shiny centre of Kazakstan's capital Nur-Sultan. The country's deep inequality has driven the most serious unrest the oil-rich Central Asian nation faced in decades. © CABAR

Vast natural resources have made a select few rich while millions of Kazaks struggle to make ends meet.

Citizens said yes to the proposed constitutional amendments, but few believe the state’s hold on power will ease.

Karlygash Muratova, 90, casts her ballot in Kazakhstan's eastern city of Karaganda. On June 5, Kazakhs overwhelmingly voted in favour of constitutional amendments that de-centralise the decision-making in the oil-and-gas rich Central Asian nation. © IWPR
The link has been copied

Kazaks overwhelmingly voted for constitutional changes this week in a referendum that forms a key part of what president Kassym-Jomart Tokayev has called his “New Kazakstan” agenda.

Tokayev has promoted the changes as the foundation for a new social contract following discontent that in January drove thousands to the street calling for reforms. The unrest left 227 people dead and hundreds injured. It also pushed Tokayev to position himself as a reformer and distance himself from his predecessor Nursultan Nazarbayev who had retained sweeping powers despite stepping down as president in 2019.

The central election commission (CEC) said that 77.18 per cent of the votes cast on June 5 were in favour of the proposed amendments which affect a third of the entire constitution. The turnout was 68.06 per cent.

The changes foresee a redistribution of powers from the president to the parliament, the re-establishment of the constitutional court and an increased role for citizens in political life. Nearly 20 laws should be revised to modify the constitution and implement amendments.

Analysts, however, have little confidence that the reforms will bring substantial change and see the vote largely as a rehearsal for 69-year-old Tokayev’s bid to run for a second time as president once his current term expires in 2024.

“The whole system must be changed.”

One of the key amendments foresees the removal of Nazarbayev’s status of Elbasy, or leader of nation, but the 81-year-old former president retains his immunity and state financial support as do all his family members.

Dosym Satpaev, who leads the Almaty-based consultancy firm Risk Assessment Group, noted that key levers will remain in the president’s hands, including appointing ministers, agency heads, the CEC chief and the chair of the constitutional court.

“The whole system must be changed,” Yerzhan Saginov, an activist with the Kahar (anger) youth group told IWPR. “All officials who made mistakes should be removed from office. No miracle will happen if we just change words [in the constitution]. Why are Nazarbayev’s administration and library still financed if he is now deprived of his status of Elbasy?”

“The reform will create an independent constitutional court and a human rights commissioner office, [which]…will become a truly independent and strong agency to ensure feedback between citizens and the state regarding violations of rights and discrimination,” Ashimbaev, a member of the Almaty-based Public Council at the Archive of the President of the Republic of Kazakstan, told IWPR.

The amendments also include the abrogation of the death penalty, which Tokayev signed into law at the end of 2021, following calls from rights groups.

The January unrest left the country in shock, and many citizens headed to the ballot hoping for a change.

Abzal Salykov, a resident of Kostanai, a city of 110,000 in northern Kazakhstan, said that he voted due to worries about his country’s future.

“We all want to build a new Kazakstan, everyone is tired of the old one,” he told IWPR, adding he would have rather voted for each change. “You either agree with all amendments or not. In any case, it is some progress. I like that we can now remove any deputy from office who fell short of citizens’ hopes.”

In the eastern city of Karaganda, Karlygash Muratova, a 90-year-old former USSR civil servant, cast her vote despite her frail health.

“I can barely move my feet, but I couldn’t miss the referendum because all these changes are important for the country. In Kazakstan there is so much wealth… In the last 30 years, we were unlucky to have our ex-president. All spheres were corrupt, wages were very low. I think that the amendments to the constitution will help us build a successful state,” she told IWPR.

The blanket changes, however, left some citizens sceptical. Aigul Sanzharova, a teacher in Almaty, the country’s commercial hub, told IWPR she did not vote as she did not see how citizens could agree on all the 56 proposed changes. She herself said that could not understand many details.

The text of the draft law to amend the charter is almost ten pages long and the language was too complex for ordinary citizens, noted lawyer Sardar Kylyshbaev.

“Some members of parliament do not understand it, not to speak of ordinary citizens. They had to write it in plain language and publish it in newspapers,” said the lawyer, based in the south-central city of Kyzylorda. “In many villages there is still no internet and rural residents voted without understanding what they voted for. An acquaintance called me from a polling station and asked what to write on the ballot.”

Gulnura Rakhmetova, a mother-of-five in the country’s southernmost region of Turkistan, said she did not fully understand what the referendum entailed, but voted nevertheless.

“It is the way it should be. I want my children to be happy. I don’t know what was in there, but I chose ‘yes’. It means that Kazakstan will achieve great success. I believe in our president; he is a common person. I guess they will increase benefits now,” she told IWPR.

Authorities involved well-known bloggers, singers and actors in promotional events to call on citizens to head to the ballot.

“I have heard that some polling stations handed out gifts to voters, provided free food. My neighbours went to vote because of that,” Sanzharova said.

On social media, some university students complained that they were forced to head to the polling stations. One student posted that his supervisor told him that he could lose his government scholarship of 21,000 tenge (48 US dollars) if he did not.

“They can easily do it just by giving me low grades,” he wrote. “We have a common chat where everyone posts photos confirming they had voted.”

“Political reform should have begun in early 2020. But everything remained in word only.”

The June 5 vote was the third constitutional referendum since the oil-and-gas rich country gained independence in 1991.

In 2019, the newly appointed Tokayev outlined his vision of the “listening state,” a notion whereby the government “quickly and efficiently responds to all constructive citizens’ requests”.

But little changed and observers saw the January 2022 unrest as a wake-up call for Tokayev.

“Political reform should have begun in early 2020. But everything remained in word only,” opposition politician Mukhtar Taizhan told IWPR. “This referendum is not a gift of the authorities to us; it is the people’s... If [Kazaks] had not taken to the streets in January, we would be sitting back and hoping. What is the need to advertise amendments to the constitution if they are useful?”