Calls for further sanctions as well as heightened protection for pro-democracy campaigners. 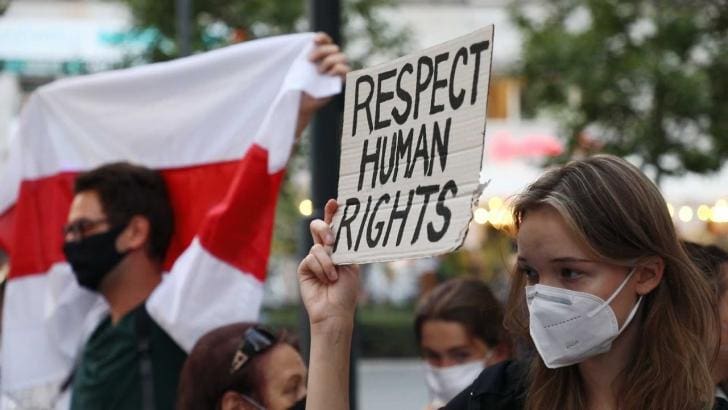 Exiled opposition leaders call for international support in their fight for democracy.

Calls for further sanctions as well as heightened protection for pro-democracy campaigners. Protesters demanding that Roman Protasevich be freed in Warsaw, Poland. © Kuba Kaminski
The link has been copied

Belarusian opposition activists in Poland say that they fear their lives are in danger after the Minsk authorities forced a passenger plane to land so as to detain a dissident journalist.

Roman Protasevich, who was living in Lithuania, was on the Ryanair flight from Athens to Vilnius which was diverted over a supposed bomb threat. The 26-year-old, previously the editor of the NEXTA Telegram channel that has served as a key driver in the anti-regime protests, was arrested on charges of extremist activity as soon as the flight landed.

Poland has become a hub of political activity for many activists forced into exile since protests began over last year’s disputed elections in which President Alexander Lukashenko insisted that he had won more than 80 per cent of the vote. NEXTA (someone in Belarusian), is based in Warsaw, alongside numerous other pro-democracy organisations.

But leading activists are now calling on governments in Poland and elsewhere in Europe to take extra measures to ensure their safety, arguing that Protasevich’s arrest has highlighted their extreme vulnerability. They report that threats against them have risen since his detention.

“We are asking Poland and the EU to provide reliable protection, because we are afraid,” said Stepan Putilo, the founder of the NEXTA channel.

He added, “There is no doubt that Roman is tortured by the Belarusian services and I have no doubt that the plane was grounded precisely because the editor of the NEXTA channel was onboard. Now he might get even 18 years in prison.”

“We do what we can, we engage, but we do not feel fully safe even in Poland,” said Ales Zarębiuk, head of the Belarusian House in Warsaw, explaining that the movement feared that activists’ lives were in real danger.

“They [Belarusian authorities] can plant a bomb here, can poison us,” he continued. “We would like Polish leaders to assure us that they will protect us, all of us, our Belarusian diaspora in Poland."

Protasevich’s parents also fled Belarus for their own safety a few months ago and now live in Poland.

“My son only informed about what was happening in Belarus,” said his father Dzmitry Protasevich told reporters, noting that in the video the authorities released following the arrest “his nose is broken, he is badly beaten, and his face for the recording was made-up, covered with powder”.

A daily demonstration is held every afternoon in front of the EU Commission building in Warsaw, where people carry historical red and white flags, a symbol of their movement, gather to express their solidarity and to demand Europe implement diplomatic and economic sanctions against Minsk. EU countries have already closed their airspace to Belarus and have promised further measures soon.

Four people are also on hunger strike outside the EU building.

One of them, Stasya Glinnik, a member of the Belarusian Youth Hub, said,  “The sanctions we demand should have already been introduced in August last year. Almost a year has passed [since the uprising began] and so far there are no economic sanctions. We want the EU to introduce an embargo on Belarusian state-owned enterprises and stop Western countries dealing with the Belarusian government. That is why we are on strike and we will continue our fight.”

There are also protests in front of the Belarusian embassy in Warsaw.

“Since last year, I have been coming to every protest, to every solidarity action, and I stand shoulder to shoulder with my Belarusian compatriots to show our opposition to what is happening in Belarus,” said one protestor Svetlana, who asked to remain anonymous. “What is happening is beyond comprehension. How can you, in 2021, in Europe, just hijack a plane, hijack a person? How could this even happen?”

Zarębiuk said that the movement would continue its campaign of protests, letter and petition writing, as well as social and political actions in Poland. But he stressed that a strong international reaction was essential to bring change.

“We Belarusians expect a strategic coalition of the West for a democratic Belarus, because only a democratic Belarus can be a partner for them, for Poland or for other Western countries,” he said. “We, Belarusians in Poland, talk to politicians at many levels, but we need a specific strategy, not just reactions to Lukashenko's actions.”