Tens of thousands fled over the border after the disputed 2020 elections. Now, many are volunteering to help the war effort. 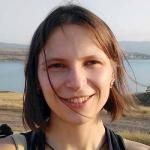 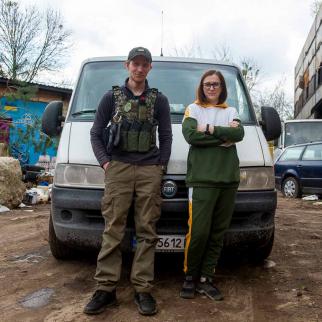 Luibov and Ivan at a loading warehouse in Lviv. © Paul Conroy

Both radically decentralised and profoundly efficient, a vast civilian volunteer network is mobilised across Ukraine.

Tens of thousands fled over the border after the disputed 2020 elections. Now, many are volunteering to help the war effort.

Anisiya Kozlyuk, a Belarusian human rights activist who sought refuge in Ukraine last summer, says that she has never even considered leaving her adopted home since Russia’s full-scale invasion began in February.

“I don’t want to go to Europe, because I belong here,” she said. “I am involved in lots of [volunteer] initiatives and many of my colleagues are here too. I know that I can do a lot from the rear, and I stayed because I want to support Ukraine.”

Tens of thousands of Belarussians sought refuge in Ukraine following the disputed August 2020 elections that saw Alexander Lukashenko win another term as president and crack down on subsequent protests. While a large number then moved on to other European destinations, many stayed in Ukraine and some have even volunteered to fight with its armed forces, including in an all-Belarusian volunteer brigade that serves alongside Ukrainian soldiers.

Kozlyuk said that, given Belarus’ active support of the Russian invasion, she knew of cases where her fellow Belarusians had faced discrimination. That, however, had not been her experience.

“I personally have never encountered any inconvenience because I was Belarusian. I have never been confronted because of the missiles fired from the territory of Belarus,” she said.

Kozlyuk left Belarus last summer after police detained colleagues who were questioned about her. Two criminal cases were then launched against her and she said she could expect to receive a two-to-eight-year prison sentence on politically-motivated charges were she to return.

Now based in Lviv, Kozlyuk has thrown herself into volunteering. Since the start of the war, she has worked with the Free Belarus Centre to help resettle internally displaced people (IDPs) arriving in the relatively safe western Ukraine city.

“Refugees are still arriving. Many arrive on evacuation trains, but mainly wounded, because it is safer here. It is very difficult to get out of the occupied territories, but some still manage to do it, including from Kherson and Crimea,” Kozlyuk said.

She also helped source supplies for the international brigade fighting with the Ukrainian army.

“I am buying a lot of things [for volunteers], from gun oil to needle and threads - someone must buy them too,” she said, adding “It is critical to have high-quality tourniquets in the first-aid kits. They were all sold out in Ukraine and Poland in the first days of the war. I could buy them only in Lithuania and Germany, but in a limited amount, sometimes five and sometimes 20 pieces at a time.”

The latest request had been for tweezers to remove ticks, she continued, along with tobacco for soldiers on the frontline.

Polina Brodik is a coordinator at the Free Belarus Centre, a civic initiative now helping those affected by the war which was originally created to support Belarusian asylum seekers.

“From that moment, the number of people crossing the border ranged between 20,000 and 30,000 monthly,” she said. In December 2020, the Belarusian authorities imposed restrictions on leaving the country.

Brodik said that some stayed temporarily in Ukraine in order to receive visas for further movement in the EU.

“More people went to Poland, Lithuania and Georgia,” she said.

Referring to migration service data, Brodik explained that over 5,000 had people tried to legalize their stay in 2021. In 2021, the authorities issued 3,058 temporary residence permits and 2,154 refusals, while 96 applications were filed for asylum and only eight were approved. It appeared that Ukraine was not ready to receive a large number of political migrants from Belarus, Brodik added.

“Estimating by the number of Belarusians seeking our advice, the actual number is probably twice as much,” she said. “Approximately 10,000 or 12,000 people entered [Ukraine] for political reasons.”

Karen (not his real name), a longtime political activist, joined the team of one of the opposition candidates in the August 2020 presidential elections. The following year, amid mounting political persecution, he decided to leave and headed to Ukraine.

He worked as a financial director of the Belarusian club Torvald in Kyiv until the war intervened.

“I woke up minutes before the first explosion, checked out my Telegram – the war had begun,” he said. “My friends from Kyiv told me that they were leaving, but I weighed everything and decided to stay.”

Now he spends his days welcoming newcomers at Lviv station and loading dispatches of humanitarian aid, volunteering alongside several other Belarusians.

“Of course, I feel embarrassed when we are treated like accomplices,” said Karen, adding that once he was not allowed to enter the church and was also refused a service at the insurance company.

“We must draw analogies: not all Germans were fascists, not all Chechens were Kadyrovites [a paramilitary group accused of human rights abuses].”

Born in Minsk, Karen lived in Armenia until he was four, when his family was again displaced by the Nagorny Karabakh war in 1991.

“I remember a city plunged into darkness, there was no electricity, we had only candles. There was no water and almost nothing to eat. We could hear shooting. My mother could not stand it and took me and my sister to our grandmother in Minsk,” said Karen.

“I am twice a refugee and I am tired of running away, I can’t flee for the third time. Also, I understand that if we lose Ukraine, we will lose our Belarus. We Belarusians think about our country all the time.”