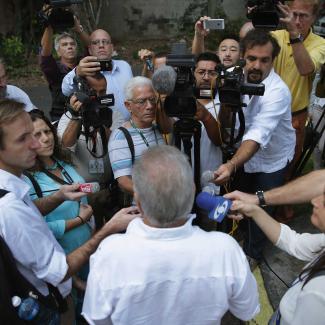 Elizardo Sanchez, head of the banned but tolerated Cuban National Human Rights Commission, talks with journalists after meeting with Assistant Secretary of State for Western Hemisphere Affairs Roberta Jacobson at the Residence of the Chief of Mission of the U.S. Interests Section January 23, 2015 in Havana, Cuba. © Chip Somodevilla/Getty Images 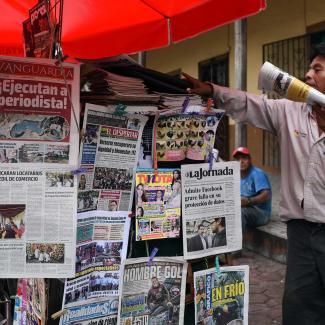 A newspaper with a cover headline referring to Mexican journalist Leobardo Vázquez Atzin who was gunned down on March 21 2018 in a state plagued by drug cartel violence. © Victoria Razo/AFP via Getty Images 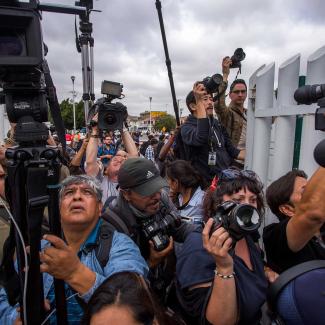 Journalists try to photograph members of a caravan of Central Americans who spent weeks traveling across Mexico as they walk towards the U.S. side of the border to ask authorities for asylum on April 29, 2018 in Tijuana, Baja California Norte, Mexico. © David McNew/Getty Images

Strengthening media in Latin America and the Caribbean to counter evolving threats and conduct fact-based reporting that speaks truth to power.

However, recent years have seen a continuous deterioration of media freedoms in the Latin American and Caribbean (LAC) context according to Reporters Without Borders’ Media Freedom Index. Journalists and other media workers face threats including attacks, repression and disinformation campaigns by increasingly authoritarian governments; violence and murders by private actors; and a dependency on government advertising and a scarcity of resources to conduct work independently.

Even the internet – often considered a haven for free expression and which continues to provide excellent opportunities for reaching audiences – has become a threat to accurate and independent journalism. Aside from online censorship, harassment, surveillance and cyberattacks, outlets in the region now also compete for online space with disinformation, propaganda and clickbait. Leaders use social media as a way to circumvent the filtering role traditionally played by the media, while malign national and foreign actors capitalise on algorithms to manipulate public opinion and elections. Media outlets and journalists are themselves regular victims of disinformation campaigns.

These realities have become more acute during the COVID-19 pandemic, as governments have sought to control information and abused emergency powers, while disinformation and fake news have distorted the public’s understanding and economic crises have reduced media advertising revenue.

In response to these challenges, in late 2020 IWPR created the Consortium to Support Independent Journalism in Latin America (Consorcio para  Apoyar el Periodismo Independiente en la Región, CAPIR) to strengthen the capacity of journalists and media outlets in the region to sustainably counter threats and challenges, allowing them to conduct fact-based reporting that holds power-holders accountable.

IWPR believes that only by pooling resources and combining expertise, can some of the recent reverses in press and media freedoms be confronted.

The consortium is made up of six founding members, all with complementary expertise to support journalists overcome threats and reach their full potential.

To ensure that the project methodologies are adapted to the contexts of the different countries and subregions where we operate, CAPIR also works with local civil society partners in each of our priority countries. They ensure that the project adjusts to different political realities, varying levels of free expression and access to information, different risks faced by journalists as well as disparate patterns of discrimination faced by women, LGBTIQ and ethnic minorities and diverse rural/urban configurations.

Animal Politico is a highly respected Mexican digital news media that has received several prestigious awards for investigative journalism and fact-checking initiatives. Their high impact reporting has led to the unseating of corrupt politicians and the procurement of justice for victims - gaining the outlet wide recognition across the region. Leaders in collaborative reporting initiatives, they also share their methodologies with other journalists across Mexico and Latin America.

Armando.Info is a Venezuelan media outlet, leader in investigative journalism in Latin America. They have successfully led transnational investigative projects about corruption and organised crime, many of which have impacted the Latin American public agenda and have earned the organisation numerous national and international prizes.

DataCrítica is focused on assisting the media in journalistic data investigations, providing data visualisation and analysis, and advanced digital tools to research essential current topics. By crossing data, their work has often supported greater understanding about how issues, ranging from human rights abuses to COVID-19, have specifically affected historically marginalised communities, women, and the environment.

Founded in Colombia in 2003, Fundacion Karisma is today one of the leading Latin American organisations promoting human rights in the digital world. They have spearheaded world-recognised initiatives to counter gender-based violence online, such as their ‘Alerta Machitroll’. Through their Digital Security and Privacy Laboratory (K+LAB), Karisma has worked with civil society and media in training aimed at fostering digital security and privacy-sensitive organisational cultures.

Founded in 1991, IWPR is an international not-for-profit organisation that empowers local voices to drive change in countries in conflict, crisis and transition. Where hate speech and propaganda proliferate, and journalists and civic activists are under attack, IWPR promotes reliable information and public debate that makes a difference.

Vinland Solutions has more than 25 years’ experience intervening in critical situations for psycho-emotional care, as well as in advice for personal and institutional security. In the past 16 years they have worked with Article 19, the Committee to Protect Journalists, Freedom House, Periodistas de a Pie, the American and International Red Cross and IWPR to provide both in person and remote psychological support to at-risk journalists and to train journalists on their physical security. 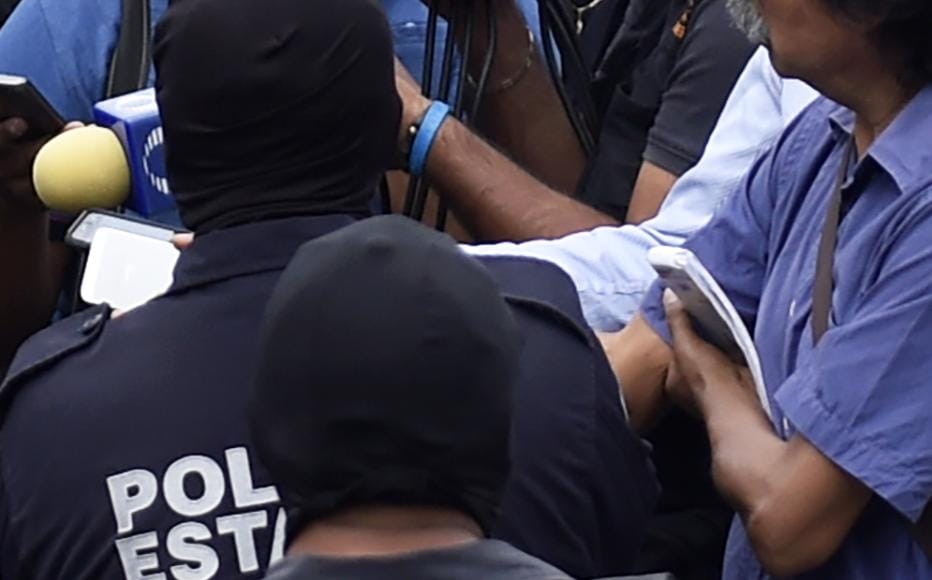 Mexican journalists work during a protest of police officers in Chilpancingo, Guerrero state, Mexico, on May 30, 2017. © PEDRO PARDO/AFP via Getty Images

CAPIR formed and trained two disinformation coalitions in two states in Mexico, #SinaloaVerifica and #ChihuahuaVerifica, which brought together six media outlets to help local audiences make informed choices in the face of the highly contested and disinformation-filled 2021 elections.

In an excellent example of collaborative reporting, journalists from three different media participating in CAPIR’s #SinaloaVerifica Disinformation Network informed voters about the procurement of a candidate’s new luxury car. A rival had implied money laundering and other nefarious dealings with no proof and the team worked together to uncover what really happened. They also explained how campaign donations should work. Informing a Candidate Into Transparency

When #SinaloaVerifica pointed out that a candidate had been misleading when he said he had already made his full patrimonial declaration, he quickly reacted, publishing the document just hours later. The article also explained to voters the transparency expectations for electoral candidates. Disinformation networks can help ensure those in power are held accountable for what they say. 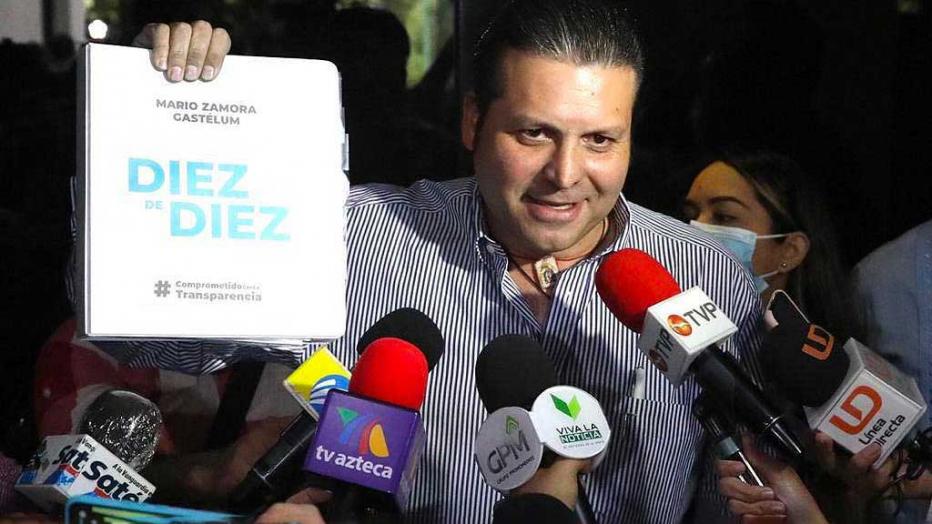 Miriam Ramirez, reporting for Revista Espejo as part of the #SinaloaVerifica media coalition, uncovered anonymous Facebook pages disseminating false or unverified information about candidates. Using Facebook’s new transparency rules, she was unable to uncover nodes and responsible parties of the so-called “dirty war,” who had paid for adverts with false information aimed at manipulating voters. This included at least one staff member of a political party. Many of these fake pages tried to simulate news outlets. 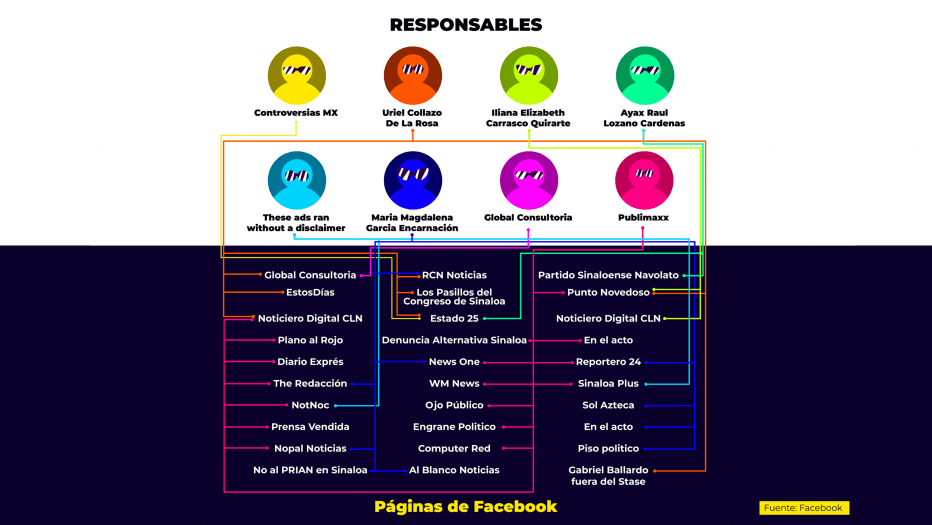 In a year of severe drought, water has become a defining electoral issue in Chihuahua, with candidates of all parties making broad promises about how they will handle the crisis. In particular they made populist statements blaming an international treaty with the US for the scarcity. #ChihuahuaVerifica explained to readers the reality behind the issue, including bad water management, and also looked into how realistic candidate’s promises really were. 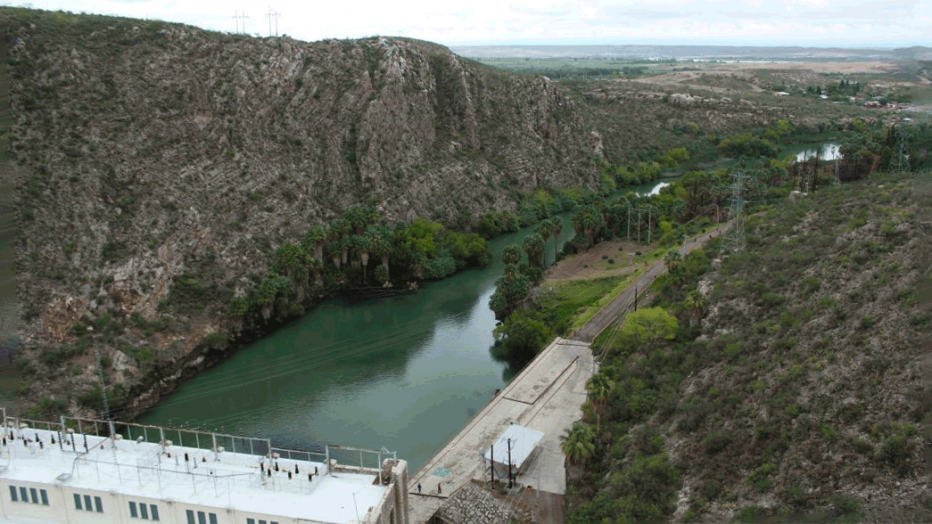 As more and more candidates stepped down, the Indigenous focused news website Raichali of the #ChihuahuaVerifica coalition, took on the task of explaining to voters the complicated electoral rules about what happens to votes already cast for those candidates. 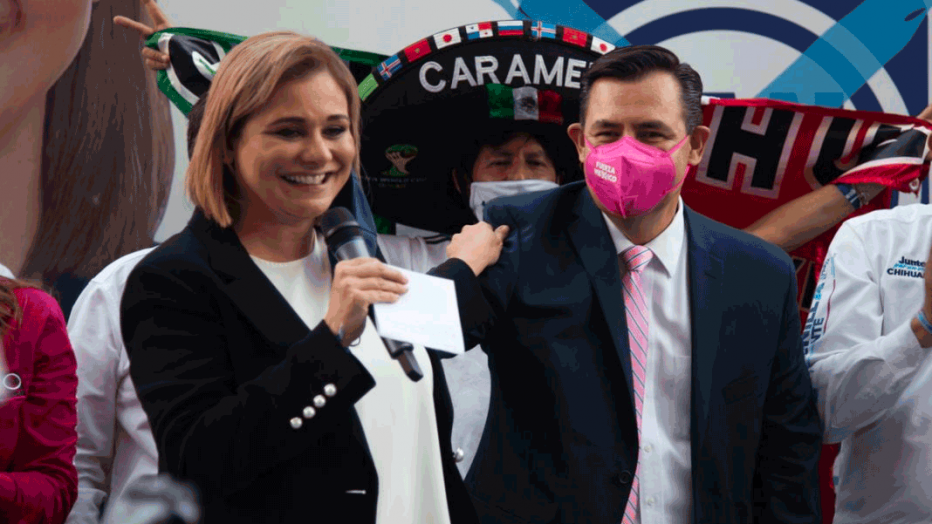 In a region rife with corrupt and autocratic governments and organised crime, independent journalistic investigations have proven vital to uncover serious wrongdoing by authorities and private actors which would have otherwise gone unnoticed and unpunished. However, investigative journalism in Latin America is underfunded and dangerous both for journalists and their sources.

CAPIR is therefore providing training, mentoring support, access to security experts and seed funding to journalists across the region wanting to learn how to conduct investigative reporting. Prioritising journalists from historically underrepresented groups, the project will provide the capacity for them to learn to work collaboratively, use access to information laws and data sets and a variety of digital tools.

Depending on the focus of the project proposed, journalists will be assigned expert mentors from IWPR, Animal Politico or Armando.Info, with Data Critica providing support to all projects that require the use of data sets. Riot Police officers use tear gas to disperse protesters near the premises of Globo radio and TV, during the arrest of Honduran journalist David Romero, who barricaded during four days at the station resisting his capture in Tegucigalpa, on March 28, 2019. © ORLANDO SIERRA/AFP via Getty Images

Security risks to journalists are probably the greatest threat to independent reporting in the region. The fear of threats also causes journalists to self-censor, leaving many sensitive issues or geographical locations with little to no independent coverage. These are known in the region as ‘silenced zones’ or ‘information deserts.’

All CAPIR participants have access to risk assessments and the development of security plans catered to the threats and vulnerabilities that they face in their context, as well as the specific dangers posed by the journalistic work to be investigated.

CAPIR partners Fundacion Karisma and Vinland Solutions have joined forces with Free Press Unlimited and physical security experts, to build a series of self-guided courses on digital, physical and psycho-social security that will be available in Spanish to journalists from across the region. These will be published in the Totem Project Website throughout 2021 at totem-project.org.

The same partners will also be available to provide individualised physical, psychological and digital security support to journalists facing specific risks, and to help media outlets develop institutional plans and protocols to ensure the safety of their staff.

The range of measures covered by CAPIR. Mexican journalist Daniela Rea, is pictured while working at her home in Mexico City, on April 18, 2018. © PEDRO PARDO/AFP via Getty Images

Managed directly by IWPR and bringing in experts from across the region, IMDI offers media outlets with high potential the opportunity to increase their reporting capacity, audience reach and financial sustainability as well as ability to protect their journalists.

Prioritising supporting women-led media, directors, editors and journalists participate in  strategic planning to define their mission and business vision. They also consider the layout and sections of their media and social media pages, the type of content produced and the tone and style used, exploring creative ways to expand to new audiences.

Importantly, media outlets will be given access to finance experts who will provide guidance in the creation of business plans to diversify funding and ensure long term independence.

Sustainability will also be supported by the creation of organisational security protocols, that help institutionalise the digital, physical and psychological security of the media, journalists and other at risk staff.