Afghanistan’s turbulent recent history has left millions dead, many more displaced, a country in ruins and a legacy of bitterness that will take years to overcome. The limited reach of central government, the volatile mix of political, regional and ethnic loyalties, and the heavily militarised social environment make it difficult to move beyond the continuous cycle of conflict.

The new administration of President Mohammad Ashraf Ghani will have to work hard to break this pattern. The High Peace Council and its predecessor, the Peace and Reconciliation Commission, have persuaded hundreds of former insurgents to come over to the government’s side, but there is still a long way to go. Continued suicide bombings and other attacks underline the enormity of the task ahead.

A new IWPR initiative called Afghan Reconciliation: Promoting Peace and Building Trust by Engaging Civil Society is designed to facilitate this process. Building on the format of IWPR’s Youth and Elections project, the idea is to draw Afghans into a nationwide discussion on peace-building and reconciliation.

“Citizen watchdog groups” led by Muslim clerics, civil society leaders and journalists will be set up across Afghanistan to serve as bridges between the community and local government and hold the latter accountable. At the same time, some 180 public debates are taking place in all 34 provinces, reaching an anticipated 18,000 people. A series of inter-provincial debates will allow people in different parts of the country to talk to one another directly and then take part in phone-in radio shows.

A series of training seminars will offer provincial spokespersons of the High Peace Council ideas about how to engage with the public and the media on peace and reconciliation issues.

The key objectives of this work are:

Speakers say that public trust can only be won through a higher degree of professionalism.

Diplomat hints that Moscow may share common interests with the insurgent group.

Experts argue that vital resource could be worth of billions of US dollars to the country. 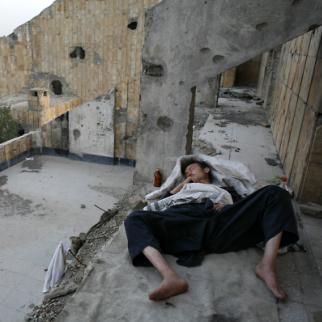 A homeless heroin addict sleeps outside on the ledge of an abandoned building in Kabul. (Photo: Paula Bronstein/Getty Images) Events in three provinces hear about the role teachers can play in creating a better society.