Local reporters contribute to making shows relevant, and “listener groups” help make sure they are.

Local reporters contribute to making shows relevant, and “listener groups” help make sure they are. 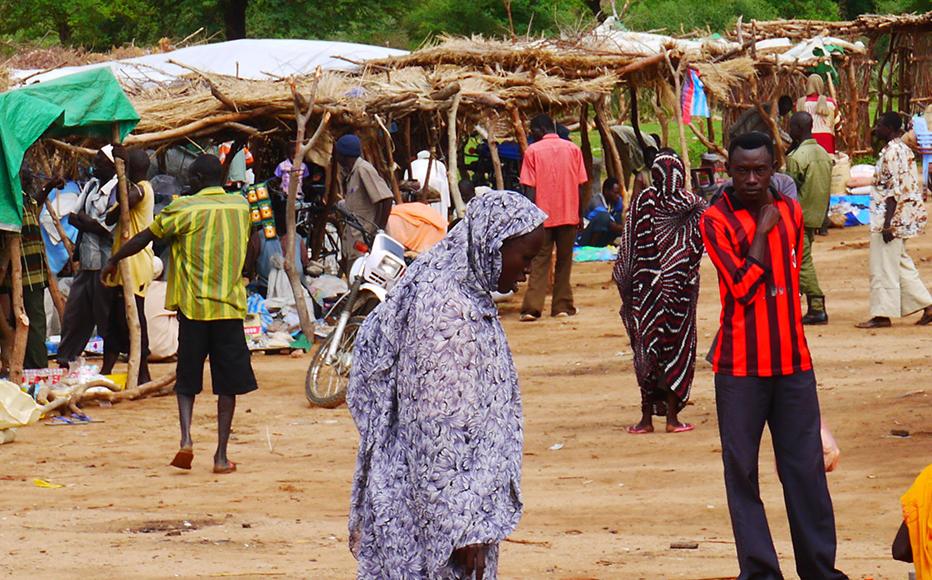 The market in Gidel, in the Nuba Mountains of Sudan. Picture from 2012. © Ilona Eveleens
The link has been copied

In the Nuba Mountains of Sudan, information of any kind is in short supply amid an ongoing insurgency, but listeners around the town of Gidel are now getting a weekly radio show focusing on women and with a lot of input from local reporters.

Nadhrat al-Shafafa (or “Transparent View”) is a weekly 20-minute magazine-format programme that covers issues affecting women and children. It is broadcast by Voice of Peace, a radio station based in Gidel, in the South Kordofan province of Sudan, as well as by six stations located on the other side of the border in South Sudan. All seven are part of the Catholic Radio Network (CRN).

Nadhrat al-Shafafa is a collaboration involving reporters from all seven partner radio stations who have been trained and mentored by IWPR. Most of the reporters are women.

One of the two men involved is Kochollo Reagen, a Voice of Peace reporter and a regular contributor to Nadhrat al-Shafafa.

“When I first got involved in the women’s programme, my male colleagues made fun of me. But now they realise how important it is and the quality work we are doing,” he said while attending a training session in the South Sudanese capital Juba. “Things won’t change overnight, but the situation for women is changing slowly.”

Voice of Peace has a reach of 60 kilometres, covering part but by no means all of the Nuba Mountains. It provides a real alternative to Sudanese government radio, in a region starved of media and of information sources.

The recent phase of conflict in the Nuba Mountains dates from 2011, when South Sudan became a separate country. Rebel forces operating in South Kordofan have been countered by Sudanese government offensives and bombing that often targets civilians suspected of backing the insurgency.

The authorities have disabled phone connections in the Nuba Mountains, making radio even more important as a lifeline. Voice of Peace radio’s director is Sister Mary Carmen Galicia Alfaro, who communicates via a satellite link. The transmitter itself mainly runs on solar power.

CRN’s radio stations in South Sudan organise phone-ins after each Nadhrat al-Shafafa edition, but with no landline or mobile connections in Voice of Peace’s area of coverage, this is impossible.

Sister Mary Carmen explained that to engage with listeners and gather feedback, the station has arranged for “listener groups” to get together to hear the shows and come up with comments. Most groups are mixed, although one consists of women only, and another based at the local hospital is all-male.

“Some of these groups have their own reasons for getting together, while we organised others just to get feedback for our programmes,” she told IWPR by email. “We have given the groups radios so that they can listen to our programme. Participants are often very willing to tell us what they think about the programmes and topics.”

Feedback from one male participant in a listener group, following a Nadhrat al-Shafafa feature on violence against women, demonstrates the important role that radio can play in encouraging people to challenge traditional attitudes.

“All people are of the same blood, so it is unjust to mistreat women,” Ali Baba Musa, a Muslim cleric, said. “To me, it’s business as usual to cook or bathe the children when my wife is doing other work or isn’t around.”

After another Nadhrat al-Shafafa programme on female literacy, Chichiya Kawa Kuku, a member of a feedback group, said radio could provide the nearest thing to an education for women who never finished school.

Her fellow group member Ramadan Kome, a schoolteacher, urged women to “read whatever you can lay your hands on, or attend workshops and listen to what people have to say. Knowledge is available all around.”

According to Sister Mary Carmen, “The one complaint from the groups is that they only have a limited number of radios, whereas they’d rather like to have one set for each member. Nevertheless we encourage them to go ahead with what is available.”

The Nadhrat al-Shafafa series ran in 2012-13, and the project has now resumed with more radio stations involved.

Fourteen journalists (12 of them women) started work on the show after training sessions last November and in March 2015. Two female editors based in Juba compile the separate audio reports coming in from participating stations, and also commission extra material from the network. Reporters from at least four different stations research each Nadhrat al-Shafafa episode, giving the programme a broader range of outlooks.

The Nadhrat al-Shafafa programmes are funded by the Ministry of Foreign Affairs of The Netherlands and by the European Commission.