Journalists have heard the stories of fighters going off to Syria. Now they’ve had a chance to visit an area said to be a hotbed of radical Islam.

Journalists have heard the stories of fighters going off to Syria. Now they’ve had a chance to visit an area said to be a hotbed of radical Islam. 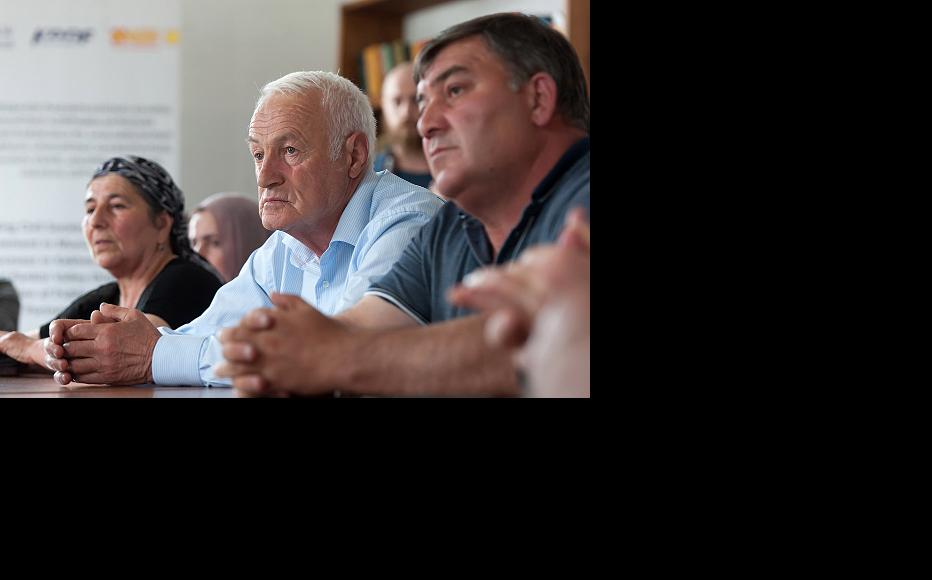 When two teenagers from the Pankisi Gorge went to join Islamic State insurgents in Syria this April, Georgian media rushed to cover the story. But few journalists went beyond the headline news to find out what was really going on in this part of their country.

Most of the Georgian nationals known to have travelled to Syria come from the Pankisi Gorge, located in the Caucasus mountains northeast of the capital Tbilisi. Given that this is a Muslim area with close ties to Chechnya, it seems an easy story to write.

But as a source of Islamic State volunteers, this tiny community pales in comparison with countries from Western Europe and Central Asia, from which many more have gone. It is hardly surprising that locals sometimes feel they are being made scapegoats for a global problem.

“I don’t tell the media what I think,” one woman from Pankisi told IWPR. “I don’t want someone’s unprofessional approach to become a cause of inter-communal conflict.”

To encourage more balanced reporting that presents a rounder picture of the situation, IWPR’s Georgian office took a group of journalists to Pankisi this month to talk to community leaders and other residents. The eight journalists work for a range of media outlets in Georgia, including Democracy & Freedom Watch, the Humanrights.ge site, Studio Re television and the InterPressNews agency.

The Pankisi Gorge is mostly inhabited by Kists, a Muslim ethnic minority numbering somewhere over 8,000 and related to the Chechens of the North Caucasus. There are also Chechens, from an influx of refugees escaping conflict in the 1990s and early 2000s. Up to 1,000 of them have been naturalised as Georgian citizens.

The eight journalists travelling with IWPR stopped in Duisi, the main settlement in the Pankisi Gorge, to meet the local Council of Elders and Women’s Council, as well as staff from Kakheti Regional Development Fund, before visiting mosques and talking to local people.

"It was really interesting and informative for me. I got more interested in this issue and in the near future I plan to visit Pankisi," Natia Gogolashvili, a journalist with Humanrights.ge, told IWPR later.

At a Duisi community centre, boys played table tennis outside while girls made crafted felt artworks in a side room. Other teens lingered on the balcony.

Inside the centre, IWPR hosted a group discussion on Islamic radicalisation among young people in the area. Speakers raised concerns more and more people were turning to conservative interpretations of the faith, instead of the less dogmatic practices they felt were traditional to the area.

Even the community centre no longer plays music, so as to remain as inclusive a space as possible. Young men and women who adopt conservative views will not listen to music, still less or dance, and are therefore liable to be left out of cultural events.

The participants attributed the pace of radicalisation to powerful online propaganda. There was also agreement that recruiters within the community play a role.

“Since people are still leaving, that means someone is doing this,” Zarina Tsatsieva, a member of the council of female elders, told IWPR. “It’s just that no one dares say it out loud.”

Georgian police recently detained four men in connection with terror-related offences. One man, from a village in Pankisi, is alleged to have been recruiting for Islamic State using social media and other websites and religious literature. The three others had bought tickets to Turkey and were suspected of planning to join Islamic State in Syria.

There are no exact figures for how many Georgian nationals have gone to Syria to fight; some estimates put the number as high as 200.

One of the discussion participants said that because so many Georgians travel to Turkey for work, families in Pankisi often did not know their children were in Syria until the news came that they had been killed.  Community leaders believe at least a dozen people from Pankisi have died in Syria so far.

For some of the participants in IWPR's discussion, one solution was clear – better education in Islam.

“Religious classes should do more to give the right explanations to kids,” said a member of the Council of Women. “We must keep on explaining the peaceful aspects of religion.”

Onnik James Krikorian, a British journalist and counter-terrorism consultant based in Tbilisi, joined the discussion, and said he would use this Pankisi visit as an example when he talked about narratives and the media at an upcoming OSCE counter-terrorism conference in Vienna.

“Discussion was open and touched upon issues ignored by others. Great to observe,” Krikorian wrote on Twitter. “Worth pointing out that despite problems w/ radicalisation, seemingly the same type as elsewhere inc. the UK, the area is otherwise peaceful.”

After the trip, the journalists who took part began producing stories on Pankisi and Islamic radicalisation in Pankisi. Inga Popovaite wrote about the demand for classes in mainstream Islam for Democracy & Freedom Watch, and Natia Gogolashvili covered both Chechen refugees and the flow of young people going off to Syria, in a piece in Georgian  (and English here) for Humanrights.ge.

IWPR published its own article, authored by Tinatin Jvania and Giorgi Kupatadze and called Keeping Islamic State Out of Georgia.

Heather Yundt is an IWPR trainer and multimedia producer, based in Tbilisi.

Georgia
Conflict resolution
Connect with us