Consensus for tolerance needed in the face of widespread hostility to Rohingya minority.

Consensus for tolerance needed in the face of widespread hostility to Rohingya minority. 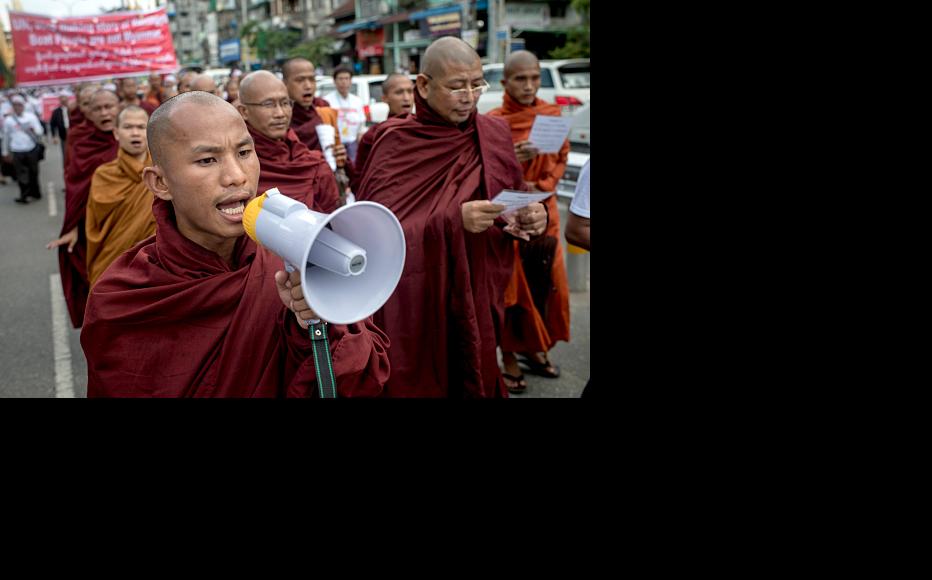 Buddhist monks demonstrate against the UN and the return of Rohingya Muslims, May 2015. (Photo: Jonas Gratzer/Getty Images)
The link has been copied

IWPR is launching its first project in Burma this month to monitor and report on hate speech, and to promote public debate and tolerance.

The transition from decades of military rule has brought Burma (Myanmar) political reforms, greater freedoms and a new openness to the outside world. But one area where the authorities remain unwilling to engage concerns the plight of the Rohingya people – a minority Muslim group in a majority Buddhist nation.

In 2012, stifling censorship rules governing the media in Burma were relaxed. This welcome step had an unhappy side effect, however, as people abused freedom of expression to incite hatred and violence against the Rohingya. Leading Buddhist monks claiming to speak in defence of national unity have sought to establish and root an anti-Muslim narrative, which increasingly now seems to be driving national policy and highly discriminatory laws.

In recent months, there has been a concerted attempt to strip the Rohingya of all remaining rights, including right of residence and the vote, by taking away that ID cards that gave them some legitimacy and showed they had a history in the country. The government and many people refuse even to acknowledge the term “Rohingya” and maintain they are Bengalis with no right to live in Burma, although many of them have been settled there for generations.

In the recent nationwide census organised by the international community, the Rohingya were left out of the count by those tasked with recording the population.

Many Rohingya have chosen to flee Burma, risking perilous sea journeys rather than face attack and increasing marginalisation and persecution at home.

IWPR’s Asia Director, Alan Davis, who designed the Burma project, says the rise of hate speech is very reminiscent of what he observed while reporting on the break-up of Yugoslavia in 1991, the same year he also first visited Burma on assignment as a journalist.

“Reliable, independent international observers are increasingly alleging that what is happening to the Rohingya in Myanmar is akin to ethnic cleansing,” Davis said. “Yet even to hint at that inside the country would lead to serious trouble. The international community is privately torn between helping push forward on reforms that will help the majority, and the danger that the Rohingya will be left in a kind of no-man's land.”

“As in Yugoslavia in 1991, the omens look bad, but that only underlines the need to organise, stand up and speak out about what is happening,” he says. “There is no way Burma can develop into a democratic state if it promotes ethnic discrimination. It’s therefore crucial to change the mainstream traditional and social media narratives around the Rohingya.”

Monitoring of discourses in the traditional and social media will expose the narratives of hate speech, and thus inform public education, information and advocacy efforts. IWPR will encourage constituency-building and networking among progressive NGOs and citizens keen to engage, monitor, speak out and campaign. We will also train practicing journalists in professional media skills, and deliver targeted courses for the editors and senior reporters who shape editorial policy.

Davis, who has long experience of leading anti-hate speech projects for IWPR, in the Balkans and elsewhere, comes to this project with a sense of the sensitivities involved.

“To challenge and help change the established national narrative that suggests that all Rohingya and Muslims are somehow a threat to Burmese culture and identity, we have to be very careful and strategic in our approach,” he says. “Both government and popular opinion are on the wrong side of international law. To contest the negative narrative, we will need to listen and learn.”

According to Davis, “the fact that Aung San Suu Kyi’s own statements on the Rohingya have been so ambiguous only shows the size of the challenge we face. Even as Western observers increasingly question Suu Kyi’s ambivalence, she faces criticism from the Buddhist nationalist movement for being ‘too sympathetic’ to the Rohingya.”

The 12-month project in Burma is being supported by the Peace Support Fund, an international donor initiative launched by the UK Department for International Development.

For more information on the forthcoming project and how you can help, please contact Alan Davis at alan@iwpr.net.