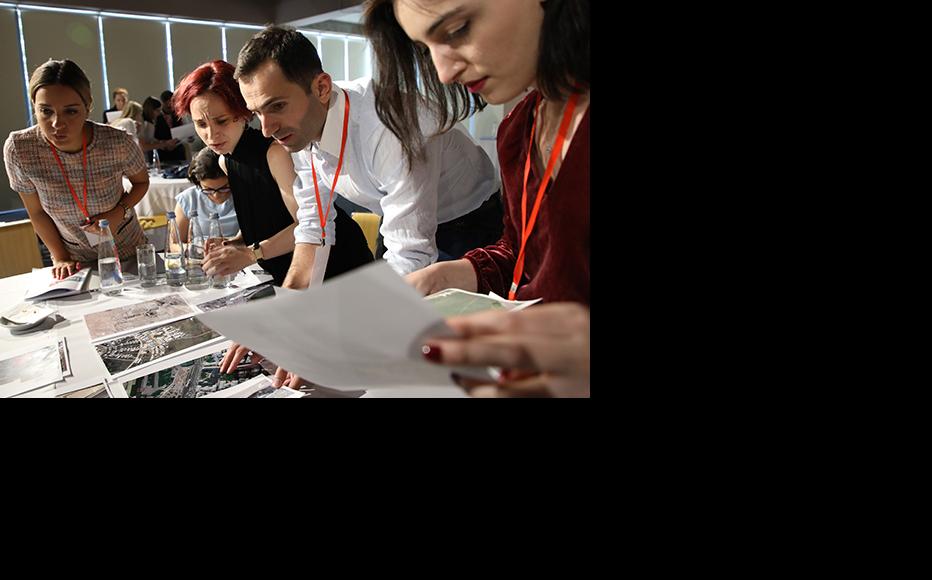 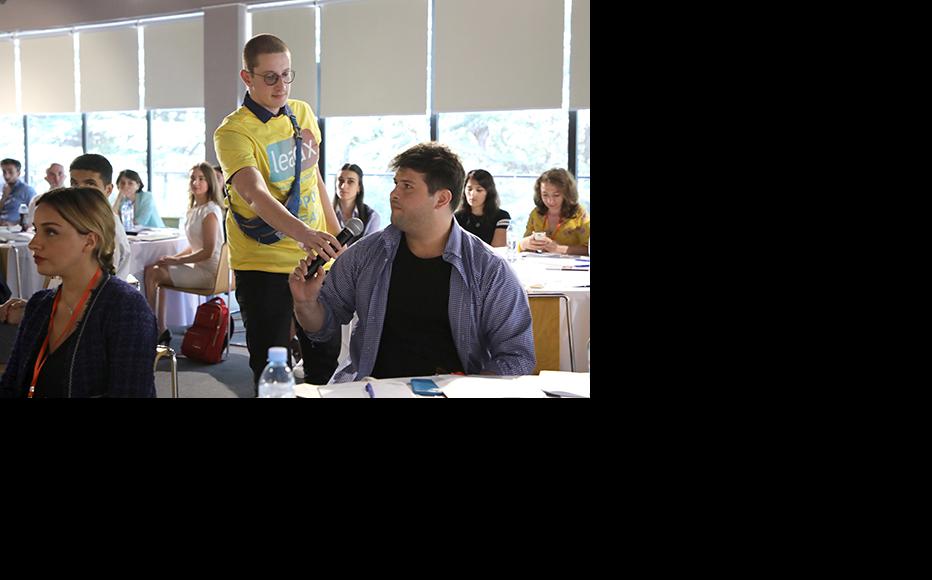 Ruslan Asadov, a participant and project coordinator at Akinchi, poses a question to one of the speakers on LEADx day 1. (Photo: Davit Mdzinarishvili) 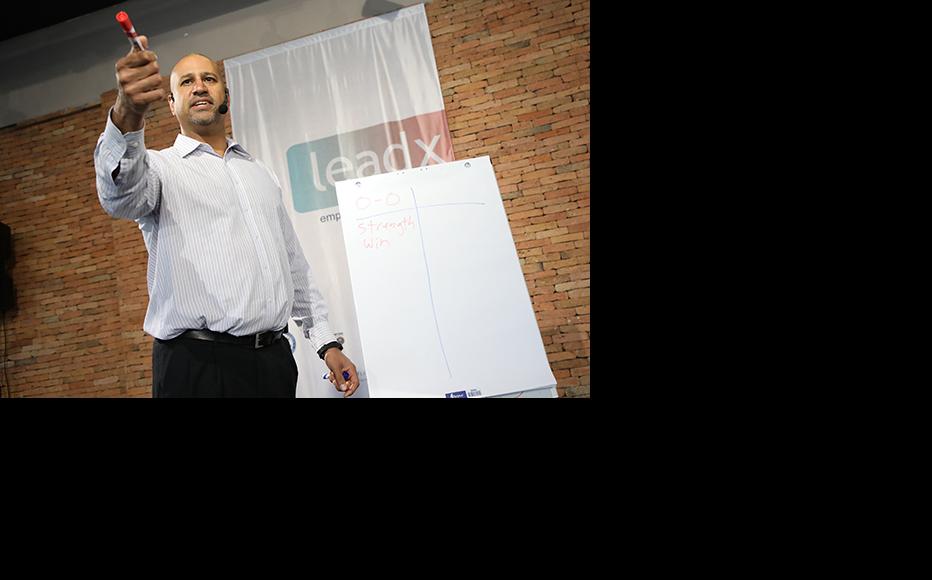 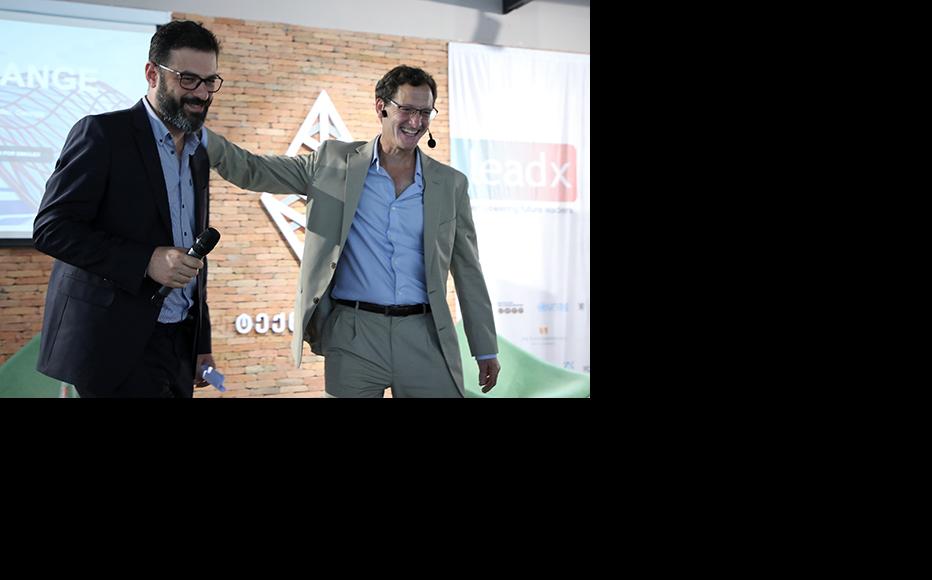 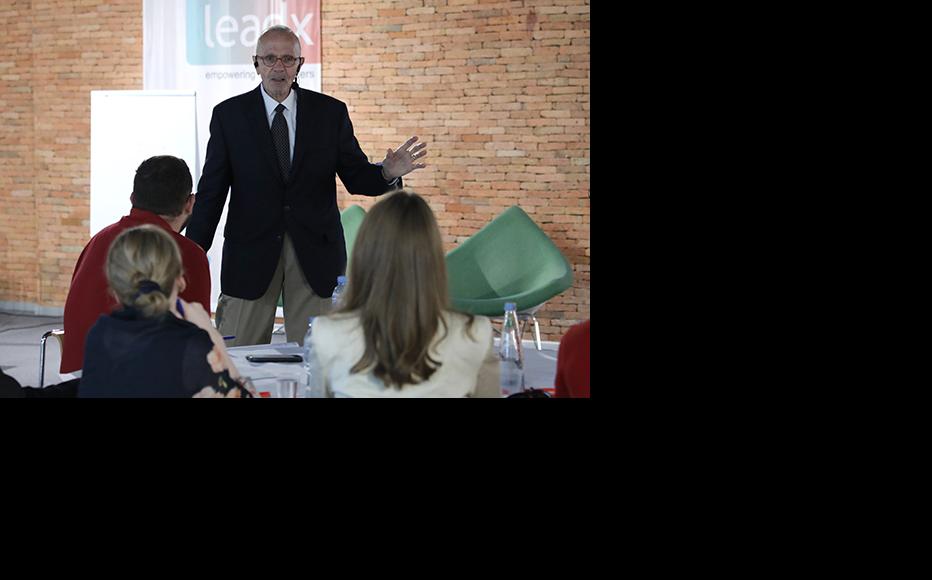 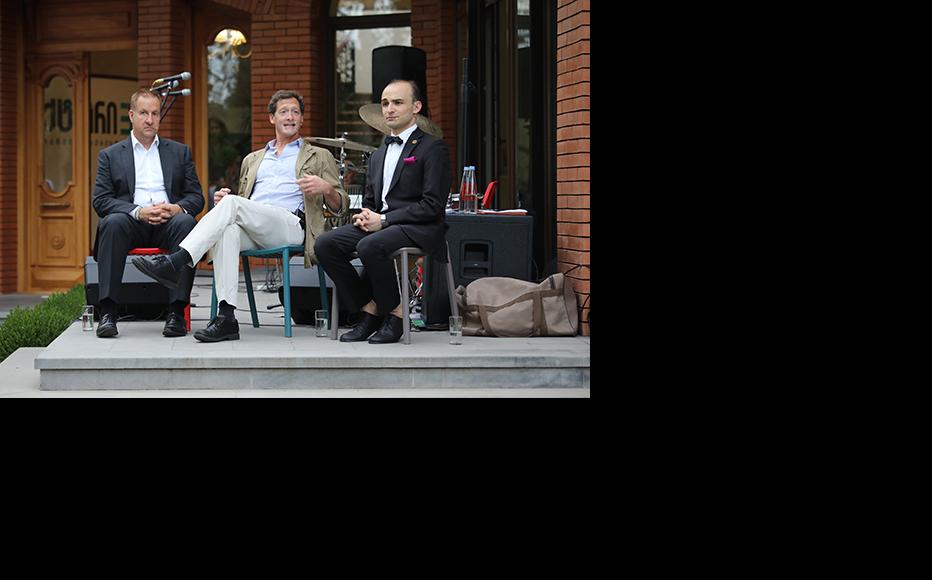 Andres Ilves, Coordinator of FakeWatch, Anthony Borden, CEO & Founder of IWPR, and Zviad Adzinbaia, founder of Leadx and a Fletcher School non-resident fellow, speak at the Closing Ceremony. (Photo: Davit Mdzinarishvili)
The link has been copied

LEADx Change brought regional professionals from academia and media, as well as the public, private and nonprofit sectors together to learn about disinformation and developing technologies.

IWPR, the Fletcher School of Law and Diplomacy and the United Nations Association of Georgia (UNAG), with support from the United States Embassy partnered to host the event at Tech Park, a hub for technological innovation in the Georgian capital.

Some 40 young change-makers from Georgia, Azerbaijan, Armenia, Ukraine and Moldova took part in an event intended to help boost civil society resilience to both internal and external threats.

“Therefore, I believe it is imperative that not only the governments but as well as the societies - communities from bottom-up are well equipped with the necessary skills and knowledge that would help them to better manage the crisis. LeadX has played and hopefully will continue to play the role of transferring vital crisis management skills and knowledge to the young leaders.”

Other events included a SIMULEX exercise, an intensive crisis-management simulation in which participants represented world actors negotiating a crisis in the Black Sea region and the middle east. Over 100 participants from government, private, civil society and media sectors were involved in the multidisciplinary exercise.

Speakers included Richard Shultz, a professor at the Fletcher School of Law and Diplomacy and tech experts such CISCO Technical Solutions Architect Ali Shaikh, who said that protecting citizens from false information was “an ongoing and evolving task”.

“Small countries like those in the Caucasus have the advantage of being less encumbered by resistance to making the necessary transformational changes that often plague larger nations,” he continued. “This places these countries in an ideal place to be innovative and creative, and be the leaders of a more modern technologically enabled democracy.”

Events such as Leadx were critical to ensuring positive change, Shaikh added.

“It connects people globally, allowing us to build stronger networks and effect positive change. The potential for Leadx is incredible, and will only continue to grow.”

In a session touching on how emerging technologies affect journalism, Lydia Kostopoulos  - a senior researcher at the European School of Management and Technology  - highlighted Virtual Reality (VR) as a potential tool to boost audience empathy.

“I believe that VR has tremendous potential to help people have an embodied experience into the lives and situations of others,” she said. “Reading about conflict, natural disasters and human rights injustice helps one understand, seeing pictures of these situations puts faces, colour and visual context to the story, while VR places a person inside the location where they are visually immersed in the situation, this allows them to feel what it is like to be there.”

“As a journalist, I believe words matter, tone matters, and leading by example matters. These main threats – violence, propaganda, and a global tone hostile to an independent press – are not trends that we at IWPR or I suppose any of us envisaged those many years ago when we began our efforts,” Borden said. “But does that lead us to a counsel of despair? Not in the least. It takes me back to my simple thesis, that is: free and critical voices – your voices – matter now more than ever before.”

Nika Vetsko is an IWPR contributor based in Tbilisi.

Giving Voice, Driving Change - from the Borderland to the Steppes
Caucasus, Moldova, Ukraine
Journalism, Media, Empowerment
Connect with us