IWPR takes Georgian reporters to a village on the fragile boundary with South Ossetia.

IWPR takes Georgian reporters to a village on the fragile boundary with South Ossetia. 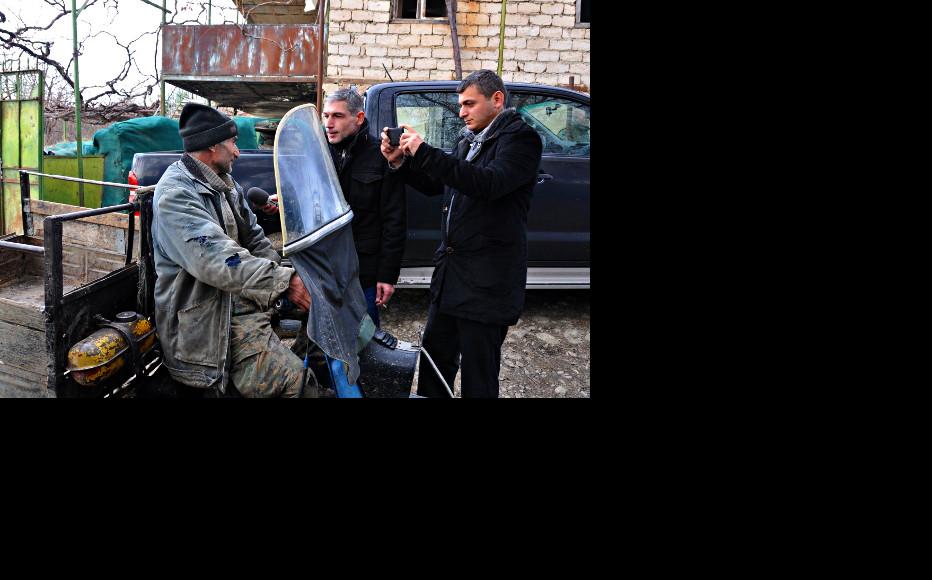 Journalists interview a resident of Zardiantkari as he crosses a Georgian police checkpoint. (Photo: Heather Yundt/IWPR) 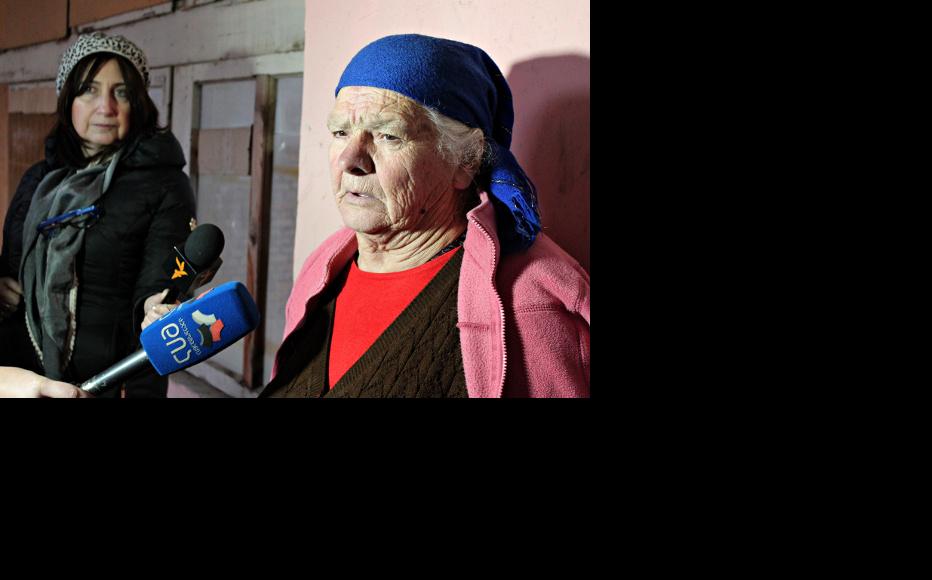 Leila Mklasvishvili, from Zardiantkari but still living in a kindergarten in Gori, shares her story with journalists. (Photo: Giorgi Kupatadze/IWPR) 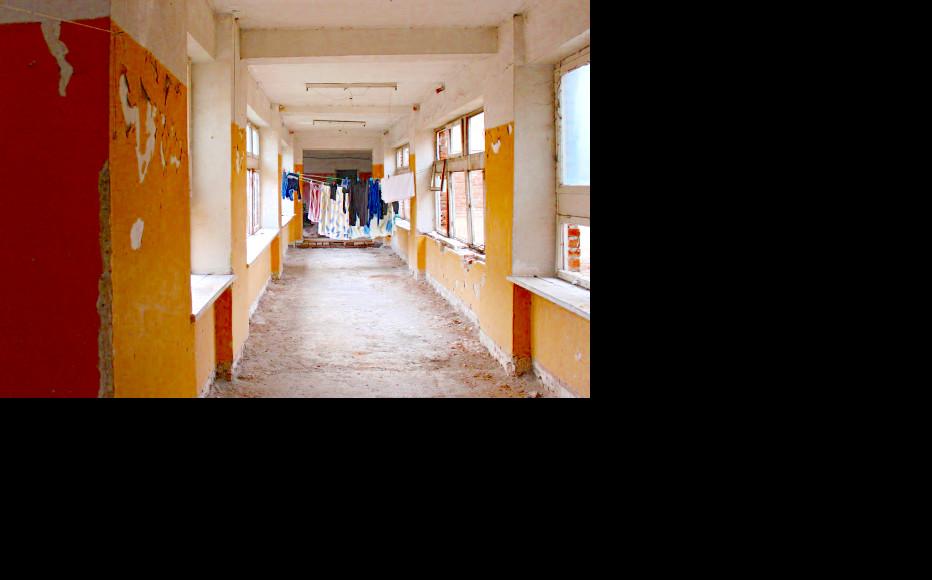 The kindergarten where refugees from Nikozi and Zardiantkari still live. (Photo: Giorgi Kupatadze/IWPR) 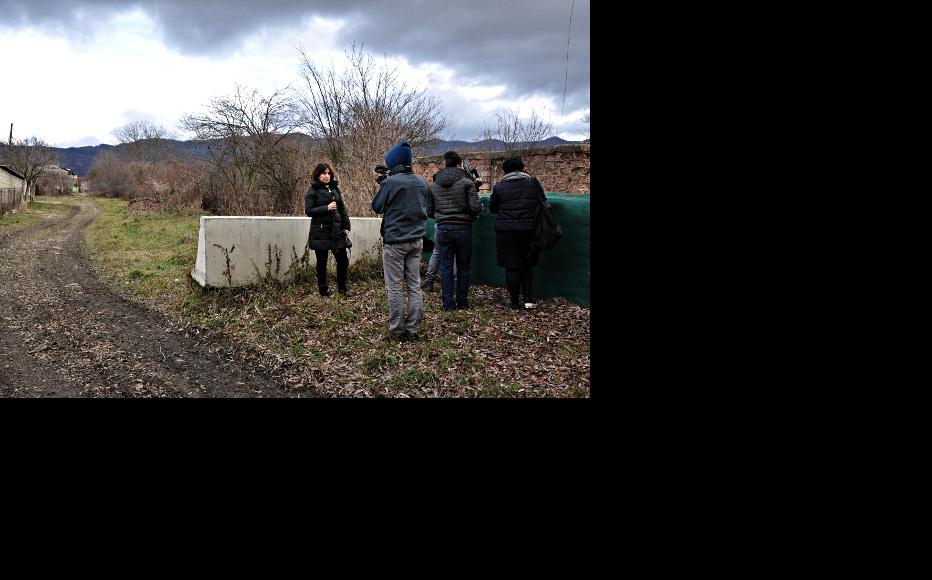 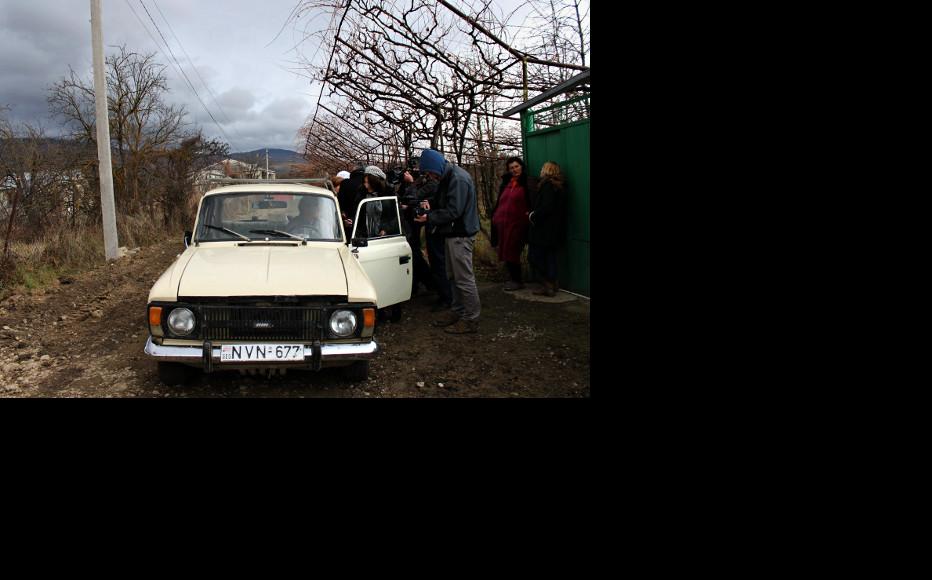 Interviewing a resident of Zardiantkari. (Photo: Giorgi Kupatadze/IWPR)
The link has been copied

Down a road thick with mud, through several villages, and past two Georgian police checkpoints, we reach our destination, the administrative boundary with South Ossetia.

At the third and final checkpoint, Georgian police in camouflage stand at the ready with guns at their sides.

About 100 metres further along the road, Russian soldiers watch us from their own checkpoint.

Along the Administrative Boundary Line, as it is known, there are still villages sandwiched between Georgian and Russian checkpoints like this.

The boundary line has been patrolled by Russian troops since the August 2008 war. After the Russian army invaded and pushed back Georgian troops, Moscow formally recognised South Ossetia as a sovereign state, and did the same for Abkhazia, another territory that has claimed independence from Georgia since conflict in the early 1990s. All but a handful of countries continue to regard both entities as part of Georgia.

Zardiantkari, now largely emptied of its inhabitants, is one of these “in-between” villages. More than six years after the August 2008 war between Russian and Georgian war, the remaining residents live in a kind of limbo. Their voices are rarely heard in the Georgian media.

To give them an opportunity to tell their stories firsthand, IWPR brought a dozen Georgian broadcast journalists here on a chilly day in late December.

“It is absolutely right that journalists are here,” said Marina Vashakmadze, director of the Georgian bureau of Radio Free Europe/Radio Liberty (RFE/RL) and head of the Tavisupleba Media School. “To understand the issue, to tell the truth, you have to visit the field frequently, listen to people and witness the situation on the ground.”

When the fighting began in August 2008, many of Zardiantkari’s ethnic Georgian residents fled their homes and went to Gori, the main regional centre, where they found shelter in a kindergarten. Many did not feel they could safely return home because the village was beyond the Georgian police checkpoints.

But because the village was not classed as being under military occupation, the villagers could not claim the status of internally displaced persons. Without this status, they were not eligible for certain rights and benefits, including access to welfare and healthcare.

Security concerns plus a basic lack of resources prevent Georgian journalists from reaching villages like Zardiantkari. To address this, IWPR organised this reporting trip for 14 journalists. Starting in the Georgian capital, IWPR staff travelled withTbilisi-based journalists to Gori, where they were joined by journalists based there. While the group was in Gori, representatives of the Saferworld NGO and the local office of the Georgian Young Lawyers Association briefed them on the kind of problems that face people in Zardiantkari.

“The whole event was very positive,” said Natia Nadiradze, a project coordinator with Saferworld. “I welcome any initiative which is aimed at raising awareness among journalists based in the capital, and consequently among a broader Georgian audience, about the situation along the Administrative Boundary Line.”

The journalists then set off for Zardiantkari, where they spoke to people living there.

“The mission was very interesting and unforgettable for me,” said Teona Goderdzishvili, a journalism student at the Georgian Institute of Public Affairs. “It was very important to meet the local residents and see everything with my own eyes, because the situation on the ground is very different from the picture described by media. In fact, there are very few reports covering the stories of these people.”

On their way back, the group stopped off in Gori, where they visited the kindergarten where some Zardiantkari residents still live.

Grigor Mklasvishvili, an elderly man who lives there with his wife, told his story of being forced to flee Zardiantkari.

“The journalists asked the right questions,” he said. “I can’t go back. The house, the plants on our plot… everything was damaged during the war. The two of us are too old to cope with that on our own.”

After the reporting trip, participating journalists from Radio Imedi, Dia TV, Trialeti TV and Radio Kviris Palitra produced multimedia reports, and two articles were published by 17Maisi.org and a Georgian-Ossetian reconciliation project called KartlOsi. Other media outlets, too, followed up with their own reports on Zardiantkari.

The trip was part of IWPR’s continuing work to engage with people on either side of the boundaries with South Ossetia and Abkhazia and to highlight both the challenges they face and broader issues around conflict resolution.

“IWPR reporting missions aim to give a voice to the most unheard and voiceless. We were privileged to be there with experts and journalists who make their best effort to understand the issues facing communities on the front line,” said Beka Bajelidze, IWPR's Caucasus Regional Director. “The place we visited is an ethnically mixed Georgian-Ossetian village where the values of trust, wisdom and tolerance have endured harsh trials and shown themselves to be fundamental to building a lasting peace.”

Heather Yundt is an IWPR trainer and multimedia producer, based in Tbilisi.

The trip was conducted under the programme Strengthening Capacities, Bridging Divides - Reducing Tensions Across the South Caucasus, funded by the Norwegian foreign ministry, and and the project Women Connecting for Peace – The Voice of Change, supported by UN Women.