Event hears that falling oil and gas prices may be a barrier to implementing greener policies.

Event hears that falling oil and gas prices may be a barrier to implementing greener policies. 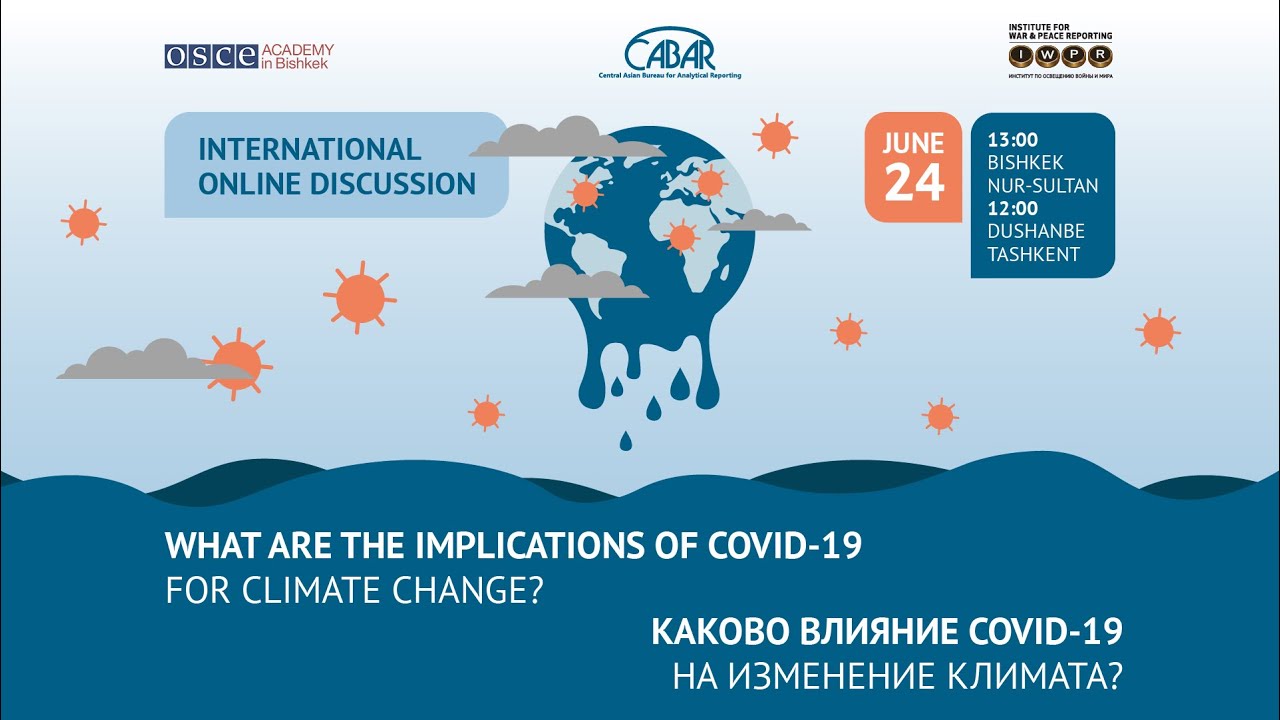 Central Asia, Covid-19 and Climate Change
The link has been copied

Governments around the world will struggle to translate the immediate environmental benefits of global Covid-19 lockdowns to long-term gains, according to an IWPR discussion on the pandemic and climate change.

The online event, hosted by IWPR Central Asia, its CABAR.asia analytical platform and the OSCE Academy in Bishkek, also warned that the region would find falling oil and gas prices a further barrier to implementing greener policies.

Chaired by OSCE Academy postdoc research fellow Mirza Sadaqat Huda, speakers at the June 24 discussion all stressed that the pandemic had led to an unprecedented fall in CO2 emissions.

But, as OSCE Academy post-doc research fellow Rahat Sabyrbekov emphasised, it remained unclear how sustainable this would be.

“While we witnessed many benefits of the shutdown in the form of cleaner air and restoration of biodiversity, the economies are being re-opened to provide jobs and incomes,” he told the online gathering. “Now there are discussions on how to re-open the economies and how we can retain low carbon emission levels? There is no global consensus on this, but it is important to see that Covid-19 has shown that the cutting global emissions swiftly is possible.

Sabyrbekov noted that many governments wanted to try to maintain momentum and implement so-called green recovery plans to re-open their economies. The EU, for example, had announced a billion-euro package towards this end.

“But there is another opposing way to how the governments see the recovery,” he added. “For example, the US, Mexico, South Africa have relaxed environmental regulations due to the pandemic to revive the economies.”

Troy Sternberg, a British Academy post-doc research fellow in Geography at Oxford University, said that the crisis had provided “an opportunity to re-examine the structures we have, set up in how we work and what we expect of each other”.

In the Kyrgyz context, he continued, this was the time “just to step back and see what type of business investment, engagement and infrastructure people want”.

This could have particular implications regarding the Chinese Belt and Road initiative, he continued, as well as providing an opportunity to look at more sustainable practices in areas such as mining and agriculture.

“Covid-19 can be an opportunity to improve [both] investment and environmental interaction in Kyrgyzstan,” Sternberg concluded.

Timur Idrisov, senior advisor at the Little Earth ecological NGO in Tajikistan, agreed that the short-term benefits had been spectacular, predicting that total carbon emissions could decline between four and 4.8 per cent by the end of this year.

“However, people should not believe that Covid-19 will somehow solve climate change, especially in the long-term… therefore, we need an urgent fundamental shift and this is not happening yet. It is vice versa: the governments are protecting the oil companies.”

The only way to bring real change, he continued, was to focus on long-term solutions for carbon neutrality, biodiversity, sustainable agriculture and renewable energy efficiency.

Energy security expert Farkhod Aminjonov, the founder of the Central Asian Institute for Strategic Studies in Kazakstan, noted that CO2 emissions had dropped by 1.4 per cent immediately after the 2008 financial crisis. However, they went on to jump six per cent in 2010.

In addition, a further financial crisis could not create conditions that favoured greener policies, Amonjonov continued.

“Covid-19 threatens the local efforts to meet climate commitments due to the loss of economy during the lockdown,” he said. “For instance, Kazakstan – which signed the Paris agreement and has a goal to reduce 25 per cent of its CO2 emissions - is facing economic difficulty. Falling prices in oil and gas are a barrier to reach green economy initiatives.”

This did not mean that the transition to more sustainable processes could be delayed indefinitely, Amonjonov said.

“The investment is up to 90 billion US dollars (in Kazakstan alone) and the pandemic, which is affecting the revenues of Central Asian countries, is causing a major risk to the transition to renewable energy.”

Coronavirus Pandemic, Giving Voice, Driving Change - from the Borderland to the Steppes
Central Asia
Environment, Coronavirus, Economy
Connect with us