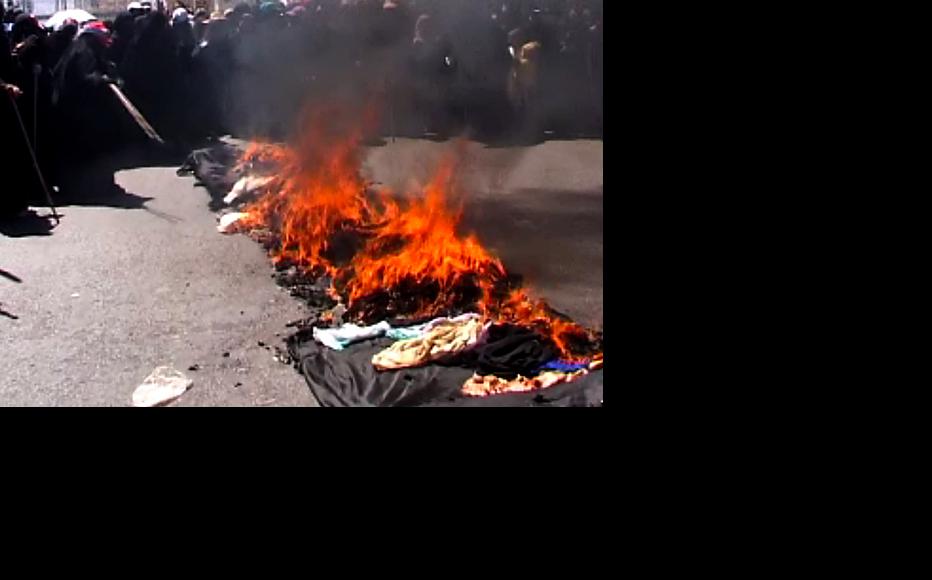 Yemeni women protest in Sanaa. (Photo: Avaaz)
The link has been copied

Hundreds of women protested in Sanaa on October 26, burning veils and headscarves, in an act of defiance against the government.

Their march in Yemen’s capital followed an upsurge in security force actions in recent days.

Despite a ceasefire announced by President Ali Abdullah Saleh late on October 25, local media sources reported that as many as 25 people had been killed overnight in the capital Sanaa and the city of Taiz.

Among those reported dead were three female activists, who were allegedly targeted in their homes.

The killings ignited widespread anger and emboldened hundreds of female protesters – many of them wearing the niqab, a traditional veil that completely covers the face – to take to the streets for the October 26 protest.

“We gathered here for the first time to burn our veils and headscarves (a cry for help in Bedouin culture) [and] condemn the attacks on women by the government,” said Salma al-Kulaibi, a woman who participated in the protest.

“We want freedom and democracy. President Saleh is killing women. We cannot defend ourselves, but we can burn our veils. He is a coward to kill women and that is why he will never be accepted by the people. Where are the loyal men in Yemen to help us defend our dignity against the oppressive regime of Saleh?”

Yemeni women have grown in confidence since the uprising began in February, participating in protests despite their often lowly, marginal status in society.

Letta Tayler, a researcher at Human Rights Watch, said they had a key involvement in the revolution.

“Women have played a pivotal role in the uprising - so much so that President Saleh, last spring, made a speech in which he tried to depict their participation in protests as against Islam,” she said.

“Attacks such as those against women underscore the need for Saleh to leave office.”

The demonstration illustrated the extent of the frustration amongst female activists, Hakim Almasmari, editor of the Yemen Post, said.

“Women have had had enough,” he said. “By burning their face veils they are showing the world what is really going on.

“It’s very symbolic and very rarely happens. They are burning their one form of protection: their veils are in a way their armour, without which they are vulnerable.”

He said that women, although frightened at the prospect of violence during the protest, had defiantly taken to the streets with their children in the hope it would deter government forces from using violence.

“These women know the world’s media is now watching, and President Saleh was [careful] not to attack women as they were with their children,” Almasmari said.

Observers say female activists’ morale has been boosted by the inclusion of the woman campaigner Tawakkul Karman among the three Nobel peace prize recipients last month.

The 32-year-old journalist and opposition figure had played a leading part in the protests, and told the New York Times she wished to dedicate her prize to “all of the youth and all of the women across the Arab world, in Egypt, in Tunisia.

“We cannot build our country or any country in the world without peace.”

Almasmari said that Karman’s activism had not only helped draw the attention of the world’s media but energised female protesters, whom he said would not be deterred by the latest round of violence.

“They really feel empowered now,” he said, “and believe they too can help shape the future and have a chance to succeed, just like men.”

Katharine Helmore is an IWPR intern in London.

The Arab Spring
Yemen
Peace
Connect with us