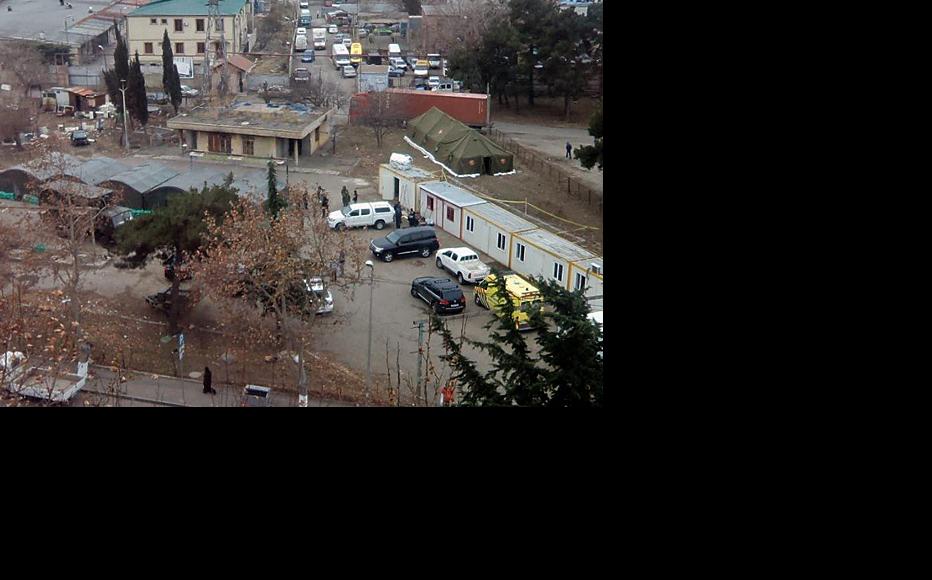 Tented camp for homeless people in Georgia. (Photo: Natia Geguchadze)
The link has been copied

Georgia has established temporary refuges for homeless people this winter, but campaigners are calling for a more sustainable strategy to address their problems.

The Georgian government has a legal obligation to provide housing for everyone, but each winter, homeless people freeze to death on the streets.

A public campaign last autumn led a government commission to recommend that tent encampments be created in towns and cities to give people somewhere to stay.

Municipal workers in the capital Tbilisi erected tents on Moscow Avenue on December 11. Open to anyone, the tents have wood-burning stoves, and the camp has a medical centre and a canteen.

“We are called tramps and barely considered human, but we’re people just like everyone else,” Nodar, 60, now living in one of the tents, told IWPR. “I had a house and family once, but I ended up on the streets when I came out of prison.

“I have slept on the streets for eight years. Now I’m here, and so I’ll probably survive this cold.”

Another resident, Maia, is living here with her children, the youngest 18 months old.

“My husband beat me and the children, so we left him. I haven’t had a home for five months, and I’ve been living here and there. I’ve been on the streets for the last few days,” she told IWPR.

Zurab Utiashvili, head of the emergencies department at Georgia’s health ministry, told IWPR that the camp in Tbilisi houses an average of 170 people a night.

“There are two families with children, and they are living in the same tent. Of the others, 40 people don’t even have identity documents,” he said. “At the moment, homeless people are being registered, and then we will establish their status and their needs. Police and medical services have been mobilised. If they see someone on the streets who is in danger of freezing, they’ll bring them here at once. Six laris [3.50 US dollars] a day is provided for each person.”

Utiashvili stressed that this was just an interim measure.

“Our aim is to stop people dying of cold and hunger on the streets. The facility will be open for the next three months,” he said. “We are working separately on a long-term strategy to help the homeless.”

Until the government comes up with this strategy, homeless people will not be officially eligible for welfare assistance, since this comes with a legal requirement to show proof of a permanent place of residence.

The government was bumped into providing the tents by the NGO Identoba, which said last autumn that it was going to open a centre where homeless people could see doctors, lawyers, psychologists and social workers.

Because Identoba also helps people from sexual minorities, the Patriarchate, the central institution of the Georgian Orthodox Church, objected.

“This organisation contains damaged, sick people,” Father Mikheil Botkoveli, spokesman for the Patriarchate, said in a statement. “We will not spare anyone who shows support for the activities of these people.”

After the Patriarchate’s intervention, Labour Minister David Sergeenko said Identoba would need to clarify which rights of homeless people it wanted to address.

However, the plan did prompt the government to set up a commission which in turn decided to create temporary accommodation.

“We are principally worried about homeless people who are sleeping rough. Our assessments indicate that there are slightly over 200 of them,” Sergeenko said. “Under current laws, it is municipalities rather than central government that have a duty of care for the homeless. But the prime minister has decided to form a commission, and we are drawing up three strategies – short-term, medium-term and long-term.”

“It’s obvious that tents aren’t ideal and aren’t the optimal solution, but people will stay warm this winter,” he explained. “We are also working on a medium-term plan involving the creation of proper shelters. I promise that not one person in Georgia is going to suffer from cold and hunger.”

Ucha Nanuashvili, Georgia’s official ombudsman, said opening shelters was a good idea, but it would not resolve the underlying issues.

“For a long-term solution to this problem, it is necessary to create a comprehensive policy, study the homeless, create a database, build housing and take other measures,” a statement from his office said.

The head of Identoba, Irakli Vacharadze, said the tented accommodation was acceptable, especially since Georgia had no past experience of doing something like this, but more needed to be done.

“Since this wasn’t the government’s own initiative, but merely a response to our initiative, I believe we now need public pressure for a long-term strategy addressing this problem,” he told IWPR. “We can’t wait for the government. We have the support of more than 20 NGOs and we have decided to set up a centre for the homeless.”

Georgia
Humanitarian crisis
Connect with us