What Next For Tunisia?

Uncertainty over prospective road map for the country’s democratic future.

What Next For Tunisia?

Uncertainty over prospective road map for the country’s democratic future. 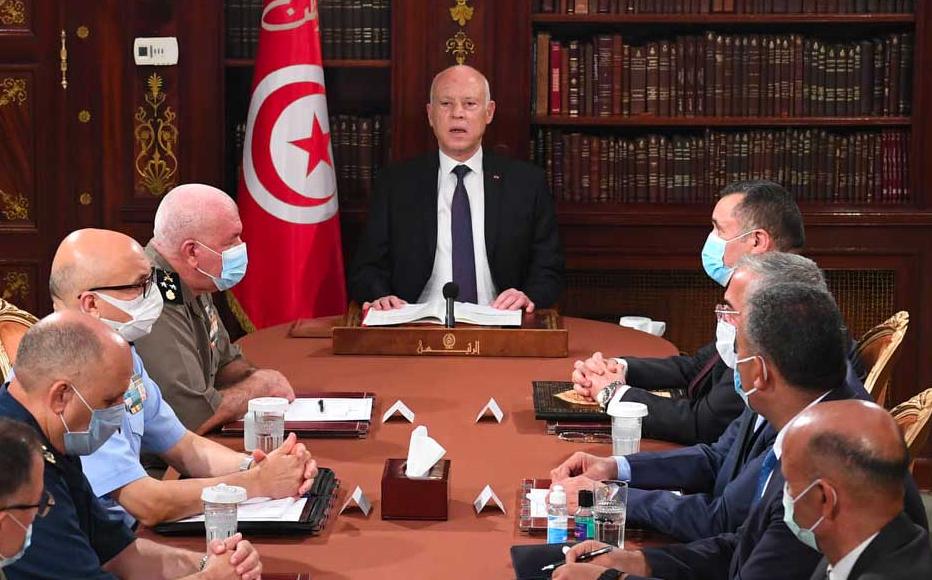 President Kais Saied chairs an emergency meeting with military and security leaders on July 25, 2021. © Presidency of the Republic of Tunisia
The link has been copied

Life in Tunis quickly went back to normal after President Kais Saied’s announcement on July 25 that he would be suspending parliament following months of health, economic and political crisis. Tunisian flags still flutter on some balconies but the streets are quiet, in stark contrast to the jubilant scenes that greeted his decision. People are staying home, partly due to the searing heat and partly to fears of coronavirus infection, with nearly 200 deaths daily. But there is also a sense of expectation and uncertainty, with fears of what the future may bring following such unprecedented steps.

Waiting for her turn at the doctor’s surgery, Lamia, 56, a stay-at-home mother, said she had few hopes that the country would now emerge from its woes.

“All the presidents before him promised to improve our social and economic conditions,” she said. “Then we discovered that they only want power and don’t do anything for the people.”

Others strongly support Saied’s decision to suspend parliament, seeing it as a long overdue strike against Ennahda, the Islamic party that has taken a key role in each government since the 2011 revolution that sparked the Arab Spring uprisings across the middle east and north Africa. Some feel that the president has not gone far enough.

“When is President Kais Saied going to punish Ennahda for the disaster in which it put the country?” asked 70-year-old Zeineb indignantly. “One week after the decisions, its leaders are still free and they are not in jail.”

Tunisians appear divided between those who entirely support Saied’s decisions and others who fear his actions have laid the basis for the creation of a new dictatorship. The only consensus is that a clear road map is needed for the next phase of the country’s future.

Constitutional law professor Slim Laghmani said that Saied’s actions had been partially justified under Article 80 of the constitution, which allows the president to take exceptional and unspecified measures in case of an “imminent danger threatening the institutions of the nation and the security and independence of the country”.

“The evaluation of the ‘imminent danger’ and the ‘exceptional measures’ to be taken are only decided by the president of the republic after consultation with the head of the government and the president of the parliament, which happened in accordance with the constitution,” Laghmani said.

But the article also provides that parliament must remain “in a state of permanent assembly” during this period. Saied suspended parliament for a period of 30 days, renewable according to a July 29 presidential decree, none of which was provided for in the constitution, Laghmani noted.

Other analysts argue that the president’s actions were justified by a situation that saw parliament in continual dispute and even scenes of violence between deputies, with Prime Minister Hichem Mechichi accused of leading a government that served Ennahda’s agenda.

“The failure of the political system reached its peak this year with Mechichi’s government and the promulgation in the parliament of laws that serve only Ennahdha and the governing coalition’s interests,” said Jamel Msallem, president of the Tunisian Human Rights League. “This corrupt system brings only crisis on different levels, that’s why we agreed with the president’s consideration that the country was in imminent danger.”

“Saied took the right decisions to end the political system built by Ennahdha which destroyed the country,” added Néji Jalloul, a former leader of the Nidaa Tounes faction, which beat the Islamic party in 2014 elections. “And if he stops now he may fail and people will not accept that.”

He continued, “Saied succeeded where [Nidaa Tounes] failed, because we were afraid in 2014 of violent reprisals from Ennahda’s supporters if we stopped its reign.”

A July 31 open letter signed by 30 public figures also expressed support and demanded Saied refuse “any dialogue with corrupt people and their return to the political scene”.

Academic and activist Naila Silini, one of the signatories, said that “we wrote this letter to explain to the world that what Kais Saied did was a response to our struggle during a decade to put an end to Ennahda’s system.

“No, we don’t consider that he carried out a coup d’etat, because this party ruined the country, so it was necessary that people protest and then Said listened to their demands”.

However, other civil society groups have expressed fears that the president has gone too far.

Activist Yosra Frawes, the former head of the Tunisian Association of Democratic Women (ATFD), said, “It is legitimate to be worried since we have entered into a phase of an ‘exceptional situation’ which could also be qualified as a temporary dictatorship, as we are not in a democratic transition that led to a distinction between different powers, but all of them are now gathered in the hands of the president of the republic.”

Some representatives of civil society expressed their concerns when they met Saied on July 26.

“We warned him about the danger of the monopolisation of power and taking decisions against fundamental rights and freedoms. Also, we insisted on the necessity to reduce the exceptional period,” said Msallem, who added that the president had assured them he would take their demands into consideration.

Frawes said that such reassurances were not enough, since Saied had failed to announce “a clear road map about his next steps”.

There appear to have been some rights violations including concerning freedom of expression in recent days.

The Al Jazeera office was closed on July 26, and two days later the vice president of the national syndicate of journalists (SNJT) Amira Mohamed and Basem Trifi, the vice president of the Human Rights Tunisian League, were briefly prevented from participating in a programme on Tunisian public TV. The station head said that he had received a military order to ban their appearance; the ministry of defence later published a statement refuting this.

“As a journalists’ syndicate, our biggest worry is that Saied’s exceptional decisions had a negative impact on freedom of the press,” Mohamed said. “It is true that the president of the republic invited the president of the SNJT, the day after the July 25 decisions, to reassure him about preserving freedom of expression, but what we noticed in reality is different.”

Mohamed said that her organisation had recorded a number of attacks on journalists over the last week, as well as difficulty accessing official information and very little communication with the media.

SNJT invited six other leading civil society groups for urgent talks on July 27, after which they issued a joint press release caling on the president to “preserve the revolution’s achievements” and to present “a clear road map with a precise calendar that doesn’t exceed 30 days, about emergency questions, like fighting coronavirus, reviewing the electoral law and the political system and fighting corruption”.

For their part, Ennahda leaders say they recognise their role in the country’s current plight, while denouncing the president’s recourse to exceptional measures and calling on him to organise a national dialogue.

Parliament speaker and Ennahda head Rached Ghannouchi told Agente France Presse on July 29 that “the Tunisian constitution is more important than our retention of power. We are always ready to make any concessions within the framework of a return to democracy and not of the imposition of a dictatorship and a coup d'etat”.

“This popular uprising is legitimate and so are the people’s demands,” said Ennahda deputy Jamila Ksiksi. “Since 2011, we built a political democracy, but we failed to construct an economic and social one.

“In this last period, we entered into a major crisis without any chance of a solution. This lead to a popular outburst, even if I don’t agree with some of the violent practices we saw during the protests. But is the solution to head towards a bigger crisis? I consider that acting outside the constitution is a very dangerous step,” she said.

“That’s why we are asking the president of the republic to present a road map and to return as soon as possible to the democratic process by organising early elections.”

Sociologist Sofien Jaballah said that he feared the president was presenting himself as the spokesman of the people and their only legitimate representative.

“What concerns me the most in Kais Saied’s attitude is that he declared that he is acting in the name of the people,” he said. “His electoral slogan in 2019 was “the people want”. So, he is exploiting the people’s will, and this is very dangerous.”

Hanène Zbiss is an investigative journalist, trainer and teacher of journalism at the Institut de Presse et des sciences de l'Information in Tunis. A mentor with the Marie Colvin Journalists’ Network, she is also president of the Tunisian section of the Union de la Presse Francophone.

This reporting is made possible by the Marie Colvin Journalists' Network mariecolvinnetwork.org, an online community of Arab female journalists.

Tunisia
Democracy, Protests
Connect with us