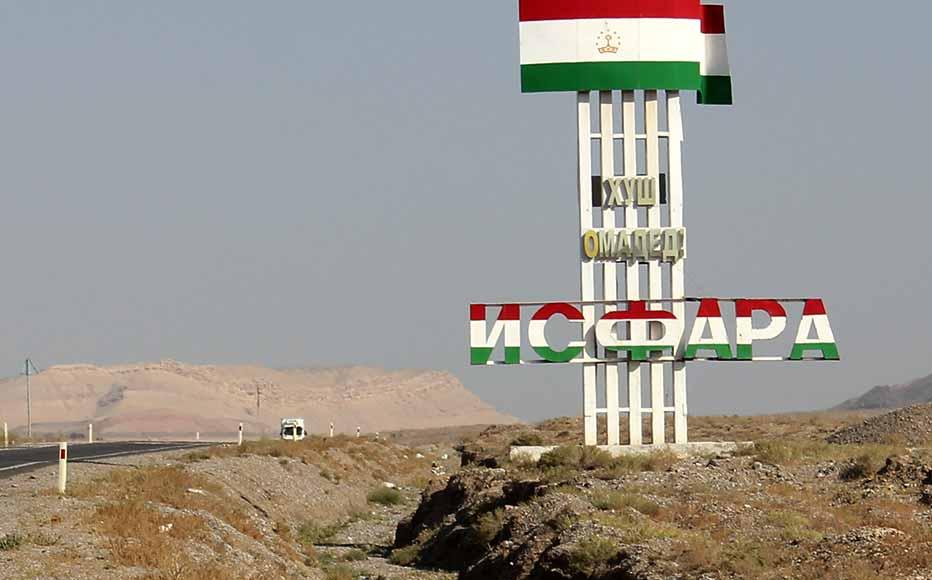 The sign of Isfara, a town in northern Tajikistan, on the border with Kyrgyzstan. The town lies in the homonymous valley which is crossed by the Isfara river. Media reported that the clashes in September broke out along the frontier between Tajikistan's Sughd and Kyrgyzstan's southern Batken provinces because of a dispute over a reservoir and pump, claimed by both sides, on the Isfara river. © IWPR
Photo Essay

Over 100 people died in renewed violence along the border in September 2022 as long-standing issues remain unresolved.

The sign of Isfara, a town in northern Tajikistan, on the border with Kyrgyzstan. The town lies in the homonymous valley which is crossed by the Isfara river. Media reported that the clashes in September broke out along the frontier between Tajikistan's Sughd and Kyrgyzstan's southern Batken provinces because of a dispute over a reservoir and pump, claimed by both sides, on the Isfara river. © IWPR
The link has been copied 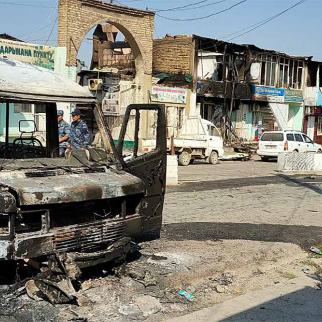 A village in the Leylek District of the Batken region after conflicts. © State Border Guard Service 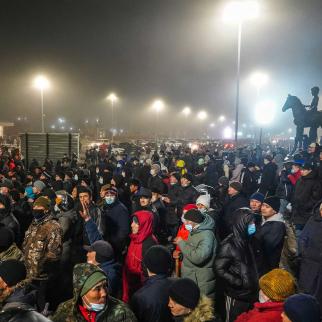 Experts predict further prosecutions and tightened censorship in the wake of unrest.

Zakhro Khakimova has lived in Khodzhai Alo all her life. She grew up, studied, worked and was married in the village, in Tajikistan’s northern district of Isfara, right by the border with Kyrgyzstan. More recently, she was also widowed there.

Her husband, Bakhrom Khakimov, a teacher at a local school, was killed on September 14 during an outbreak of violence between Tajik and Kyrgyz forces along the long-disputed border between the two Central Asia nations.

“When the shooting started, Bakhrom took the pupils to a safe place, and went toward the Kyrgyz frontier guards trying to tell them not to open fire on the children. But someone from there took a shot and killed him,” she told IWPR, recalling how he taught wrestling to children in a rural gym in his free time.

She cannot come to terms with his husband’s death. As a nurse Khakimova used to give injections and intravenous infusions to both Tajik and Kyrgyz from the other side of the border. Sometimes, she visited her patients with serious diseases at home.

“We were good neighbours; there were no quarrels or conflicts between ordinary people. When my Kyrgyz acquaintances learned that Bakhrom had died…they messaged me, sent condolences,” Khakimova said.

The fighting is over, but villagers still live in fear.

“Both Tajik and Kyrgyz mothers are tired of war,” echoed her mother-in-law.

Since the two countries gained independence in 1991, a long section of the Tajik-Kyrgyz border has remained unmarked. The authorities have agreed on only about 600 out of 972 kilometres of their common border. The complex geography, a legacy of the Soviet Union, has fuelled disputes over water, land and pastures.

September’s conflict claimed over 100 lives among both military and civilians and left hundreds of houses, schools, administration buildings and mosques in ruins. Over 136,000 Kyrgyzstanis reportedly had to leave their homes, and just a fraction have returned.

On October 20, Kyrgyzstan asked the Moscow-led security bloc Collective Security Treaty Organisation (CSTO) to deploy peacekeeping troops along the border to ensure the ceasefire held. Entangled in its war against Ukraine, Russia may not have the military capacity and political focus to attend such troubles as it did in January when Kazakstan was embroiled in social unrest and deployed a mission within hours of the president issuing a call.

Authorities in Dushanbe and Bishkek continue to trade accusations over who initiated the September 14-17 violence. The political and ethnic jigsaw has caused regular clashes that have de-escalated quickly; but their frequency and intensity have grown in recent years. In April 2021, for instance, more than 50 people died in fighting that almost led to a full-blown armed conflict.

Kyrgyz and Tajik delegations have held several rounds of talks in recent years but have not yet managed to end the border controversy.

Local residents are angry at this failure to deal with the issues.

Kamildzhon Tuchiev, a farmer in Tajik’s Khodzhai Alo village, said he was “sick and tired”.

“Just above our village, there are 22 Kyrgyz families. We lived peacefully, shared the water from the same dam,” he told IWPR. “Now I wonder what happened to them. So many civilians have died, so many young soldiers, so many houses and households have been destroyed. That’s enough. We don’t need it anymore.”

A few kilometres away, in the village of Zhashtyk in Kyrgyzstan’s Leilek district, Ainura Zhaparova also that people “want to live in peace.”

“When will we stop running away, suffering?” she asked. “It’s high time for the authorities to address the border issues.” Kyrgyzstan, Tajikistan
Conflict
Connect with us