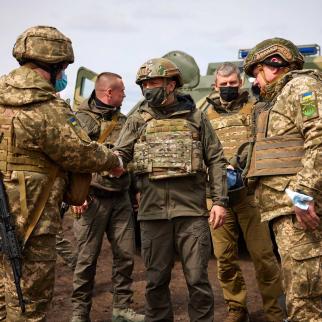 Moscow’s threat of invasion may aim to win concessions, but the momentum for violence continues to build. 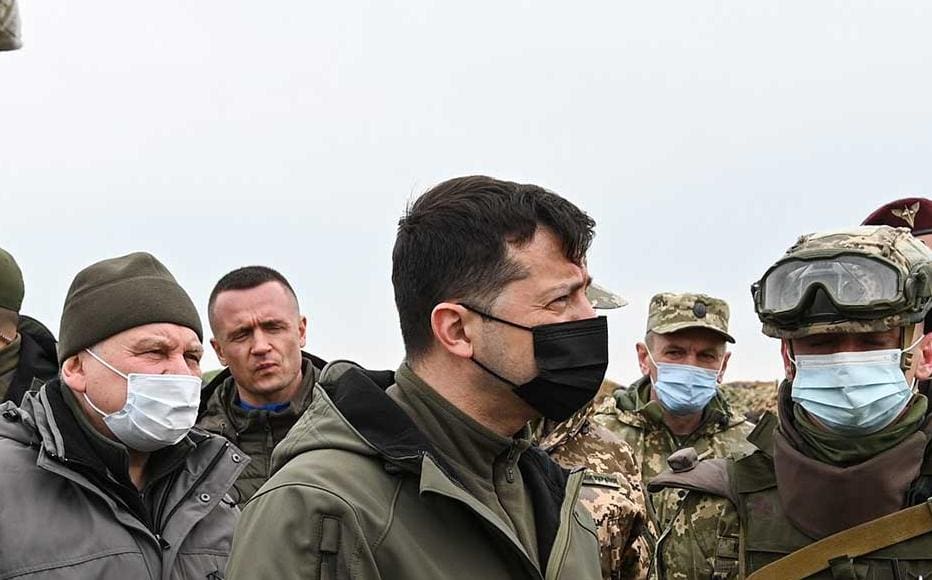 President Volodymyr Zelenskyy visits Ukrainian positions on in the Kherson region, 27 April 2021. © The Presidential Office of Ukraine
The link has been copied

Residents of Ukrainian settlements on the conflict line report no widespread sense of panic amidst the Russian military buildup and local escalation of hostilities.

Recent weeks have seen huge numbers of Russian troops close to the border and in Crimea, which Russia annexed in 2014.

On April 22, Moscow announced it would begin withdrawing its soldiers, but numerous forces and military equipment remains in place.

Sergiy Shapkin, the head of the frontline settlement of Pavlopil near the port city of Mariupol, said that villagers had frequently heard heavy weapons fire in recent weeks.

Ukrainian units are stationed in Pavlopil, as well as one of the four frontline checkpoints in the Donetsk region. But Shapkin said it had been quiet in the village itself since a local ceasefire was agreed in the summer of 2017.

“We also bar the Ukrainian military from firing from the settlement,” Shapkin said.

Heavy weapons fire has also been heard from Mariupol, a city of 500,000 people and the largest in the Donetsk region under governmental control.

In 2014, it became one of the centres of the Russia-inspired separatist uprising in the east of Ukraine. In one incident in January 2015, Grad rockets from territory controlled by the unrecognised Donetsk People's Republic left 31 people dead and more than 100 injured.

Maria Podybailo, the head of the Coordination Centre of Patriotic Forces New Mariupol and one of the key figures of the Ukrainian mobilisation in 2014, said that there had been no major fighting near the city since 2016.

“Mariupol had forgotten the sounds of shelling and blasts,” she said.

But she said that residents had been concerned by news of the Russian buildup in Crimea and the Black Sea. The Azov sea had been effectively blocked by the Russian navy, leaving Mariupol encircled from the east and south.

Podybailo said that there had been growing local interest in joining the civil territorial defence units.

“We act on the premise that… the threat is forever. We should be ready and express readiness,” she said, adding that this not only boosted morale but also sent a clear message to the other side that locals were not intimidated and ready to fight.

The self-proclaimed Donetsk Republic has effectively isolated its population from the rest of Ukraine due to the pandemic. Checkpoints have been closed since March 2020, and last autumn the de-facto authorities began to mobilise local men for military service.

The self-proclaimed government has tested the public alarm system, and various propaganda leaflets have been distributed. Photos of sandbags piled high outside administrative buildings have been circulating on Telegram channels and other social media.

The key message promoted by Russian officials and state media is that locals were preparing to defend themselves against Ukrainian aggression, although Kyiv denies any plans for an offensive.

Podybailo said that she believed that the main purpose of the Russian buildup was to stir panic, but there have been no signs of this in the southern and north-eastern areas that were vulnerable to a possible invasion. There had also been no significant local pro-Russian activity, unlike in 2014 and 2015.

“No matter how numerous pro-Russian residents are - what matters is how numerous we are, what we do and how law enforcement agencies work,” Podybailo said, adding that in Mariupol, pro-Russian feeling “is no different from the majority of other cities everywhere in the country”.

“The general mood is that sabre rattling is what Russia does from time to time, hence nothing special is happening now. The town is just used to the war in the country,” she said.

Yulian Noskov, an engineer working on the port’s strategic development of the port, said that it was functioning as normal, but warned that the escalation might have a longer-term effect.

“If a ship has been already directed to the port, no one would turn it back, I think,” he said. “But it is possible that in the long run, ships will not be sent here.”

Locals in the village of Hromivka in the south of the Kherson region, which borders Russian-annexed Crimea, reported that the only sign of tension had been columns of armed vehicles that sometimes travelled back and forth through the settlement.

Hromivka resident Olena said that her fellow villagers were much more concerned about Covid-19 and the sharp rise in food prices than the Russian military.

“People were scared in 2014,” she continued. “We didn’t know what was coming. The rumours had been spreading about Russian intentions to pave the way from the Azov shore to Crimea and to the water reservoir [which supplies the whole region]. Now there is nothing like this to be heard.

Giving Voice, Driving Change - from the Borderland to the Steppes
Ukraine
Conflict, Army
Connect with us