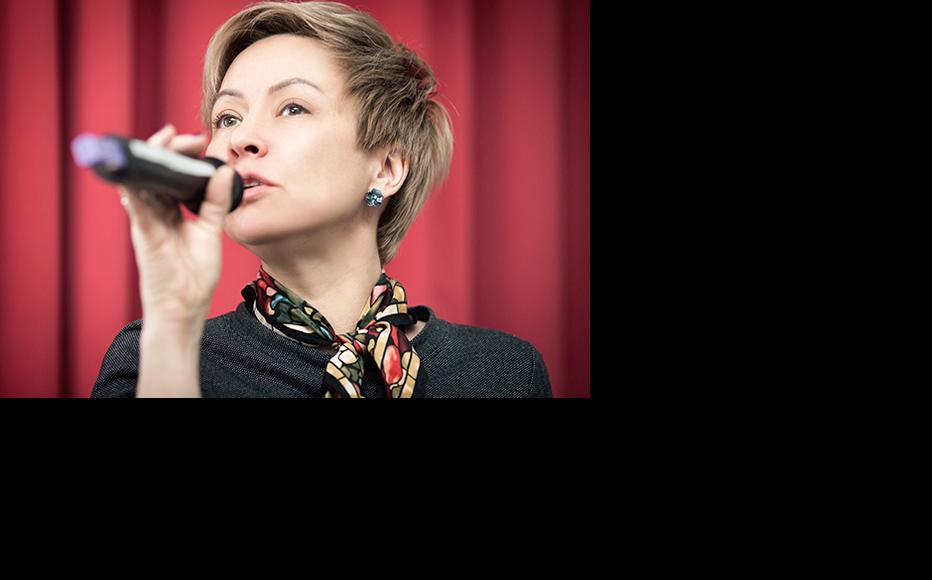 On April 21, Ukraine will hold a presidential run-off between the incumbent Petro Poroshenko and newcomer and former comedian Volodymyr Zelenskiy. IWPR Ukraine project manager Katya Laba explains why voters are likely to abandon the status quo to gamble on a charismatic but inexperienced political unknown.

Q: Why was it Zelensky, do you think, rather than other candidates who managed to capitalise on the wave of anti-establishment populism?

A: The runoff is often a choice between the lesser of two evils. This time Ukrainians get to choose between the stable, predictable incumbent Petro Poroshenko - preserving an oligarchic political establishment along with corruption - and Volodymyr Zelenskiy, a “virtual” candidate” with no political history who promises dreams and long-awaited change. My own fear and uncertainty is focused on the latter. I don’t believe he can manage to realise this dream but instead may bring “old faces,” another grouping of oligarchs and political forces that we can’t even imagine.

So far Zelenskiy has avoided participating in television talk shows or the debate sessions suggested earlier by Poroshenko. I’m also dissatisfied that he avoids interviews with respected and independent journalists. Between the rounds I expected to hear a lot from Zelenskiy live, not from pre-arranged clips or his people talking on his behalf. How does he see the solution for occupied Donbas and annexed Crimea? What are the plans for working with the International Monetary Fund, NATO and EU? What are his solutions to ensure economic growth? And there are many more questions.

The contenders at last managed to agree on holding a debate on the evening of April 19, however this will not be in the studio of the public broadcaster but in the huge Olympic stadium full of people. I’m afraid this might be more of an entertainment show than a serious talk. My fear is also that if there are any sensational statements from the candidates, especially from Zelenskiy, there will be no further research, discussion or refutation of them as the next day there is no campaigning. With a lack of specific information every voter paints his own portrait of Zelenskiy.

What are the electorate’s priorities as the country goes into the second round of elections?

According to the polls, Zelenskiy has 48.4 per cent among those who plan to vote, while Poroshenko has 25 per cent. Almost 28 per cent have not yet decided. Research shows that the lion’s share of Zelenskiy’s supporters, some 72 per cent, are not so much his supporters as adversaries of Poroshenko, and therefore don’t much care what Zelenskiy does now. This is protest voting against Poroshenko.

This may be bad news for Zelenskiy as he may disappoint his supporters. According to other research on what people expect during the first 100 days of the new president, 40 per cent of voters want him to decrease tariffs for housing utilities, over 30 per cent want to cancel immunity of the government and parliament and imprison corrupt officials, and another quarter want negotiations with Russia. Most of these issues are beyond the president’s authority.

From where do the candidates draw their voter bases? And where will the president need to seek support to be able to enact any major change or exert any serious power?

Zelenskiy consolidates all the opponents of the current government, so he has quite a mixed audience of different views and ages. In the first round, his base were voters of the south and centre of Ukraine – 35 and 34 per cent respectively. Western Ukraine gave him gave him 18.5 per cent and the eats, 12 per cent. Zelenskiy was described as the candidate of the youth and large cities but more than half of his supporters live in the provinces in small towns and villages. Regarding age, the core groups were 18-29 year olds, which made up 24.6 per cent of his support, 30-39 year olds at 28 per cent and 40-49 year olds at 21 per cent. Most are quite educated people: 46 per cent have gone through higher education.

Zelenskiy campaigned in a modern style using Instagram and social media, having become popular playing a fictional president fighting an oligarch-driven political system in the TV series The Servant of the People, launched in late 2015. However, his agenda is not classically populist, but responds to Ukrainians’ key demands to fight graft and economic problems, while Poroshenko’s campaign slogan “Army. Language. Faith” sounds less relevant given the background of financial hardship and corruption scandals.

Zelensky is the current favourite, but is someone so politically inexperienced prepared to hold office? What are his major vulnerabilities?

There are lots of questions about his capabilities. He is not experienced in public management, politics, economics or diplomacy. Therefore, who the members of his team and future appointments are becomes even more significant. Just a couple of days before voting this remains quite vague.

I can imagine him succeeding only if he is open enough to engage reform-minded groups, experts and activists into policy making and governance.

Even ex-US ambassador John Herbst hinted that Zelenskiy’s links with oligarch Ihor Kolomoiskyi, if confirmed, contradict his anticorruption rhetoric and will undermine his ambitions. Although both have said that that their relationship is purely commercial regarding television products – Kolomoiskyi owns the TV channel where Zelenskiy appeared - journalists have shown that Zelenskiy uses all the oligarch’s media resources, as well as his lawyers, consultants, bodyguards and cars.

What kind of coalition agreements and behind the scenes negotiations do you think are ongoing ahead of the run-off?

In order to pursue his plans the president needs enough support in the parliament. Of course, there is no pro-Zelenskiy parliamentary group. There have been no reports that his team is negotiating in parliament. Instead, there is speculation whether the new president will be able to legally dismiss the parliament and how advantageous it may be to do so as parliamentary elections are in autumn 2019.

What will be the immediate challenges and pressures on the incoming president, whoever succeeds?

The first and foremost challenge for the next president is Russian aggression: how to deal with Putin, how to maintain international support for Ukraine and what can be the strategy for the occupied territories. The second is economics: how to foster economic growth, whether to keep up with the IMF, and countering corruption. The corruption issue is about public money as well as increasing investments and doing business within Ukraine - but also about justice reform, property safeguards and the effectiveness of law-enforcement bodies.

Do the other candidates’ defeat in the first round signal the end of their political careers?

We had a record number of 39 presidential candidates, although most of them served simply to draw attention or increase the number of loyal representatives in the electoral commissions. The presidential race was a good opportunity to advertise the “face” of certain party, and also test what support they may expect. There were also a few totally new faces who entered politics. A dozen more were real politicians who have aspirations for the 2019 parliamentary and 2020 local elections.

Despite the apparent success of populism, what does the election process so far say about the state of democracy in Ukraine?

The first round of the elections was democratic, fair and competitive, as recognised by respectable observers and diplomatic missions. There were only some minor violations. The media was diverse and free in its coverage, but each outlet showed its own bias, divided by political preferences and their owners’ interests. Having free elections and a free media, elections in which each Ukrainian’s vote matters – the current president and the government has to get credit for this achievement. I do not expect any administrative pressure during the runoff, even if Poroshenko loses.

Giving Voice, Driving Change - from the Borderland to the Steppes
Ukraine
Elections
Connect with us