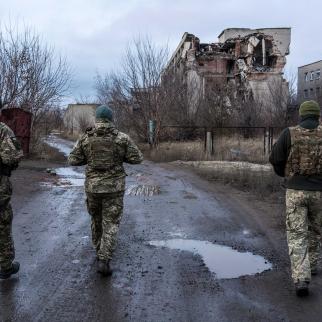 Ukrainian soldiers walk past destroyed buildings on the front line on December 8, 2021 in Marinka, Ukraine. A build-up of Russian troops along the border with Ukraine has heightened worries that Russia intends to invade the Donbas region. © Brendan Hoffman/Getty Images

“Where could we flee? We have nothing to lose.” 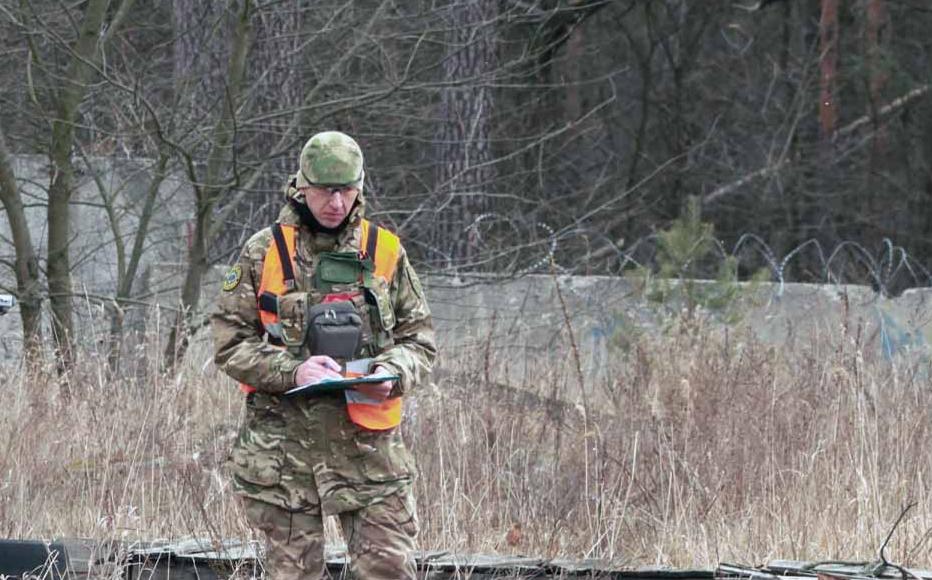 As tensions continue to mount with Russia, Ukraine is mobilising a citizen militia that Kyiv hopes could be instrumental in resisting an invasion.

Thousands of volunteers flocked to join military efforts when war first broke out in 2014, but this new force is intended to be well-structured and better equipped, with the ability to be deployed rapidly across the country.

"The territorial defence is becoming a fully-fledged part of the Ukrainian army," said Fedor Venislavsky, a lawmaker from the ruling Servant of the People party and a member of the parliamentary committee on national defence, security and intelligence.

The national resistance act, which came into force on January 1, 2022, mandates that in addition to the core 10,000 career personnel currently in territorial defence, a further 120,000 civilian reservists will be recruited and trained. In the event of any mobilisation, they will have to report to their units within 24 hours, swelling the ranks of the territorial defence forces to 130,000.

Officials say that this ambitious recruitment effort is expected to be complete by the end of February. The commander of the new force, Yuri Galushkin, said that the existence of a mass volunteer militia could even be the decisive factor in discouraging Russia from invasion.

"The situation may be such that it is the territorial defence forces that will be the first to start hostilities, if the main forces are still at the stage of mobilisation or have not yet arrived in the area of operation,” he told Armyinform in an interview. “We will not watch how enemy columns cross the border and move through our territory…Perhaps this will be able to stop the enemy's intentions to move to open aggression.”

Russian troops have been massing on the Ukrainian border since November 2021, and many fear that a full-scale invasion is highly likely.

Venislavsky explained that in this eventuality, the territorial defence fighters would be deployed to ensure calm in the rear, enabling the 250,000-strong army to perform their frontline duties.

"This is not only the protection of authorities, but also critical infrastructure facilities, such as bridges or power plants, and their functions include countering sabotage squads,” Venislavsky said. “However, there is another change – the territorial defence moves from the office of the head of the ground forces to the commander-in-chief. And this means that, if necessary, these fighters can be sent to the front line, if the commander-in-chief decides that the time has come.”

The weapons available to volunteers – until now limited to small arms such as assault rifles and pistols for officers – will also be upgraded.

"Of course, we are not talking about heavy armoured vehicles, but in connection with the expansion of tasks they will receive both grenade launchers and mortar artillery," Venislavsky explained, adding that Canada recently announced it would supply small arms and protective equipment to the Ukrainian territorial defence.

This will make it possible to provide volunteers with modern equipment in addition to the current, often Soviet-era, supplies.

"We have already formed 70 per cent - and in the border regions 100 per cent - of the personnel basis of the territorial defence and are beginning to receive reservists,” Venislavsky said. “In general, by the end of February - and in the border areas to the Russian Federation much earlier, most likely by mid-February - this work will be completed.”

Territorial defence officer Oleksiy Lapin said that the new system could be a game-changer.

"Until now, it was a lot of platoons which were united only by a common name,” he said. “Now it is a full-fledged military structure with its own hierarchy and control system."

However, Lapin - also deputy head of the Ukrainian Legion, a body which organises military training for the civilian population – warned that the core forces were far from combat ready.

He said that it was indicative of the system’s lack of organisation that, although he joined the staff of the territorial defence forces when they were created in 2015, it took two years for him to be assigned a proper role. There was a similar lack of clarity as to how participants were trained, Lapin continued.

"It all depends on the platoon leader,” he said. “If he is proactive, then regular classes and exercises are held, and if not, then everything is limited to going to the shooting range once a year.”

Territorial defence reservist Irina Martynyuk - whose full-time job is as an assistant to a deputy of the Kiev City Council – joined the service in 2019, having decided that she wasn’t physically robust enough to become a full-time soldier.

"I have been helping the army since 2014, first as a volunteer – we visited wounded Ukrainian soldiers in hospital, helped with medicines, then we began to make transfers to soldiers to the front – from uniforms to drones,” she said. “But at some point I realized that I could do more for my country.”

Martynyuk expects training to be ramped up, given the new law and the growing threat.

"Now we have only two career soldiers in the platoon, now there will be more of them. It is not yet clear how this will affect the classes, but we expect that there will be changes," she said, adding, “Now we have tactical exercises once a week, about once a month a trip to the shooting range, and once a year a full-fledged visit to the training ground.”

Lapin said that recruitment and training needed to be streamlined if the authorities hoped to recruit and train sufficient numbers of volunteers in the coming weeks.

"There is already an understanding that the current procedure in the military recruitment office is too bureaucratic and does not suit many volunteers, which means that it needs to be changed,” said Lapin. “There is also an understanding that people who have a full-time job cannot attend all classes, which means that it is necessary to constantly duplicate them. Another problem is the length of classes. Military practice requires them to take at least five days. For workers, this is impossible, so we need to prove that three or even two days will be enough.