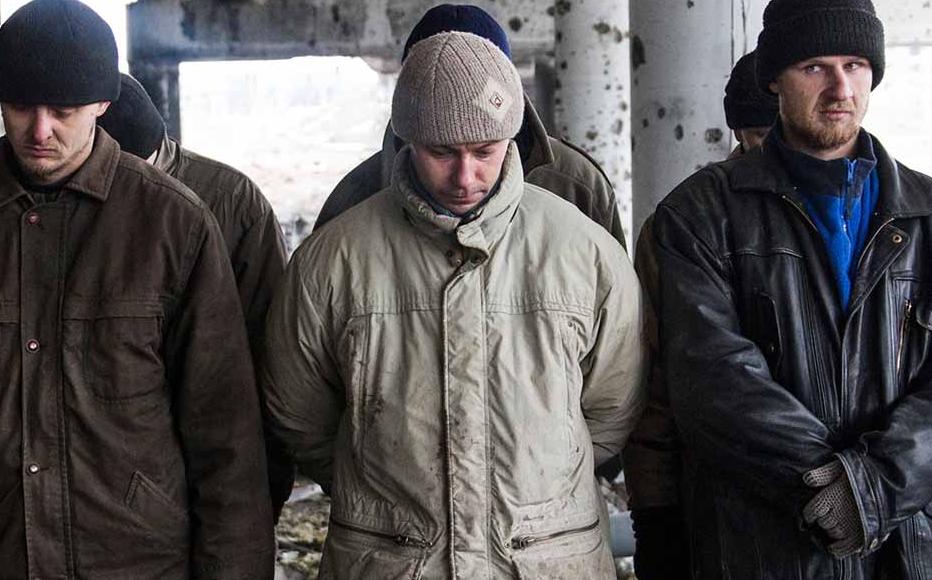 Ukrainian soldiers, prisoners-of-war are lined up before being forced by pro-Russian rebels to search through the wreckage of the destroyed Donetsk airport for weaponry and dead bodies on February 26, 2015 in Donetsk, Ukraine. © Andrew Burton/Getty Images
Interview

As evidence grows of the cruel treatment and extrajudicial execution of Ukrainian captives, legal and human rights bodies are building strategies for prosecution.

Ukrainian soldiers, prisoners-of-war are lined up before being forced by pro-Russian rebels to search through the wreckage of the destroyed Donetsk airport for weaponry and dead bodies on February 26, 2015 in Donetsk, Ukraine. © Andrew Burton/Getty Images
The link has been copied 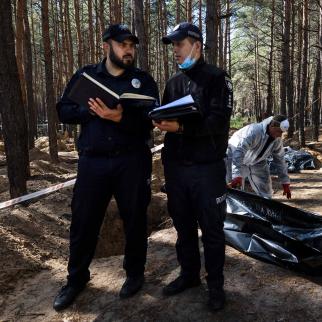 Forensics experts exhume bodies from unidentified makeshift graves at the Pishanske cemetery on September 21, 2022 in Izium, Ukraine. The bodies will be examined by forensic officials for possible war crimes. Izium was recently liberated from Russian occupation after six months. Approximately 440 bodies are buried at the cemetery, so far over 338 bodies have been exhumed, taken to the morgue in Kharkiv. © Paula Bronstein/Getty Images

Ukraine: Why a Special Tribunal is Crucial

The world has to show that responsibility for the crime of aggression is real, and not just theoretically provided for by the norms of international law.

Russia recently returned more than 200 prisoners of war (POW) - including ten foreign citizens and some former defenders of the Azovstal steel plant - from captivity. Many had signs of torture and inhumane treatment and needed urgent medical help.

Yury Usmanov, an expert at the Regional Centre for Human Rights, told IWPR's Svitlana Morenets that Russia as a state, as well as specific individuals, could be held accountable for committing war crimes against Ukrainian POWs.

IWPR: In what condition did Ukrainian soldiers return from Russian captivity?

Ukrainian prisoners of war were returned to us with signs of extreme anorexia, concussion, hidden fractures and exacerbations of various degrees of chronic diseases. These are clear signs of torture and abuse. For example, Mykhailo Dianov spent four months in Russian captivity with a broken arm, four centimetres of bone are missing. Now he needs several surgeries and a long period of rehabilitation.

Despite the lack of access to the places where the Russian Federation holds Ukrainian POWs, our law enforcement agencies and international organisations, in particular the office of the UN high commissioner for human rights, note in their reports numerous extrajudicial executions by the Russian armed forces of Ukrainian POWs, torture and cruel treatment, even including denial of medical care.

The recent shelling by the Russian armed forces of our POWs in Olenivka further confirms how the Russian Federation is trying to hide its crimes against POWs. The incident's exact number of victims is still unknown. The Russian media themselves speak of about 53 Ukrainian servicemen, but we have yet to find out the real number of POW and civilian casualties. What norms of international humanitarian law have been violated?

Such actions by the Russian Federation violate the norms of the Third Geneva Convention relative to the treatment of prisoners of war, 1949. Article 13 of the Convention clearly states that ‘any unlawful act or omission by the Detaining Power causing death or seriously endangering the health of a prisoner of war in its custody is prohibited, and will be regarded as a serious breach of the present Convention’.

The Rome Statute of the International Criminal Court (ICC) in paragraph two of article eight defines torture as a war crime. Moreover, the prohibition of torture is a peremptory norm of international law with no exceptions and is mandatory for all states worldwide. The Russian Federation must comply with international humanitarian law and bring to justice those individuals who have committed war crimes.

Does Ukrainian law allow prosecution for the cruel treatment of prisoners of war?

The public sector, including the Regional Centre for Human Rights, helps them with explanations and advice. Thus, we help our law enforcement agencies to bring all guilty persons, including the military of the Russian Federation, to individual criminal responsibility under the Ukrainian criminal code.

According to article 438 of the criminal code, the person can receive between eight and 12 years imprisonment for the cruel treatment of prisoners of war. In case of murder, the severity of the punishment increases - from ten to 15 years or even life imprisonment.

What are the limits of the Ukrainian criminal code?

The Ukrainian court cannot prosecute Russian ministers and the president because they have immunity. But such immunities do not work at all in the ICC. All persons who have committed the crime of aggression, war crimes, crimes against humanity and the crime of genocide on the territory of a state that has recognised the jurisdiction of the ICC can be prosecuted.

Ukraine has recognised the jurisdiction of the ICC in The Hague for crimes committed on the territory of the country after February 20, 2014. The ICC has jurisdiction over violations of laws and customs of war regardless of the nationality of the perpetrators, even if they are citizens of third states.

Unfortunately, the ICC can't prosecute such individuals in absentia. According to procedure, they must appear in court. But the ICC can issue a warrant for the arrest of such individuals - they will be limited from leaving, for example, the Russian Federation because they will be immediately arrested. Unfortunately, this will not prevent them from travelling to countries not members of the Rome Statute of the ICC.

Ukraine demands the establishment of a Special International Tribunal to hold the Russian military and political leadership accountable for the crimes of aggression they commit on Ukraine's territory. It is now being actively discussed.

What responsibility will Russia have as a state?

As a state, the Russian Federation will have international public responsibility, which may primarily consist of the obligation to return stolen property from the territory of Ukraine, compensate the state for damages, and give compensation to Ukrainian citizens and their families affected by the aggression of the Russian Federation.