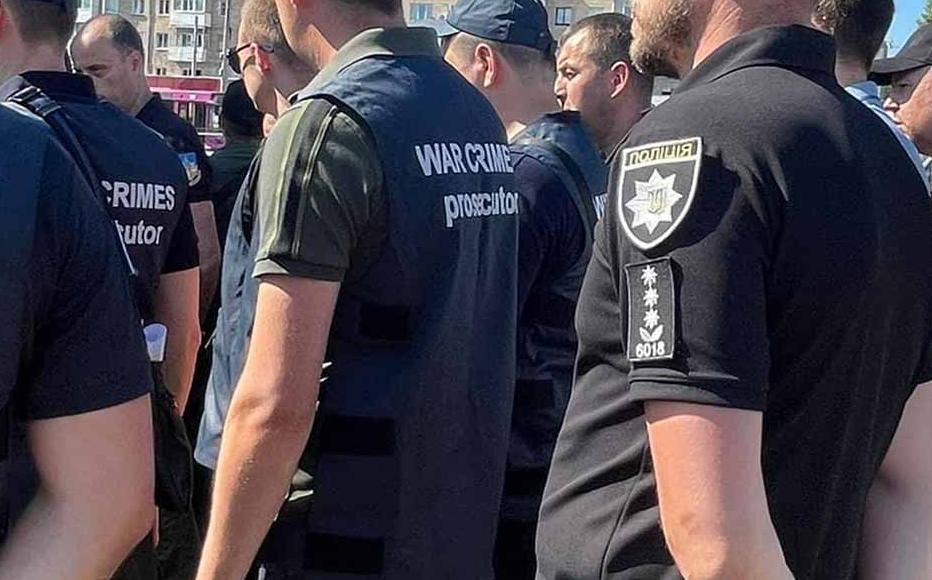 Members of Ukraine's war crimes prosecutor team. © Office of the Prosecutor General of Ukraine
The link has been copied

The first case of alleged wartime rape by a Russian soldier is to be heard in absentia by a Kyiv court.

Mykhailo Romanov was summoned to appear at a December 16 session of the Solomyansky district court where he is accused of serious crimes under Art 438 of the criminal code of Ukraine concerning the violation of the laws and customs of war.

According to the investigation, during the Russian occupation of a village near Kyiv in May, Romanov raped a local woman on three occasions, having first killed her husband. He is accused of acts of armed aggression in the village of Bohdanivka in the Brovar district of Kyiv region. The occupation of this village lasted around a month and was remembered by local residents for the Russians' particular cruelty. Other criminal cases are ongoing in which Bohdanivka residents have testified about incidents of murder, torture and rape.

Russian tanks entered Bohdanivka in early March. According to the investigation, on the evening of March 9 Romanov, together with other Russian military personnel, broke into a house where a young family lived. He killed the 37-year-old owner with one shot from a pistol. The deceased was a civilian, had not taken part in an armed conflict, had no weapons and posed no threat to Russian servicemen. He died on the spot and his killers allegedly stole his wedding ring.

As stated in the case materials, at that time the accused and his accomplice, whose identity was not established during the pre-trial investigation, “had an intention to commit acts of a sexual nature related to natural and unnatural penetration into the body of the victim [the deceased’s wife] with the use of genitals, without the victim's voluntary consent”.

Having made sure that the victim's husband was dead, Romanov and an accomplice threatened the 34-year-old woman at gunpoint and forced her to undress. They also threatened her three-year old son, who was nearby, with violence if she did not do as they said.

Both Russian soldiers were drunk and proceeded to rape the woman, after which they left the house. An hour later, the two Russians returned and assaulted the woman again. After 40 minutes, they came back again and raped her for the third time.

“Russian soldiers raped me as my terrified son cried,” the woman told The Times newspaper in an interview. She added that Russian soldier put a gun to her head and said, “I shot your husband because he is a Nazi.”

After the ordeal, the woman and her son fled the village, after which she reported the incident.

Russian soldiers subsequently burned down the family's two-storey home and locals later buried the murdered owner in the yard, placing a cross on the grave.

In a video released by the head of the main department of the Kyiv region National Police, Andrii Nebytov, it can be seen that the exhumed corpse of a man had his hands tied with a rope.

“The man tried to defend [his wife] but they shot him,” Nebitov said.

The Russians also shot the couple's dog and its body was found in the yard of the ruined house, next to a burnt Christmas tree, a car and toys belonging to the three-year-old boy.

In mid-March, information about Romanov’s alleged death in fighting was published on social networks and a photo of his corpse was reportedly sent to his wife.

However, the press service of the Kyiv region prosecutor's office told IWPR that they currently had no information as to his death.

The suspicion against Romanov was announced in absentia, an indictment was subsequently sent to the court, and in accordance with procedure, the accused was summoned.

If convicted and determined to be alive, he will be put on an international wanted list and will face between ten and 15 years in prison or life imprisonment.

As the case concerns a sexual crime, it will be considered in a closed court without the participation of the press in order to ensure the anonymity of the victim.

Romanov was appointed a lawyer from the Ukrainian Centre for Free Legal Aid. In June, at the beginning of the preparatory session, this lawyer supported the prosecutor's request to hold the trial in closed session.