Ukraine: A Day in the Life of a Journalist on the Frontline

“As soon as we leave, a Russian shell lands exactly where we had been. If we’d left 30 seconds later, I would not be here to write this.”

Ukraine: A Day in the Life of a Journalist on the Frontline

“As soon as we leave, a Russian shell lands exactly where we had been. If we’d left 30 seconds later, I would not be here to write this.” 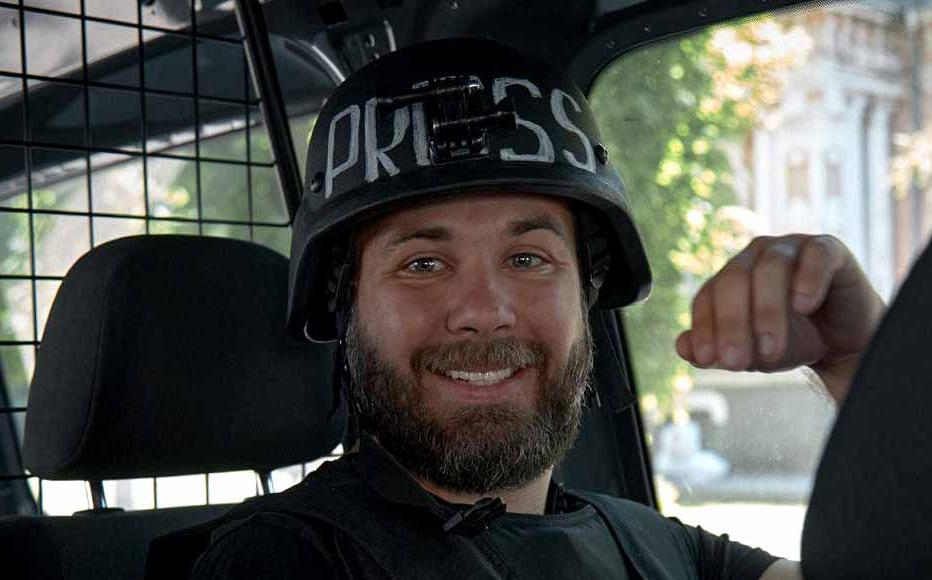 Yevhen Nazarenko, 33, is a military reporter for the Ukrainian Witness YouTube project of the Come Back Alive Foundation, one of the country’s largest charitable funds. He has worked for Ukraine’s largest outlets, including 1+1, ICTV, Channel 24.
The link has been copied

I began working as a war correspondent in 2015. Since then I have been making continuous work trips to Donbas. I have been under fire, seen soldiers and civilians die. It has been scary, but also fun sometimes – because in war everyone laughs so as not to lose their minds.

On February 24, I was in Kramatorsk, in Donbas. Like most people, I didn't believe a large war was about to begin. But at 5 m, Russian Smerch BM-30 multiple rocket launcher systems flew into the city. No one expected it, as Kramatorsk has always been peaceful, away from the front. As the windows shuddered, I turned the news on and realised that the Russians were coming from all sides.

That's how the real war began for me, as what was happening before February 24 no longer seems like war.

No one knew where the fighting would go, so we decided to flee Donbas and return to Kyiv. But the war followed us the whole way: a month of shooting and shelling in Kyiv. When the Russians were driven out of Kyiv region, I realised I would have to follow the war. It is my job. So I went back to Donbas, again. But it was like going there for the first time.

We are based in Kostiantynivka, a city that is more or less calm, although a week before we arrived a Russian missile destroyed a local school. Security in Ukraine is a relative concept. Missiles can land anywhere.

Morning routine for war correspondents does not start with coffee. We check bulletproof vests, helmets and first aid kits. Camera batteries are charged, everything works. Only then is it time for a quick coffee – and we are ready to go to the outskirts of Bakhmut, as agreed. The journey takes about half an hour, but roadblocks slow us down. Before, there weren’t any between the two cities; now, there are four.

The conversations with the soldiers never change.

“Where are you going?”
“Bakhmut.”
“Careful there, guys, it was fired on half an hour ago.”
“Understand, but that's the job.”

We drive into the city. Everything is calm for now.

Meeting the military in Bakhmut. We can hear the sounds of Russian shells exploding somewhere far away. As long as we are not the target, it is okay. We leave our driver in a relatively safe place, and together with the army drive in two cars to the village of Pokrovske, the frontline.

I know these roads by heart, all the turns and intersections, the difference being that Pokrovske used to be far from the front. Since our troops withdrew from Svitlodarsk, near to Bakhmut, we don’t know whether the roads will lead to Russians or to mines. We definitely do not want to be captured - as Ukrainian correspondents will be immediately named as propagandists. Nor do we want to get blown up. So we stick close to the military, who know all the roads here.

At the entrance to Pokrovske, a Russian helicopter appears in the sky and fires missiles at Ukrainian army positions – exactly where we're heading for. The soldier accompanying us orders us to stop and hide the car among the bushes and trees. We wait for 15 minutes as the Russian chopper shoots at the army’s positions and the village. You can see the trail from the ground-to-ground missiles above, the helicopter missiles. It's such a strange feeling because I've never seen Russian aviation in action here in Donbas. I’ve been under attack from artillery, Grad missiles, and tanks, but this is the first time being shot at from the sky. The helicopter shot back and it became quieter.

“It is done, but there are four of them working here together, so I doubt it's fully ‘done,’” he replies.

At our own risk, we advance when we can no longer see Russian helicopters in the sky. In Pokrovske, as Russian drones constantly fly in the sky to direct artillery fire, we hide the car under the trees. We can see the ruined houses of local people who are afraid to leave their yards.

The Ukrainian military shows us the remains of a local school: the day before our trip, it was destroyed by a bomb dropped by a Russian aircraft. You can see it was a school by the remnants of desks and boards in the classrooms.

Under the sounds of Russian artillery, we decide to record an interview with the military. In the middle of the conversation, an artillery shell lands nearby.

“Close to our car,” says a soldier with the call sign Bayda (Patriot).

The military insists on leaving as soon as possible.

We get into the cab of a military pickup truck, while two soldiers get into the back. As soon as we leave, a Russian artillery shell lands in the exact place where the car had been. If we had left 30 seconds later, I would not be here to write this diary.

We return to the military base in Bakhmut. We are talking about life, writing an interview – when suddenly we hear the whistle of a falling shell very close by. This wasn't on the frontline, it was in relatively peaceful Bakhmut. The military direct us into the basement. But there's a problem: I can't see the driver we left in town. I call him but he’s out of range. I try to contact him on Messenger, no answer.

“My driver has disappeared,” I tell the soldiers. “He’s not answering.”
“May he rest in peace,” a soldier with the call sign Viking jokes, darkly.

As we sit in the basement, another five or six shells land. I'm recording another interview, but I can’t stop thinking, “Where's the driver? What happened to him?”

He calls as soon as the shelling ended. He’s ok, but a shell exploded next to him. We jump into the car and leave Bakhmut as quickly as we can. After an hour, we are sitting in relatively peaceful Kostiantynivka, laughing at what happened. Maybe it's a nervous thing or some form of self-defence, but the fact that we were almost killed makes us cheerful. It's not at all funny at the time, I know. But it will be later.

Tonight, we’ll eat a simple dinner from whatever we can find in Kostiantynivka's stores – not much – and edit our material. Tomorrow, we’ll return to the shooting. Back to the danger, to our military.

This was a normal day in the war. Not an escalation, not an assault. Just a day in and around Bakhmut.

Yevhen Nazarenko, 33, is a military reporter for the Ukrainian Witness YouTube project of the Come Back Alive Foundation, one of the country’s largest charitable funds. He has worked for Ukraine’s best-known broadcasters, including 1+1, ICTV and Channel 24.