New legislation would expand the range of non-custodial available to courts. 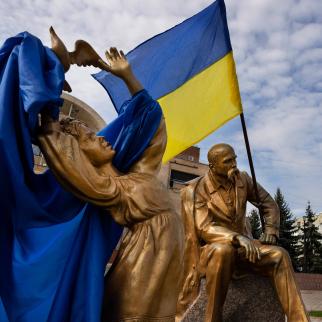 Ukrainian flags are displayed in the town square on September 29, 2022 in Balakiya, Ukraine. Balakiya was under Russian occupation for six months, the mayor collaborated with Russians, sparing the city from major destruction. © Paula Bronstein /Getty Images

“Justice is Costly, but Also Priceless.”

New legislation would expand the range of non-custodial available to courts. Olena Vysotska, Ukraine's deputy minister of justice. © Courtesy of O. Vysotska
The link has been copied

Despite the ongoing conflict, justice officials are working on far-reaching way to reduce the burden on the country’s prisons and revise the probation system. The government approved a draft law on September 19, 2022 which has now passed to the relevant committee. Deputy minister of justice Olena Vysotska told IWPR’s Tetiana Kurmanova that the aim was to facilitate social integration while ensuring offenders paid for their crimes.

IWPR: Why is the ministry of justice reviewing alternatives to imprisonment?

Olena Vysotska: Currently, the justice system in Ukraine centres on isolating offenders in order to make it physically impossible for them to commit a crime again during a certain period of time. But prison should not be required for every offence. It is important for us as a society that offenders do not commit crimes again after their time in jail. Our philosophy is that only those people who have committed a serious crime should be in prison. There must be a punishment, the question is only in what type of punishment. A person should not just serve a sentence, but change, and learn to live without breaking the law.

The bill foresees options like community service, fines… electronic bracelets, and certain restrictions on professional activity. Minor crimes can be paid off with time in the community to, for example, compensate the victim for damages.

What problems will this initiative solve?

Alternative sanctions could help solve existing problems in the penitentiary system, starting from the costs to maintain each prisoner. It is expensive and yet, living standards remain low. Unburdening the system would allow us to use resources more efficiently and focus only on those people who really deserve to be imprisoned.

Life in prison affects people’s behaviour; it is difficult to talk about psychological assistance or re-socialisation programmes.

What are the current costs per prisoner?

We always provide information for the previous year, when the period ends. In 2020, keeping one person in jail for a year coss 130,000 hryvnias (3,523 US dollars). Nearly half of the amount would go on utilities and personnel, and the rest in medical care, food and other material support. This is approximately 11,000 hryvnias per person per month [about the average salary in Ukraine]. These are huge expenses.

It is possible that trimming sentences and the number of prisons will proportionally reduce the impact on the state budget. We also must redirect these savings to modify current detention conditions that are not conducive to true correction and re-socialisation. You cannot teach a person to study and read books in the conditions of the current detention system.

Probation is one of the proposed options. What this would involve?

Probation is not something new for Ukraine. We have about 60,000 people on probation, twice as many as in prisons. It has been in place for five years, with about 3,500 staff around the country. All alternative punishments to imprisonment are accompanied by probation inspectors. These include community service, payment of a fine, restrictions on professional activity and a ban on holding certain positions.

Probation deals with this. This is not an avoidance of criminal responsibility, as it is somehow believed in our country. We see that currently in prisons there are about 2,000 people who could join the programme of the 60,000 I have mentioned. It is a number that will not fundamentally affect the work of probation.

Currently, we have ten correctional centres. These are open institutions for people convicted of criminal misdemeanors and minor crimes and prisoners to whom this type of punishment is assigned as a replacement for an unserved part of their sentence.

What will the new legislative initiative change?

Fundamentally, it will extend the list of articles and crimes and when the court can apply this type of punishment.

Currently, it is difficult to predict the future burden on the probation system [because of the war]. This will not mean that the court is obliged to implement it as it has the right to choose. I believe that judicial practices will move towards this quite slowly. But as a society, we have to give such an opportunity to the court.

Do you have proposals to address cases in which offenders lack the funds to pay their bail?

The draft law contains many innovations related to the release on bail, like the use of collateral, for example properties, or instalments to allow more people to benefit. And the court can use it more because it will help to unload our system.

People can mortgage an apartment while proving their innocence in court or pay the bail in instalments: if they get sentenced, the payments stop. There is a limit on the time of the trial in court so that we do not see endless processes when a person can spend a longer period of time in investigative isolation than assigned.

We have to motivate the Verkhovna Rada (parliament) to adopt these laws, and then the courts and the legal community to enforce them.

Probation must develop, gain momentum, and prove that the institution is capable of carrying out criminal punishment. Society must trust it, and know that recidivism is decreased after probation.  We are not talking about opening prisons’ doors… Every crime must be punished. But prison is not the only way to punish offenders