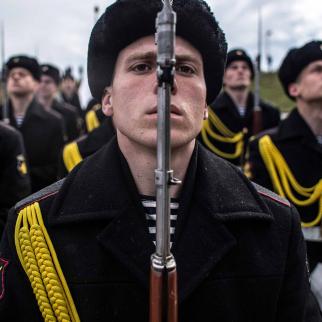 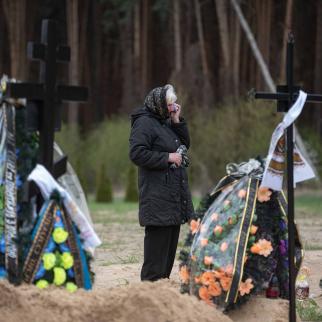 A woman cries as she stands by a fresh grave, on May 1, 2022 in Irpin, Ukraine. The practice of visiting relatives' graves the week after orthodox Easter, a tradition referred to as Hrobki or Provody, held added poignancy as the country mourns the civilians and soldiers lost to the war with Russia. © Alexey Furman/Getty Images 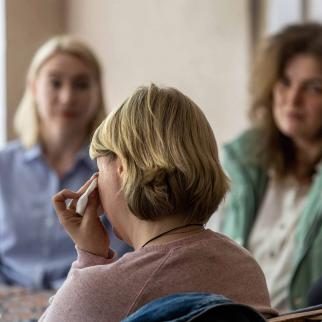 A woman displaced by war wipes tears during a counselling session as psychologists listen on May 03, 2022 in Kryvyi Rih, Ukraine. © John Moore/Getty Images

Ukrainian officials warned that the designation by the Russian Supreme Court, on August 2, of the Azov Regiment as a ‘terrorist’ organisation aims to deny detainees due protection under the Geneva Convention. The ruling was announced days after the deaths of 53 prisoners at Olenivka in Donetsk.

‘Any internal decisions of this nature by the captive state do not affect the status of prisoners of war’, noted Anton Korynevych, ambassador-at-large at Ukraine’s Ministry of Foreign Affairs, on Facebook. ‘The Russian Federation is obliged to fully apply the provisions of international humanitarian law in relation to [Azov fighters]’.

American officials have alleged that Russia is fabricating evidence to blame Ukraine for the deaths. The UN has announced a fact-finding mission into the explosion, while France has sent a mobile DNA lab to assist in war crimes investigations. Relatives of Mariupol defenders held a demonstration in Kyiv on August 4, and other demonstrations were held across Europe.

Following the deaths, on July 29, of 53 Ukrainian prisoners of war at Olenivka, in Donetsk, the International Committee of the Red Cross (ICRC) has underlined the limits to its role in protecting prisoners of war (PoWs). In a statement on August 3, the ICRC said, ‘We did not guarantee the safety of the PoWs once in enemy hands because it is not within our power to do so.’

Under the Third Geneva Convention, the ICRC has the right to inspect facilities and speak to PoWs, and visited Olenivka twice in May. But it does not testify at trials. ‘We actively work to promote adherence to and respect for international humanitarian law (IHL) by the parties to the conflict, including through holding bilateral and confidential dialogue with them,’ it said.

Since February 24, Ukraine has opened 1,451 criminal proceedings for crimes against children, according to Deputy Prosecutor General Ihor Mustetsa, at a press briefing on August 1. This includes 668 cases for death, injury and sexual violence against children, 671 for attacks on children’s institutions and 112 for forceful relocation.

The state portal Children of War has been established to help law enforcement agencies collect information about children suffering from the war, including missing or deported to Russia. ‘I would like to urge everyone, [including] people who became victims or eye witnesses of war crimes, do not be afraid of sharing this information with law enforcement agencies,’ Mustetsa said.

The prosecutor’s platform for collecting evidence is War Crimes. In an August 3 Telegram post, the office reported a total of 26,465 ‘registered crimes of aggression and war crimes’.

In an extended Facebook post, Oksana Pokalchuk announced her resignation as head of the Ukraine office of Amnesty International (AI), following the organisation’s press release on August 4 about the its latest research. The AI report, based on field research, accuses the Ukraine military of endangering civilians by locating forces in residential areas. ‘International humanitarian law requires that all parties to a conflict should avoid locating, to the maximum extent feasible, military objectives within or near densely-populated areas,’ it says.

The critical response by Ukrainians was led by President Zelensky, who accused AI of seeking to ‘amnesty the terrorist state and shift the responsibility from the aggressor to the victim’. Pokalchuk said the report did not reflect the context of the war and that AI did not give adequate time to the Ukraine military to respond before publication.

The joint Ukrainian initiative of human rights organisations, Tribunal for Putin, published a statement concluding that AI’s report ‘does not contain a detailed statement of the collected facts and an analysis of important factors that would allow [it] to assert the presence of violations of international humanitarian law by the Armed Forces of Ukraine.’

Ukrainian advocate Viktor Ovsyannikov, attorney for 21-year-old Russian solider Vadim Shishymarin, has received pay of around 25,000 Ukrainian hryvnia, or 675 US dollars, for contesting the country’s first war crimes trial. On July 29, the Kyiv Court of Appeal reduced the life sentence of Shishymarin – who confessed to the murder of 62-year-old Oleksandr Shelipov – to 15 years.

Ovsyannikov regularly accepts cases from the Center for Free Secondary Legal Aid, and has previously, if briefly, represented ex-President Viktor Yanukovych. In an interview in the Kyiv Court Reporter, Ovsyannikov notes that he was appointed on April 20, that is one month before the trial verdict. He says all defendants have the right to representation, and believes Shishymarin is a ‘scapegoat’ for those responsible for the war.