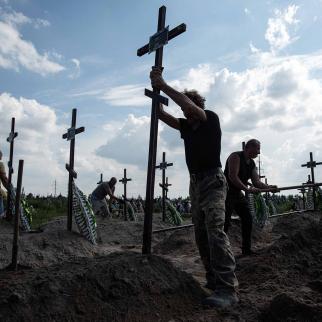 Burial service for unidentified bodies in Bucha on August 17, 2022. Russian forces occupied Bucha for the first month of its assault on Ukraine, before abandoning its plan to seize the Ukrainian capital. © Alexey Furman/Getty Images

Ukraine: How Propaganda Can Incite Genocide

There is a strong case to be made for bringing charges against Russian propagandists for one of the most serious of international crimes.

Interviews are being conducted with Ukrainian refugees in at least 22 countries to collect evidence regarding war crimes.

The prosecutor general office initiated the We Need Your Stories campaign to motivate Ukrainian citizens who witnessed or were victims of war crimes and are currently abroad to testify about them. As part of the campaign, refugees can now turn to foreign law enforcement to give evidence.

Latvian law enforcement officers had spoken to nearly 100 refugees about the shelling of Mariupol, Kyiv and Kharkiv cities, as well as imprisonment and torture. Testimonies collected included on the use of phosphorus bombs in Rubizhnye and an airstrike on a school in Chernihiv.

Kostin told reporters that over a dozen countries had already privately indicated their support for the creation of a special tribunal to hold Russia accountable for the crime of aggression.

Meanwhile, experts from the ministry of internal affairs of Spain came to Kyiv to prepare an investigation into Russian war crimes together with the office of the prosecutor general of Ukraine.

The appeals court confirmed the verdict in the case of a Russian soldier convicted for shelling a residential building case in Chernihiv.

The Chernihiv court of appeal upheld the initial verdict and sentenced Russian military tank gunner Mykhailo Kulikov to ten years in prison for violating the laws and customs of war.

The gunner was charged with carrying out the illegal order of his battalion commander and firing fired a high-explosive 125 mm calibre projectile at a residential high-rise building in Chernihiv on February 26. The building was not a military target and all its individual living quarters were completely destroyed.

DNA material is being gathered among the residents of Izyum for the identification of the dead, the Kharkiv regional prosecutors’ offices reported.

On November 2, a mobile laboratory donated by the French government began operating in Izyum to take DNA samples from people whose relatives had disappeared or been buried in the district.

Law enforcement officers have  discovered 1,077 bodies in the liberated territories of Donetsk, Kharkiv and Kherson.

The process will also provide an opportunity to identify a deceased person in any part of the territory of Ukraine, according to data entered into the Unified State DNA Database.

Two Russian servicemen were found guilty and received lengthy prison sentences for the brutal treatment of civilians and sexual violence against a minor in a village in the Chernihiv district.

In March, the soldiers moved into a house with a Ukrainian grandmother and her two grandchildren. The prosecution said that one of the servicemen, a unit commander, repeatedly tried to rape the 16-year-old granddaughter. He used physical and psychological violence including hitting her on the head with a weapon and attempting to choke her, as well as threatening to kill her family and hand the girl to other soldiers to be gang raped. Her brother was repeatedly beaten and kept outside, handcuffed and in his underwear in freezing weather.

One soldier received a ten-year sentence, while the other was handed a 12 year term. The trail was held in absentia.

Ukrainian prosecutors continue to record crimes in the Kherson region; most recently the bodies of a man and woman were exhumed in the village of Visokopillya.

According to the investigation, a Russian soldier shot an unarmed local couple in their own yard on June 1 as the area was being occupied. They died on the spot from gunshot wounds and were later buried by local villagers.

Law enforcement officers established the place of burial of the deceased at the local cemetery and exhumed two bodies with signs of violent death, which were sent for forensic research. A pre-trial investigation is ongoing.

On October 3, the police opened 54 criminal proceedings regarding war crimes committed by the Russian military in the Kherson region.