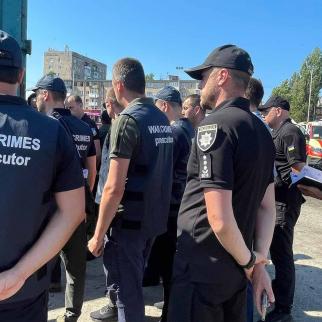 Mykola Gnatovskyy, a European Court of Human Rights (ECHR) judge from Ukraine said that the largest number of complaints currently submitted to court were now against the Russian Federation, even though it was no longer a member.

Since September 16, Russia has not been a party to the convention on human rights and fundamental freedoms, having been was expelled from the Council of Europe in March in connection with its attack on Ukraine.

“But the court has the so-called residual jurisdiction — it must consider all complaints against the Russian Federation filed in connection with the events that occurred before September 16,” Gnatovskyy said in an interview with Ukrainian media outlet Graty. “And this is almost 17,500 complaints at the time of termination of the participation of the Russian Federation in the ECHR.”

Police have opened 28 criminal proceedings into alleged war crimes committed by the Russian army in the Kherson region according to a statement by the first deputy of the minister of internal affairs Yevgeny Yenin.

“More than 9,400 civilians died and about 6,800 were injured,” the statement continued, adding that police continued to record new crimes in the territories liberated by the Ukrainian military forces.

“As soon as the Russians escaped from Kherson, they started shelling civilians every day. About 600 war crimes have already been documented by investigative units of the National Police in the de-occupied territory of the Kherson region,” the official added.

The Ukrainian ministry of justice has signed a memorandum on providing free legal aid in ensuring proper representation in cases related to war crimes.

The other parties are the International Association of Lawyers and the Ukrainian Coordination Center for the Provision of Legal Aid.

“By signing this document, we have proven our readiness for mutually beneficial cooperation in the areas of cooperation defined by the memorandum, for the implementation and dissemination of the best global practices for ensuring proper representation in cases related to war crimes," deputy minister Valeriya Kolomiets said.

The memorandum, which will be valid until December 31, 2023, provides better international expertise on issues of free legal aid in cases related to war crimes.

In addition, each Russian soldier accused of war crimes in Ukraine will have a free defence lawyer appointed.

Ukrainian prosecutor general Andrii Kostin stated that 18 countries were investigating Russian war crimes. He made the announcement during a meeting of justice ministers of the G7 countries to discuss the coordination of war crimes investigations.

Kostin also called on the G7 ministers to contribute to the creation of the Special Tribunal for the Crime of Aggression and to support Ukrainian law enforcement officers.

“Prosecutors perform their duties even under enemy fire, but we need help to continue this work,” he said.