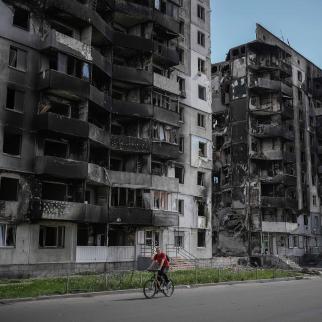 War torn buildings blight the skyline in Borodianka Ukraine. The towns around the capital were heavily damaged following weeks of brutal war as Russia made its failed bid to take Kyiv. © Christopher Furlong/Getty Images 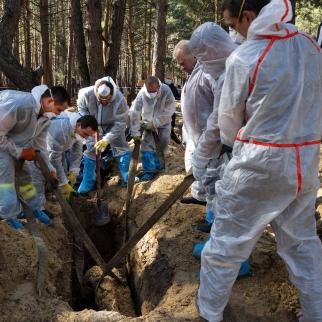 Large teams of forensic experts work together with law enforcement officers and criminologists to collect evidence for future trials.

On September 23, the chair of the independent international commission of inquiry on Ukraine, Erik Møse, told the UN Human Rights Council that “based on the evidence gathered by the Commission, it has concluded that war crimes have been committed in Ukraine”.

Investigations have been carried out so far in 27 towns and settlements in the Kyiv, Chernihiv, Kharkiv and Sumy regions. More than 150 victims and witnesses were interviewed.

“Witnesses provided consistent accounts of ill-treatment and torture, which were carried out during unlawful confinement… Interlocutors described beatings, electric shocks, and forced nudity, as well as other types of violations in such detention facilities,” he said.

Near Izyum city, in the Kharkiv region, 447 bodies were exhumed at a mass burial site.

“Five children were among the dead,” the state emergency service reported.

For more information on how prosecutors documented war crimes in the Kharkiv region see here.

Photos of Izyum exhumation from the General Prosecutor Office here.

In mid-September, Estonia joined Ukraine's lawsuit against the Russian Federation regarding genocide. It formally submitted a declaration of intervention to the International Court of Justice (ICJ) in relation to the ongoing war and more specifically Russia's non-compliance with the convention on the prevention and punishment of the crime of genocide, according to media reports.

Estonian foreign minister Urmas Reinsalu said that “Russia's aggression on the pretext of preventing and punishing genocide has seriously undermined the meaning of such a horrible crime”.

"It's usually difficult to prove intent to commit genocide," Ukrainian prosecutor general Andrii Kostin said during a visit to the US, but added that in this case experts had found signs in the actions of the Russian army.

The Ukrainian parliament adopted a draft law on improving cooperation with the International Criminal Court (ICC).

This new rule provides ICC employees the opportunity to take procedural actions on the territory of Ukraine. Until now, this had only been extended to ICC prosecutor Karim Khan.

The draft law’s entry into force will facilitate faster investigation of war crimes, according to official information. The Ukraine prosecutor general’s office posted on its website that the adoption of changes to legislation to ensure the effective work of Khan and his team in Ukraine was also at the final stage.

On September 22, President Volodymyr Zelensky established a working group to focus on the issue of creating a special international tribunal on the crime of aggression against Ukraine.

Members of the group will work out proposals for the rapid creation of a special international tribunal on the crime of aggression against Ukraine.

The Ukrainian ministry of justice also reported that it had discussed the development and implementation of an international compensation mechanism for war victims at the UN general assembly.