Russian military personnel at the post office in Mozyr, Belarus. © Screenshot from the video of the Telegram channel "Belarusian Haiun" 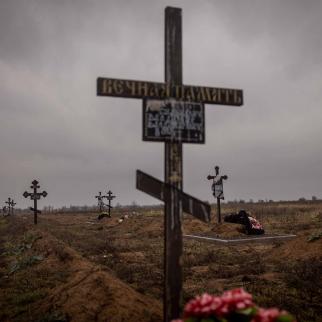 The graves of more than twenty men that were reportedly killed by Russian forces are seen at the Kherson city ceremony on November 20, 2022 in Kherson, Ukraine. Ukrainian forces took control of Kherson last week, as well as swaths of its surrounding region, after Russia pulled its forces back to the other side of the Dnipro river. © Chris McGrath/Getty Images

Tortures and Shooting of Civilians in Kherson

The bodies of 63 people showing signs of torture had been discovered as well as 11 ad hoc detention centres. Officials believe that torture was used in four of these prisons, including one which had a separate cell for teenage captives.

Specialised investigative teams continue to document war crimes including the shooting of civilians.

Russian serviceman Mykyta Chybrin has offered to cooperate with the UN and the International Criminal Court (ICC) over war crimes committed in the Kyiv region town of Bucha.

Russian human rights defenders said that Chybrin was injured during fighting and did not himself take part in any abuses. Evacuated back to Russia, he then travelled to Madrid via Kazakstan.

He served in military unit No 51460 of the 64th motorised rifle brigade stationed in the village of Kniaze-Volkonske, Khabarovsk region.

The soldiers of the 64th motorised rifle brigade arrived in Bucha in mid-March. Over the next 18 days, 12 people were killed in one Bucha district the brigade controlled, including all the residents of six houses where the soldiers set up camp.

The “war department” of the prosecutor general’s office has become the coordinating centre for the entire war crimes investigation system, its head said in an interview with Ukrainian media outlet Graty.

Yurii Belousov explained that his department was working with security service investigators on proceedings involving Russia’s highest political and military echelons for their roles in attacks on critical infrastructure facilities. The war office had also partnered with the police to work on murders, cases of sexual violence, torture, and illegal detention committed by Russian military personnel. Several joint probes with the State Bureau of Investigation and National Anti-Corruption Bureau were also ongoing.

“Deadly shootings, torture, sexual violence, mass burials, attacks on critical infrastructure are what our priorities are right now,” he said.

In addition, there was a special unit in the department that works only on the crime of aggression and another unit that liaised with international partners including the ICC.

The most recent department to be established dealt only with crimes of sexual violence.

“We want to create our own unique war crimes investigation mechanism in Ukraine, which should work like clockwork,” Belousov said.

The office of Ukraine’s prosecutor general announced that the mass shelling of Ukraine on November 15 was a continuation of the Russian policy of genocide.

According to the office of the prosecutor general, this and previous shellings were a Russian strategy to destroy Ukrainians.

The convention on genocide describes any of the following acts committed with intent to destroy, in whole or in part, a national, ethnical, racial or religious group, as such as “deliberately inflicting on the group conditions of life calculated to bring about its physical destruction in whole or in part”.

Mobile groups documenting crimes against children have been deployed in the Kyiv, Chernihiv and Sumy regions. The teams include juvenile police officers, investigators and psychologists.

Police teams are now being sent to the de-occupied territories of Kharkiv and Kherson regions.

Deputy head of the police’s juvenile department, Yaroslav Shanko, said that 431 children had been killed during the conflict and 835 injured. In addition, he said that 11,129 Ukrainian children were illegally deported to the territory of the Russian Federation, of whom only 103 had been returned.

UN: POWs on Both Sides Abused

Prisoners of war on both sides of the conflict in Ukraine told UN human rights investigators that they had been subjected to torture and ill-treatment while held captive.

"Ukrainian POWs have said that they were fre quently subjected to prolonged beatings, threats, electric shocks and dog attacks,” the head of UN human rights monitoring mission in Ukraine Matilda Bogner said in a statement. “Both men and women prisoners reported being subjected to various forms of sexual violence.”

Russian POWs held by Ukraine told interviewers of summary executions and several cases of torture and ill-treatment, mostly when they were captured, first interrogated or moved to transit camps and places of internment.

As part of the ICC verdicts in the case of the downing of flight MH17, the court ruled that from 2014 the conflict in Ukraine became international due to Russia’s overall control of the separatist groups in the country’s east. At the time, Russia did not recognise its participation in actions on Ukrainian territory.

The Malaysia Airlines Boeing-777, travelling from Amsterdam to Kuala Lumpur, crashed in occupied Donetsk on July 17, 2014. All 283 passengers and 15 crew members on board were killed.

The court found Igor Girkin, Serhii Dubinsky and Leonid Kharchenko guilty in absentia and sentenced them to life imprisonment and to pay a total of 16 million euros in compensation. One indictee was acquitted due to lack of evidence.

“This judgement confirms many of the factual findings made regarding the classification of armed conflict,” the Global Right Compliance legal community said.