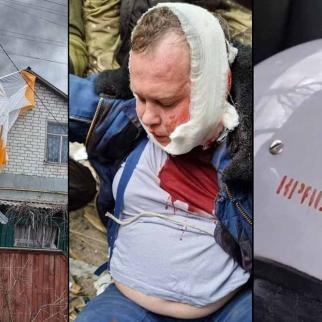 Ukrainian human rights defenders and the US-based Lemkin Institute for Genocide Prevention submitted a common notification to the International Criminal Court (ICC) requesting an investigation into the crime of genocide by the Russian Federation.

The appeal presents evidence of genocide committed by Maria Lvova-Belova, the presidential commissioner of the Russian Federation for Children's Rights.

Lvova-Belova has actively placed Ukrainian children up for illegal adoption by Russian families. Human rights defenders argue that such actions are part of the crime of genocide against the Ukrainian nation, with the intention of partially destroying it.

Ukrainian law enforcement officers continue to document new war crimes committed by Russian forces on the liberated territories in the north, east and south of the country.

In the Kharkiv region, in Boriv district, law enforcement officers found another mass burial site. According to preliminary data, at least 17 people - civilians and soldiers - were buried in the grave. Residents of the village of Kopanky reported that the occupiers had collected the dead throughout the district and on April 13 dug a three metre deep hole with an excavator and dumped all the bodies there. Then the burial place was levelled with tanks.

About 1,000 bodies have been exhumed in the newly liberated territories of Ukraine. Almost 450 were found in a mass grave in Izyum.

Elsewhere, officials started an investigation after a rocket attack on the city of Dnipro. Two people died and four more injured. Civilian infrastructure including a petrol station and cars were damaged.

Law enforcement officers also inspected destroyed infrastructure in the Kochubey community, finding an ammunition store and burned-out armoured vehicles on the grounds of a school.

Elsewhere, police opened criminal proceedings regarding the Russian shelling of a car carrying civilians in the Oleshkiv community. Two people died and a child was injured in the incident.

Special police groups for recording sexual crimes committed by Russians in Ukraine have begun work in the Kherson and Donetsk regions. They previously investigated wartime sexual violence in the in Kyiv, Sumy, Chernihiv and Kharkiv regions.

The teams are made up of specialists, including police officers previously specialising in domestic violence, prosecutors, and psychologists.

"They collect a full evidence base, in particular cooperating with the prosecutor's office so that a complete package of documents is collected on this or that fact,” she said, adding that 43 criminal proceedings regarding sexual violence by Russians in Ukraine had already been initiated.

Russia has committed  over 450 crimes against journalists and media in Ukraine since the full-scale invasion began, according to monitoring data. This includes the deaths of 42 journalists of whom eight were killed while performing their professional duties.

The largest independent media in Ukraine, Suspilne Broadcasting, submitted an application to the European Court of Human Rights over alleged human rights violations including shelling and airstrikes by Russia on TV towers and the seizure of infrastructure facilities.

“Combat orders for the invasion of Ukraine and a map of the Kharkiv region with the route of movement have been found,” police said in a statement.

The discovery was made in a school basement and included lists of personnel of Russian Armed tank brigades and information about local Ukrainian infrastructure.

Investigators have opened criminal proceedings related to the documents