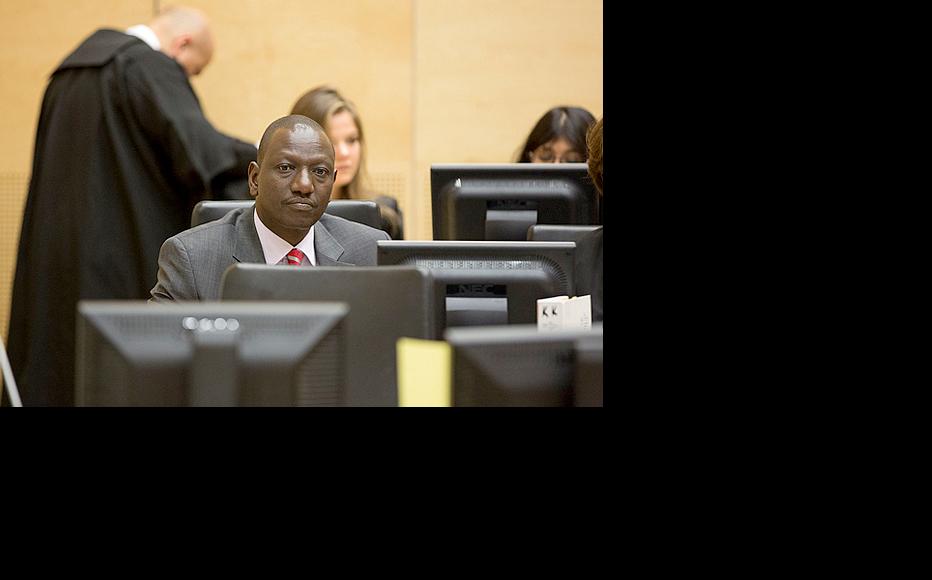 Kenya's Deputy President William Ruto on the first day of trial at the International Criminal Court. (Photo: ICC-CPI)
The link has been copied

The lawyer representing Kenyan deputy president William Ruto at his trial at the International Criminal Court (ICC) used the opening of the case this week to issue a scathing denunciation of the charges against his client.

“We say there is a rotten underbelly to this case that the prosecution has swallowed hook, line and sinker; indifferent to the truth, all too eager to latch onto any version, any account, any story that somehow ticks the boxes we have to tick [to support the charges]” lawyer Karim Khan said in his opening statement to the court.

The trial of Deputy President Ruto and his co-defendant, former broadcaster Joshua Arap Sang began on September 10 in The Hague, nearly six years after the events in Kenya that prompted the ICC to launch an investigation in March 2010.

It is the first time a sitting state official has been brought before the ICC.

Ruto and Sang are charged with inciting and organising the violence that engulfed Kenya following the disputed outcome of a presidential election in December 2007. More than 1,100 people were killed and 650,000 others uprooted from their homes in months of political and ethnic violence.

The defendants are each facing three counts of crimes against humanity covering murder, persecution and forcible population transfer.

In a separate case, Kenyan president Uhuru Kenyatta is to stand trial on similar charges.

Ruto is standing trial for orchestrating the violence, while Sang stands accused of using his radio programme to fan and coordinate attacks in Kenya’s Rift Valley. The charges relate to attacks in Uasin Gishu and Nandi districts.

In her opening statement, prosecutor Fatou Bensouda countered claims that the attacks carried out against supporters of the Party of National Unity (PNU) by supporters of Ruto’s opposition Orange Democratic Movement (ODM) in late 2007 and early 2008 were unforeseen and spontaneous.

“On the contrary, this was a carefully planned, coordinated and executed campaign of violence, specifically targeting perceived PNU supporters, their homes and their businesses,” Bensouda told judges. “Mr Ruto’s ultimate goal was to seize political power for himself and his party through violent means, in the event that he could not do so through the ballot box.”

In the Rift Valley, members of the Kalenjin ethnic group broadly backed the ODM in the 2007 general election, whereas ethnic Kikuyus voted mainly for the PNU.

The prosecution alleges that the plan to use violence was hatched over a period of 18 months in the run-up to the ballot.

“Using community structures, [Ruto] gathered together an army of loyal Kalenjin youth to go to war for him,” Bensouda told the court.

Prosecutors allege that, by whipping up local support within the Rift Valley, Ruto’s goal was “to permanently alter the ethnic composition of the area” and consolidate his political power among the Kalenjin.

“He also stoked the flames of anti-Kikuyu sentiment, both personally at public rallies, and indirectly through other influential speakers and through the media,” Bensouda said. “And when the election was lost, he gave the order to attack.”

Prosecutors informed the court that over the coming months, they would present 22 witnesses from the Rift Valley to provide first-hand evidence of the violence.

“They will describe how large groups of Kalenjin youths armed with traditional weapons such as bows and arrows, and many dressed for war, descended on one location after another,” Anton Steynberg, for the prosecution, told the court. “Witnesses will testify how they saw large numbers of these youths ferried into certain locations by lorries.”

Responding to this opening statement, Khan alleged that the prosecution’s investigation had been “insufficient and derisory”.

He challenged the foundations of the prosecutor’s case. The prosecution, he said, had “a completely skewed focus that has led it to get the wrong person for the wrong crimes”.

Ruto’s lawyer played a series of media interviews recorded for Kenyan television before his client was charged by the court, in which he welcomed the ICC investigation into the post-election violence and insisted that he wanted to improve the lives of all Kenyans.

“We should give [former ICC prosecutor Luis Moreno] Ocampo and any arm of government the support they need to help us sort out our problems,” the deputy president told the interviewer in one of the clips.

In another, Ruto was shown at one of his election rallies in the run-up to the December 2007 polls. The defence used this to argue that Ruto reassured people that they would not be forced out of the Rift Valley. It argued that Ruto did not harbour any negative sentiment towards non-Kalenjins.

“If you bought a farm here, whether you are from western Province, or from Pokot, from Lamu, or from Vanga, if you have a farm here this is your home,” Khan said, reading a translation of Ruto’s words at the rally.

Addressing the criminal responsibility of the second defendant, Sang, prosecutors told judges that the former broadcaster had been “the voice of the post-election violence in the Rift Valley”.

“Mr Sang placed his prime-time radio show at the disposal of the network to spread their message and coordinate their activities,” Bensouda said.

“Mr Sang broadcast anti-Kikuyu rhetoric, spread the word of Mr Ruto’s rallies, and even helped to coordinate the actual attacks through coded messages.”

In response, Sang’s lawyer told judges that the prosecution had “mischaracterised” his client and that its case “did not resemble the real Mr Sang and his actions and intentions in 2007 and 2008”.

“[Sang] was instrumental in calling for peace during the violence,” defence lawyer Joseph Kipchumba Kigen-Katwa said.

Kigen-Katwa played a succession of recordings of radio broadcasts from early January 2008 in which Sang was heard calling for an end to the violence.

He said his client had condemned one horrific event when a group of Kikuyu women and children were barricaded inside a church in Kiambaa before it was set on fire. Between 17 and 35 people were killed.

“It is wrong and not befitting for any human being to engage in such an act,” Sang told listeners to his radio programme, according to the recording presented in court. “Let us refrain from destruction, let us refrain from killing.”

Sang’s lawyer went on to question the prosecutor’s motives for bringing charges against his client, referring to the original number of six suspects divided equally between two cases against supporters of the ODM and PNU.

Kigen-Katwa argued that Sang’s case was a matter of convenience, so that the ICC proceedings would appear balanced.

“Sang was the unfortunate collateral damage,” Katwa Kigen said. “The prosecutor needed an even number in case one and two.”

On September 11, Sang himself gave an unsworn, emotional statement to the court in which he protested his innocence.

“If prosecution could have investigated and not allowed itself to be misled, they would not have the wrong person here today in court,” Sang told judges.

The deputy president’s trial has been widely anticipated in Kenya, where the ICC has suffered from declining support since Ruto and Kenyatta were elected in March.

In the capital Nairobi, people crammed into restaurants and mobile phone shops to follow the proceedings on television screens.

One waitress who stood gazing at the screen told of her satisfaction at seeing the cases finally begin.

“I am glad this has finally come to pass. We have been waiting for this day with bated breath,” she said. “I don’t understand the court jargon, but I know crimes were committed in this country for which one must account.”

The ICC put up a screen at one of the city’s main hotels so that local journalists could follow proceedings.

Following the conclusion of the opening statements, the court adjourned until September 17, when the prosecution will call its first witness.

Witnesses had been scheduled to testify directly after the opening, but they had not yet arrived in The Hague.

Amid widespread claims of intimidation and interference with its witnesses, Steynberg told the court that those based in Kenya would be among those to testify first.

“[We] would like to get their evidence on record as soon as possible,” he said.