As Muslims call for rebuilding and Christians say no, officials who cited planning violation struggle to contain damage.

As Muslims call for rebuilding and Christians say no, officials who cited planning violation struggle to contain damage. 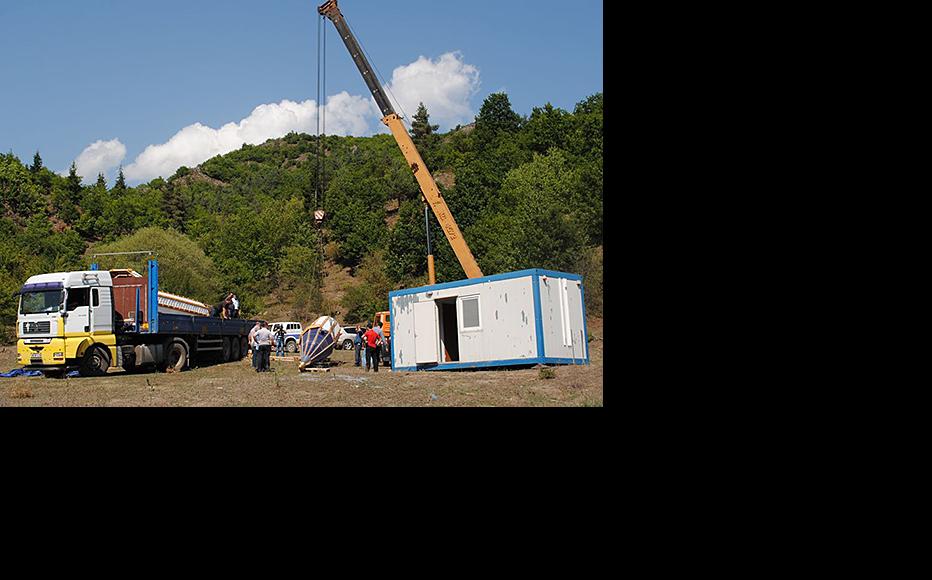 The minaret is dismantled so it can be inspected for a possible breach of planning rules. (Photo: Samkhretis Karibche newspaper) 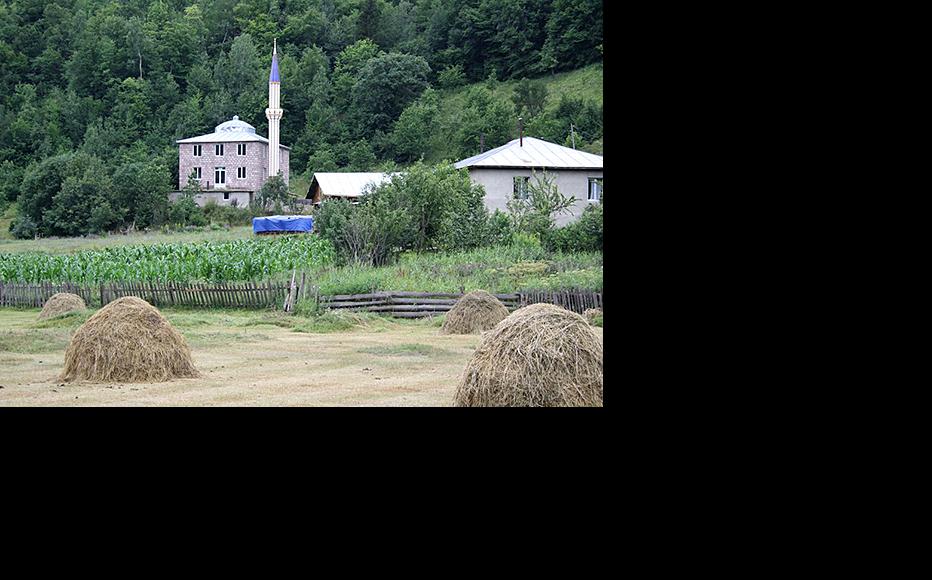 The mosque in Chela before it lost its minaret. (Photo: Samkhretis Karibche newspaper) 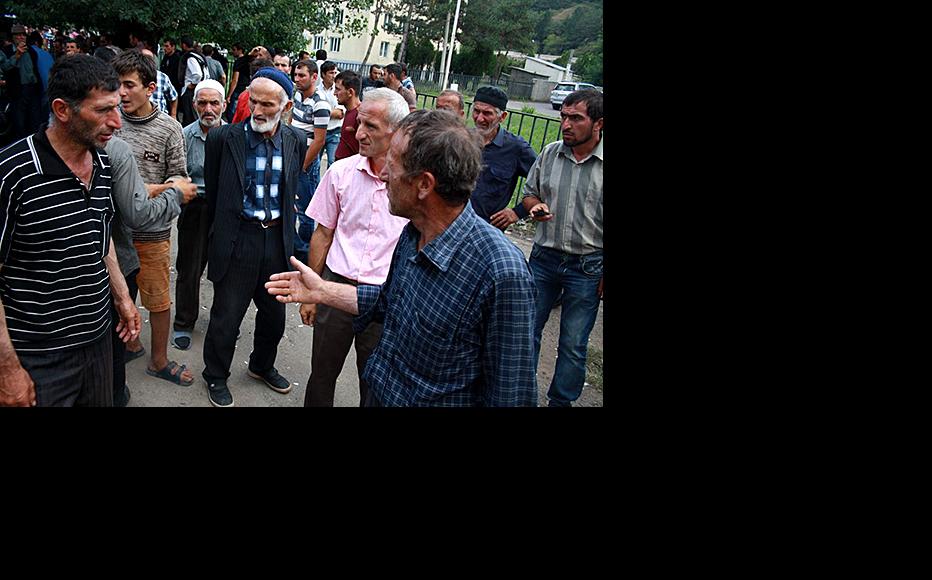 Villagers from this largely Muslim community were angered by what seemed a deliberate insult to their beliefs. (Photo: Samkhretis Karibche newspaper)
The link has been copied

The demolition of a minaret in southern Georgia has sparked protests among local Muslims, and counter-demonstrations by members of the Christian majority. Experts say this is a case of a bungled government intervention creating inter-communal tensions where none existed before.

Residents of the mainly Muslim village of Chela, in the Adigeni district of southwest Georgia, had saved up 9,000 US dollars to buy components in nearby Turkey for a minaret for their mosque. But after they put it up, government officials – specifically from the finance ministry – sent in workers to remove the structure, on the grounds that it was poorly made and did not have planning permission.

Furious villagers tried to stop the demolition, and the protests turned into clashes with police on August 26, with at least ten arrests and several injuries. The villagers later held a demonstration in Adigeni, the main district town.

The Muslims clearly felt they were being victimised, as a minority in Christian-majority Georgia.

“There are lots of crosses by the roadside, but they don’t make us feel we want to protest,” Chela resident Natela told IWPR in Akhaltsikhe, the administrative centre for the region where she had gone to press the villagers’ concerns. “I can’t understand why Muslims don’t have the same rights as other faith groups. Is that really democracy? We are appealing to the prime minister and government to pay us heed.”

Chela’s residents are originally from the Ajara region further west. Ajarans are ethnic Georgians but many are Muslim by tradition rather than Orthodox Christian. Over many years, Georgian governments have resettled Ajarans, as well as residents of other mountainous parts of the country, in lowland areas because landslides have made life too precarious.

Small demonstrations took place in sympathy in Ajara including the major port of Batumi, and also in the southeast of the country where there is another substantial Muslim minority, here ethnic Azerbaijani rather than Georgian.

In turn, the minaret issue stirred up strong feelings among Georgian Orthodox Christians in areas close to Chela. Demonstrations took place in Adigeni district and also in Akhaltsikhe, where protesters including leading churchmen blocked a road on August 29.

“Our main demand is for the minaret not to be put back in the village,” one of the protest organisers Giorgi Kopadze said. “Let’s demand a referendum on it – the Georian nation must decide whether the minaret should go up or not. We say no!”

Another participant, Goderdzi Kublashvili, warned, “If they bring the minaret back, it’ll be over our dead bodies. No other way. Long live Christian Georgia!”

The government insists that it is simply applying the normal construction regulations, and that its actions have nothing to do with religion. The finance ministry, whose officers carried out the demolition, said the parts for the minaret were imported without proper customs procedures and assembled without permission.

“You can’t behave like that,” Prime Minister Bidzina Ivanishvili said at a meeting with journalists on September 4. “You come out of your house and there’s a minaret there, with no prior agreement, no design plans, and the local authorities haven’t been informed.”

However, finance ministry officials later acknowledged that things had not gone as well as they might have, and indicated that the minaret might be restored to its place on the mosque.

“This was a technical matter which should have been resolved by technical means,” Finance Minister Nodar Khaduri commented. “It’s very regrettable that matters took such a turn.”

Ministry spokesperson Tamar Andriadze said technical experts were examining the dismantled minaret, which was under police protection a couple of kilometres outside the village.

“Once the examination has been done, and the relevant customs procedures completed, the mosque will be reassembled. The [finance ministry] revenue service will do the assembly,” Andriadze said.

Human rights defenders question why it was necessary to remove the minaret instead of just resolving the technical and legal issues and thereby avoiding an escalation in tensions in the ground.

“We believe matters… could have been resolved without dismantling the minaret. Yet the revenue service opted for the crudest, most unacceptable of tactics,” a joint statement issued by four rights NGOs said.

Natia Katsitadze, who heads the judicial affairs department at the office of the Public Defender, Georgia’s official ombudsman, said the government had needlessly provoked a confrontation.

“This is about freedom of confession,” she said. “This is a sensitive issue and we’ve already seen clearly that the state needs to be more circumspect when it comes to such matters.”

Tamta Mikeladze of the Centre for Human Rights Research and Monitoring, also blamed the government for “using force against people in a negative way, taking a decision of questionable legality and proportionality, and offending people’s religious sensibilities”.

The Republican Party, one of Prime Minister Ivanishvili’s coalition allies in the ruling Georgian Dream bloc, joined the criticism coming from NGOs and opposition parties.

“When it comes to religion, the state has to take sensitivities into account and do all it can to prevent religious confrontations,” a statement from the party said.

Others placed some of the blame on the Georgian Orthodox Church, which is strongly associated with the country’s national identity and is followed by over 80 per cent of the population.

“Representatives of the Patriarchate constantly refer to Muslims and also people of other faiths as enemies of the country and such like,” Beka Mindiashvili, head of the Centre for Tolerance, part of the ombudsman’s office, told IWPR. “In 1992 and 1993, the Patriarchate stated that any Georgian who betrays Orthodoxy is an enemy of country and church. That discourse continues even now.”

The Patriarchate has called for calm, but it has pointedly directed its remarks at Muslims, not its own adherents.

“What’s happening now is an attempt to incite religious strife,” church spokesman Father David Sharashenidze said in an interview for IWPR. “These forces are trying to set Christians against Muslims and thereby discredit church and state.”

Sharashenidze drew comparison with incidents in three other parts of Georgia over the last year.

In the most recent, in early June, Muslims were prevented from holding Friday prayers in Samtatskaro, an Azerbaijani village in the southeast. The local imam was forced to leave the village after receiving threats. Two similar confrontations happened in late 2012, both in the west of Georgia. Both involved Orthodox Christians taking action against Muslim neighbours.

In Chela, the mood remains uncertain while the minaret’s fate is in the balance. The angry protests did not involve the Christians from Chela itself. Residents point out that like the Muslims here, they are incomers resettled from a mountain area somewhere else – in their case Racha.

Georgia
Connect with us