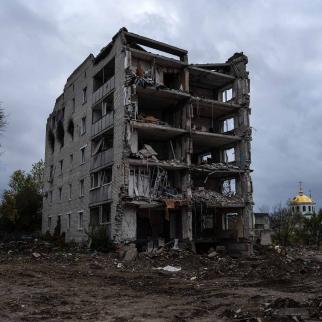 An apartment block lies in ruins after being destroyed during fighting between Ukrainian and Russian occupying forces, on October 24, 2022 in Izyum, Kharkiv oblast, Ukraine. Ukraine's intelligence chief has said that Russia is sending more troops into the city of Kherson and may be preparing to defend it against a Ukrainian counteroffensive. © Carl Court/Getty Images

As huge efforts to collect evidence continues, attention is turning to the targeting of civilian infrastructure. 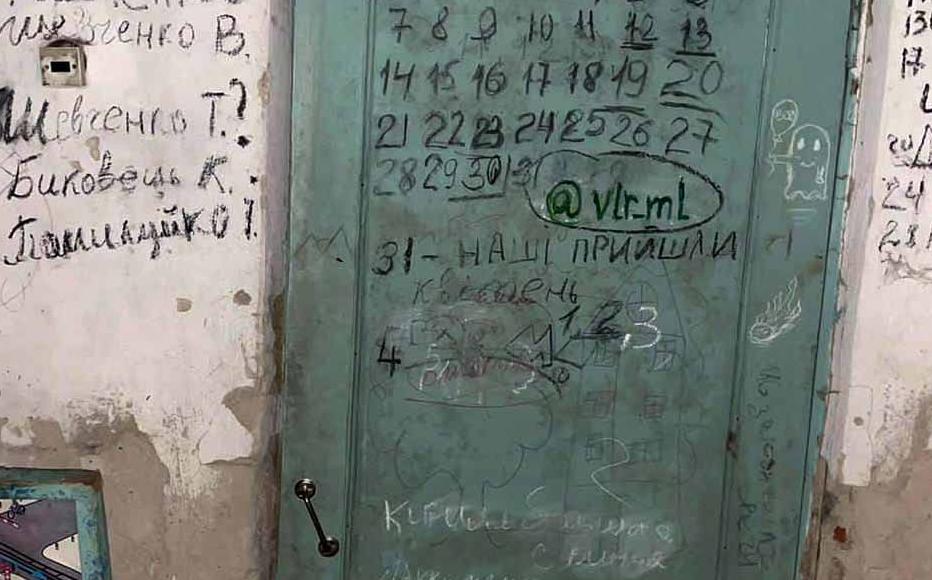 Russian soldiers imprisoned hundreds of civilians in this basement in Yagidne village in the Chernihiv region for weeks. The list of those who died or were killed was kept on the wall. © Iryna Venediktova, former Prosecutor General of Ukraine/Facebook
The link has been copied

Three Russian servicemen have been accused of violating the laws and customs of war during the March 2022 occupation of Yagidne in the Chernihiv region, including by imprisoning hundreds of civilians in a cellar for weeks.

A special pre-trial investigation at the Chernihiv district court indicted Ivan Oorzhak, Chayan Chinan and Kezhik-ool Shaktar-ool - all natives of the republic of Tuva of the Russian Federation – for their actions in the village.

Their summons was published in the Government Courier newspaper of the cabinet of ministers of Ukraine. “Your appearance in court as a defendant is mandatory,” it read.

The absentee trial procedure requires two or more summons of the accused to the court. Only after this will they be considered duly notified, and the court, after the prosecution's request for a special trial in absentia, can proceed to consider the merits of the case.

According to the prosecutor general's office, Ukrainian law enforcement officers identified nine Russian soldiers involved in crimes committed in Yagidne. They are all from the same military unit 55115, stationed in the city of Kyzil in the republic of Tuva.

Oorjak, 26, Chinan, 35, and Shaktar-ool, 28, all soldiers of the mortar platoons of the 2nd mechanized brigade of this unit, were among them.

On March 3, Russian troops occupied Yagidne, 20 kilometres from Chernihiv, and drove locals out of their homes. People were forced to undress outside in the cold as soldiers looked for patriotic tattoos and military-issue underwear. Mobile phones were taken from the villagers, who were warned that if any devices were hidden, every fifth man would be executed.

Prosecutors emphasised that they believe this was part of a criminal order from the command of the Russian armed forces, and amounted to actions with the direct intention of brutalising the civilian population.

According to the investigation, Chinan, a sergeant, broke into a house on Vyshneva Street in Yagidne village on the evening of March 3, the first day of the occupation. Threatening to fire his gun, he forced residents out of the cellar, after which, together with other Russian soldiers, he ordered one man to lie face down on the ground and began to search him.

During the search, a mobile phone was found in the man’s pocket. The Russian soldiers began to assault him, kicking and beating him on the head, torso and legs. After the beating, the man was stripped of his outer clothing and his body checked for tattoos that might indicate his political allegiance.

Then the victim was then taken to his home, where he indicated the location of a rifle he owned. After that Chinan, according to the investigation, deliberately struck the victim in the chest with the butt of a machine gun.

He then forced the people to return to the cellar at gunpoint and locked the door. Two days later, on March 5, other Russian military personnel ordered them out of the cellar and brought them to the basement of the village school. The entire civilian population of the village was taken there.

According to official information, more than 350 people were forced into the basement which was just 197 metres square.  The Russian headquarters was set up in the school, so that the civilian hostages effectively became human shields. There were a total of 77 children in the basement, the youngest of whom was 18 months old. The oldest hostage was 93 years old.

The civilians were held captive for almost a month in cramped, suffocating, insanitary conditions and in complete darkness with little food or water.

As a result, according to law enforcement officers, ten civilians died in the basement between March 9 and 28. The prisoners kept a register of deaths on the wall of the basement.

"Before dying, almost every other person lost their mind. It was as if in a parallel reality,” one eyewitness told the Sudreporter outlet in an interview on April 11. “They could, for example, get up at night and ask, ‘Hey, who's in line at the store?’ Another two or three days passed and the person died. Two grandmothers and two grandfathers died near me.”

The woman said that at first the corpses were placed in a fire pit, and when the weather began to get warmer, the occupiers allowed them to be carried to the cellar in a neighbouring yard. When half-a-dozen bodies were collected, she continued, the Russians gave permission for them to be buried. But the funeral group immediately came under fire, so the first time they were only able to bury two and had to leave the other bodies in a pit.  On March 30, the Russians retreated, but the hostages in the basement did not immediately realize this and spent another night in the basement.

According to Ukrainian law enforcement officers, 17 more villagers were killed by the Russian military during the occupation of Yagidne. Out of 180 houses in the settlement, 148 were damaged and 16 were completely destroyed. Eyewitnesses reported widespread looting during the occupation, with washing machines, televisions, microwaves, electric kettles and other valuables stolen.

In May, prosecutors in the Chernihiv region joined experts of the office of the prosecutor of the International Criminal Court (ICC) in visiting the village to record war crimes.

The Ukrainian portal Judicial Power reported that 15 victims had been declared in the case of Oorzhak, Chinan and Shaktar-ool.

A lawyer has been assigned to each of the accused.

Investigators and prosecutors are currently working on cases against other Russian military personnel who also allegedly committed crimes in Yagidne.