Locals say that morale is high, despite intelligence warnings that a fresh invasion could be imminent.

How Media in Belarus and Russia Joined the Information Battlefield

Both countries have been flooded with incitement alongside deliberate confusion between fiction and historical facts.

Locals say that morale is high, despite intelligence warnings that a fresh invasion could be imminent. 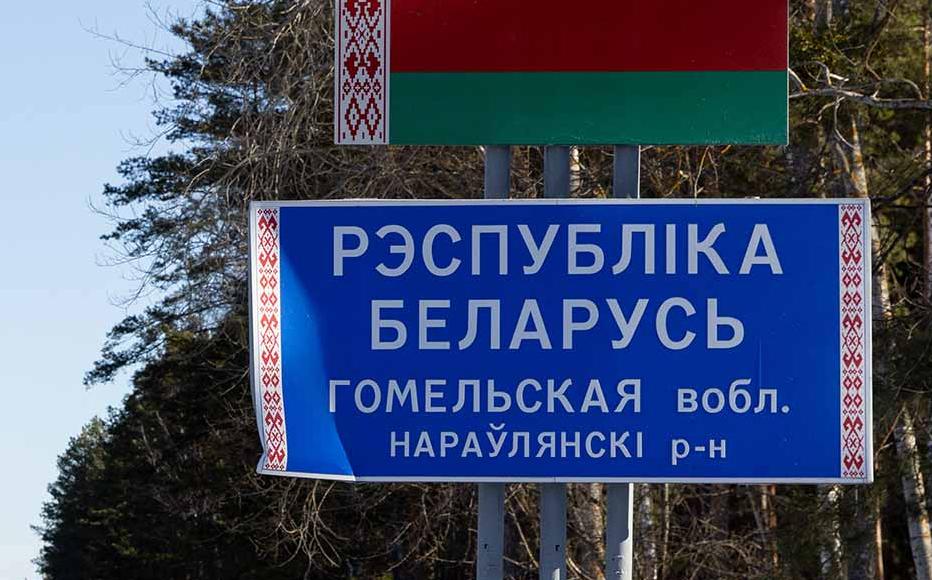 A sign showing the entrance to Belarus is seen at the Ukraine-Belarus border crossing on February 13, 2022 in Vilcha, Ukraine. © Chris McGrath/Getty Images
The link has been copied

Ukrainian officials continue to fear that Belarus may yet directly intervene in the war, with warnings that Belarusian troops could be poised to enter via the border regions of Rivne and Volyn.

President Alexander Lukashenko has long been a Russian ally, and his country served as a launching pad for the invasion of Ukraine. However, Belarus’ own forces have so far played no part in the invasion.

Ukrainian intelligence sources have repeatedly reported that Belarus was poised to deploy its own forces, most recently announcing on March 20 that an incursion was expected in within the next few days.

“A chance of invasion from Belarus is pretty high,” Viktor Yagun, a major general in the Ukrainian security service said in a televised interview, noting that the western Volyn region was particularly vulnerable as it served as a vital supply route for Western military aid.

The security prediction was that 5,000 Belarusian soldiers would enter via the Volyn and Rivne, to be followed by another group of 5,000.

Although the threat did not materialise, Ukrainian military intelligence still warn that the neighbouring country could nonetheless enter the war, noting that Belarus had redeployed four battalion tactical groups near to the Ukrainian border.

Daily air raid warnings persist in the Volyn and Rivne regions, and over the last week rockets fired from the territory of Belarus have hit military facilities and oil depots.

For instance, on the night of March 16, a military facility in the city of Sarny in western Ukraine’s Rivne region was hit by three Russian Iskander missiles launched from Belarusan territory, 80 kilometres away. Although there were no casualties or injuries, the explosion was heard across the region.

The border regions are well aware of the threat, although locals say that they have become used to it. For the last three weeks, almost all businesses have resumed work and cafes, restaurants, gyms and shops have reopened.

Olga, 29, who works as a commercial agent at the Sarny railway station, said that spirits were high.

“Courageous people live in the Rivne region and Volyn, they are ready to destroy the enemy on their land with their bare hands,” she said, adding, “The population of Belarus is not fooled by hostile propaganda as much as the Russians. They are different, more peaceful. And as my acquaintances from Belarus tell me they categorically don’t support the Russian intervention, let alone Belarusian.”

She told IWPR that while the refugees she met in Sarny feared an invasion from Belarus, she and her friends were less worried.

“My friend's relatives came from Kyiv,” she continued. “For more than a week they trembled at every loud sound and ran to the basement during every alarm. And when on March 20 they read in the media about a possible invasion of Lukashenko's army, they packed their things and left for Lviv.”

According to the Sarny city council, more than 1,500 internally displaced persons (IDPs) have registered with the local authorities. Most have come from the Kyiv region, from the cities of Irpin, Bucha and Gostomel.

Among them are Olga’s brother Maryan, also originally from Sarny, a 33-year-old window fitter who left his home in Kyiv on the second day of the war to return to stay with his sister.

His major concern now, he explained was the lack of work opportunities.

“I decided to go to my sister, and not to Lviv or Zakarpattya [regions that border Poland],” he explained. “I left those places for people who really had nowhere to go, unlike me. There is no fear because of Belarus. It is comfortable here, life is half the price compared to Kyiv. You can walk everywhere you can walk. But there is no work, finding something for a salary of 10,000 hryvnia is unrealistic. Because of the war, there are no vacancies. I live on personal savings.”

However, the Rivne and Volyn regions are too close to the fighting to be very attractive for those seeking shelter.

Jeanne, a 54-year-old teacher who asked to remain anonymous, told IWPR that she and her colleagues had prepared one of the school dormitories for IDPs. However, almost no one wanted to seek refuge there.

“The building is located one kilometre from the local military unit,” she said. “In mid-March it was subjected to rocket fire from Belarus. As soon as they see a military target at which Russia can launch missiles, people do not want to stay even for one night. Only one man agreed to spend the night. He was probably very tired.”

As the warnings of a possible intervention continue, many in Ukraine note that ordinary Belarusians were unlikely to support direct intervention. Belarusian figures, including opposition leader Svetlana Tikhanovskaya, have called on their country's military to stay out of the war.

The Ukrainian special services reported intercepted conversations in which Belarusian military figures made it clear that they expected to be wiped out by Ukrainian military immediately after crossing the border.

Military expert Vladislav Seleznev agreed that the Belarusians had little motivation to fight in Ukraine on behalf of Russia. Although they had a 17,000-strong combat force, it had little experience of active service.

“Only a small part of them participated in peacekeeping operations, which is nothing compared to the Ukrainian army,” he said, adding, “The military really refuses to enter the war against Ukraine on the side of Russia.