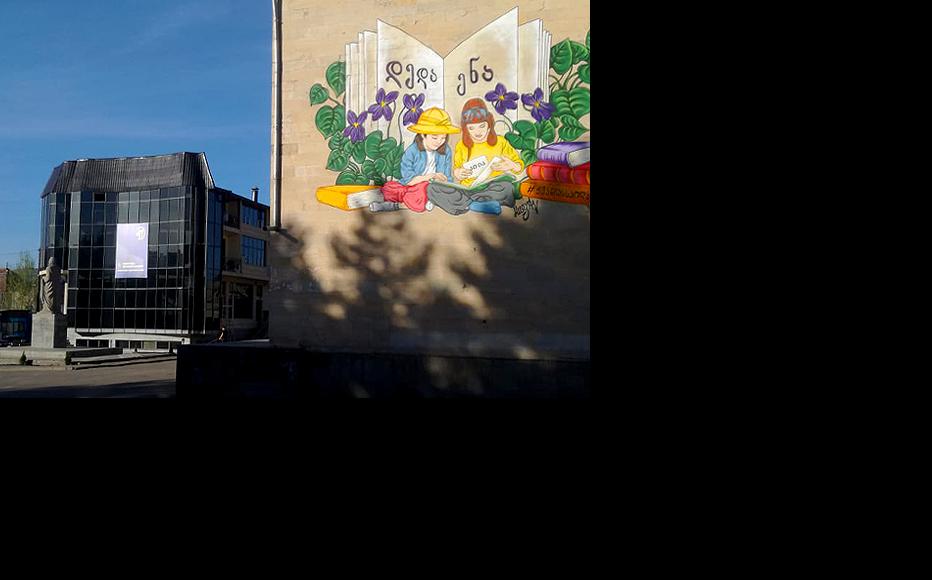 To mark Mother Tongue Day (national celebration of Georgian language) school students in Akhalkalaki helped create this mural which graces the side of the city’s Cultural Center. Nearby, a statue of Mesrop Mashtots – originator of the Armenian Alphabet guards the city’s central square. (Photo: Joseph Alexander Smith)
The link has been copied

When Georgia’s newly-elected president Salome Zurabishvili addressed locals in Akhalkalaki on April 14 this year, the location and timing were both loaded with symbolism.

April 14 is Mother Tongue Day in Georgia, and commemorates events in 1978 when mass protests forced the Soviet government to abandon plans to revoke the status of Georgian as the state language.

Akhalkalaki – a small town in south-west Georgia about 45km from the border with Armenia – is populated by a majority of ethnic Armenians.

“Now everyone has the right to restore their Georgian citizenship,” Zurabishvili announced, referring to locals who previously had automatically lost Georgian citizenship after acquiring Russian or Armenian passports. “But for that to happen, you also need to take the step of learning the state language, which is a sign that you want citizenship of this country.

“You should learn the language at least to the level necessary to pass the small test which is part of the process of restoring citizenship.”

She added that the state was doing everything possible to ensure that school children in particular were supported in learning Georgian.

Zurabishvili’s comments demonstrate that the issue of integrating Georgia’s ethnic minorities – which account for 13.4 per cent of the country’s population – remains high on the agenda.

During the Soviet period, Russian was taught in schools and was an essential means of communication in a multi-ethnic society. According to the National Statistics Office, while ethnic Armenians make up around 4.5 per cent of Georgia’s total population, in Akhalkalaki municipality they make up 92.9 per cent.

At the place where the minibus from Tbilisi stops in Akhalkalaki, a large yellow banner advertises travel to various destinations in the Russian Federation, a sign of the pull Russia exerts on this region.

Akhalkalaki was also home to a 15,000-strong Soviet - later Russian - military base, a key driver for much of the local economy. The economic collapse that followed the demise of the Soviet Union hit the Javakheti region, with its harsh winters and agricultural economy, particularly hard.

In the 1990s, large numbers local Armenians began to migrate to Russia to look for work. Seyran Bakaryan, a 60 year-old from the nearby village of Baraleti, was among them.

“Working in Russia helped keep my family alive,” he said. “There are no jobs here, and we all depend on agriculture, which is difficult because it requires a lot of investment in machinery and fertilizers … 25 years ago a relative helped me find a job laying tarmac in Russia and the money I brought back allowed me to send my kids to school, pay for their weddings… basically to give them a future.”

Like many ethnic Armenians of his generation, Seyran spent most of his working life outside of Georgia, returning to the village only during the New Year and Christmas holidays.

As such, his knowledge of Georgian is minimal and he still relies on Russian to communicate with the local authorities.

“Obviously the more languages you know the better and they should definitely teach Georgian in schools… but for us Russian is more important,” he said. “Some of us have relatives in Russia and we still go back and forth, so we need Russian more.”

The state has rolled out a number of schemes in recent years to help the country’s ethnic minorities learn Georgian.

The National Centre for Teacher Professional Development has offered Georgian courses for teachers since 2016, and also runs a project to supply native-speaker Georgian assistant teachers to schools in minority-populated regions.

Since 2010, the Four Plus One programme provides ethnic minority students with an intensive year-long course in Georgian before they start their degrees.

At the government-run Zurab Zhvania School of Public Administration, members of minority communities can sign up for language courses free of charge at the school’s regional branches.

Eka Tateshvili, who teaches at the Akhalkalaki centre, said that Zurabishvili’s comments had not been controversial among the local population.

“I think they took it in the spirit it was intended, and there was no negative response,” she said. “Everyone here knows that there are rules like this for acquiring citizenship in most other countries, and so it would hardly have come as a shock to them that they would need to learn Georgian.”

Georgia’s public education system allows for schooling in languages including Armenian, Azerbaijani and Russian in areas with a large ethnic minority population. Georgian is taught as a foreign language.

“One problem in the past was the lack of teachers able to teach Georgian in these remote village schools,” Tateshvili said. “The pupils would have access to textbooks, but the teachers themselves often wouldn’t even know enough Georgian to teach everything that was in it.”

But change is slow to come. Ethnic Georgian Irakli Shainidze moved to Akhalkalaki from the Guria region eight years ago to take advantage of the thriving cross-border food trade. He uses Armenian or Russian to communicate with his customers.

“Obviously, being in Georgia, we prefer to speak in Georgian,” he said, “but the reality here is a bit different. I know enough Armenian to run the shop, but if I can’t say what I want to in Armenian, then I switch to Russian… only the children around here understand Georgian.”

Timothy Blauvelt, a professor at Tbilisi’s Ilia State University who studies post-Soviet linguistic politics, argued that there was little point focusing efforts to teach Georgian to an older generation. x

“In terms of language acquisition, I think that people past school-age are sort of a write off,” he said. “Change will be generational and it will come through schooling in Georgian. Given the fact that you can’t assimilate older populations, there is a real usefulness [of Russian].

Despite their efforts, Blauvelt said that the state had failed to use language as a means to integrate minorities.

“That’s been the stated aim of the Georgian government for at least the last 20 years, but they’ve fallen short for a number of reasons,” he continued.

“One of those is language difficulty. Here in Georgia it’s very different from the situation you have in Ukraine .... It’s not such a big ask to have a Russian speaker learn Ukrainian, and even if they don’t end up being fully bilingual, at least they can understand each other. Whereas here, Georgian and Armenian, for example, are from completely different language families - plus Georgian is extremely difficult to learn.”

“Perhaps the best success story is the Four Plus One programme, but that’s very specifically targeted and only covers a small number of people. A much bigger challenge is the question of who is going to teach Georgian in these small communities and what they’re going to teach with … the development of textbooks for teaching Georgian as a second language doesn’t have a huge history.”

He argued that people should not exaggerate the sensitivities around the use of the Russian language.

“Now there are clear historical reasons why there is a reluctance to give the Russian language any special status, but at the same time the deliberate exclusion of Russian seems to me like cutting your nose off to spite your face,” Blauvelt continued. “We shouldn’t let Russian be seen as the property of the Russian Federation any more than, say, English is the property of the English. We shouldn’t think that people who watch the news in Russian will be converted to Kremlin ideology – given that so many people know the language, Russian could be a great tool for the Georgian authorities to communicate their own information and values.”

Joseph Alexander Smith is a freelance multimedia journalist based in Tbilisi.

Giving Voice, Driving Change - from the Borderland to the Steppes
Georgia
Culture, Life
Connect with us