Swimming Out of Besieged Mariupol

How one man swam to safety by diving into icy sea water to escape the Russian siege. 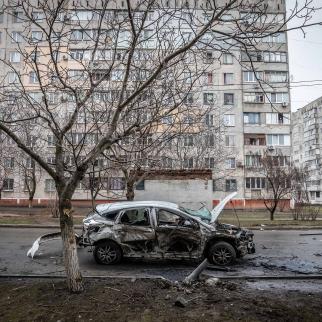 Under Siege in Mariupol

A family describes the “hell” of days under Russian bombardment without water, fuel or contact with the outside world.

Swimming Out of Besieged Mariupol

How one man swam to safety by diving into icy sea water to escape the Russian siege. 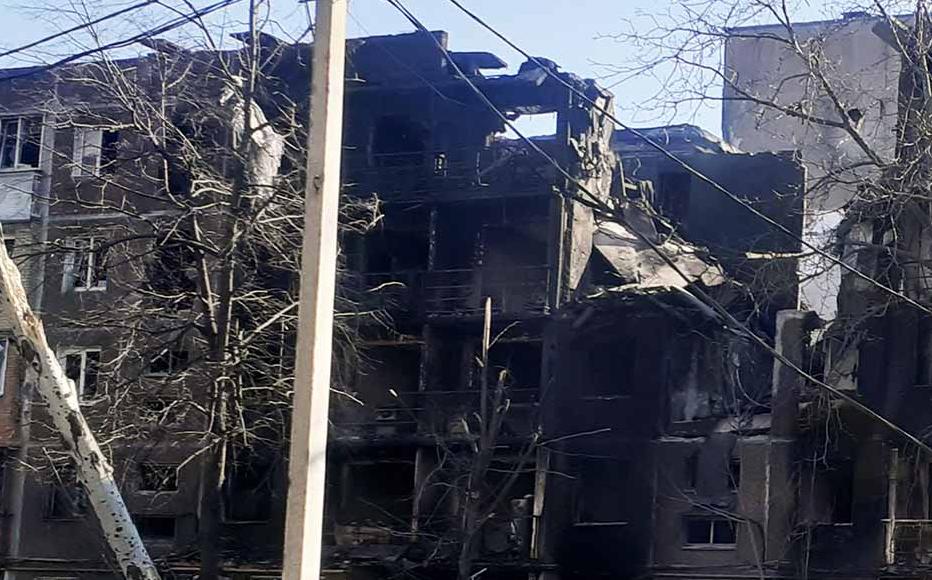 A shelled apartment building in Mariupol, 16 March 2022. © Wanderer777/Wikimedia
The link has been copied

Growing up in Mariupol, the once vibrant southern Ukraine port city, the sea was always an important part of Dmytro Yurin’s life. Little did he know that it would eventually save him.

“As a child, I dreamed of becoming a sea captain and even worked part-time in the port, selling cold beer to holidaymakers,” the 31-year-old told IWPR. Later on, he became a keen fisherman, sharing this hobby with his father, who died of Covid-19 in 2021.

“My father taught me how to fish,” Yurin continued. “I fished soiuy mullet, a sea fish, with him for 20 years. On one fishing trip, you could catch up to 50 kilogrammes of fish. We kept the best three kilos and sold the rest.”

He made a comfortable living an entrepreneur in the market, selling fruit and vegetables, and life in Mariupol went along easily.

Then on February 24 this year, Russia launched its full-scale invasion of Ukraine and the city of his childhood changed forever. Troops besieged the city of 400,000 people, leaving many trapped with no electricity, running water or fresh supplies of food.

“The shooting and the explosions began, people were dying behind my eyes,” he remembers. “One man's head was blown off by shrapnel.”

Not far from his home in the centre of Mariupol, 1,300 people were taking shelter in the city’s theatre. On March 16, Yurin’s 31st birthday, disaster struck.

“Russian aircraft launched an airstrike on the theatre,” he recalled. “I rushed there after the explosion to save the survivors. Adults and children screamed for help as I pulled people out of the rubble.”

Looking at the blood on his hands and the destruction around him, he knew he had to leave immediately. With Russian forces controlling access to the city, the sea was an unlikely escape route.

"When I came ashore, I fell to my knees, crossed myself and thanked the Lord for saving me.”

“My mother did not want to leave the flat despite the bombs, so she decided to stay,” he says. “Due to my passion for fishing, I had a wetsuit and special swimming gloves. I put on a normal tracksuit on top and took four empty five-litre plastic water bottles.”

As he feared severe cramps due to the freezing water, he also brought safety pins to prick his legs and keep them moving.

“I arrived at Pishchaniy Beach at 5pm. It was deserted. Even so, I went far away so that no one could see me. I took off my tracksuit and shoes, left them all on the shore and swam.”

Despite his love of the water, Yurin had never been a strong swimmer.

“When I was nine, I almost drowned in the sea when a girl jokingly pushed me off the pier on the city beach. Other holidaymakers saw that I was drowning and came to the rescue,” he recalled.

Supported by the empty plastic bottles he put under his chest and arms, Yurin started swimming.

“I swam four kilometres in frigid water with a temperature of 9-10 degrees Celsius. It took two hours and 40 minutes, the longest and most important swim of my life. When I came ashore in Melekine village [in the suburbs of Mariupol,] I fell to my knees, crossed myself and thanked the Lord for saving me.”

Frozen, exhausted and alone, he walked nearly a kilometre until he found a local family who helped him.

“An elderly woman invited me to her house, where her husband gave me his old trousers, shirt and jumper. They fed me borscht and also gave me 50 grammes of homemade pepper vodka to drink. They also found out about a car that took people out of the village towards Zaporizhzhya, which had a free place for me. From Zaporizhzhya I took the train to Lviv, which was safer. It was incredible, as someone was always helping me - and I didn't even get sick, despite swimming for so long in icy water.”

Yurin is grateful for the support he has found in Lviv, but like for many internally displaced life is hard.

“Now I live in a shelter in a school building. I have three friends from Donetsk region here with me: Artem, Kolya and Valera. When they heard how I escaped from Mariupol, they thought I was making it up at first. I was able to call my mother from Lviv to Mariupol. She was happy that I was alive, but unhappy when she found out that I got out of the city by swimming.”

Yurin left all his documents behind in Mariupol, which means he has had extra problems accessing work, accommodation and benefits. Housing is a serious problem. The school-turned-shelter needs to be ready for the new academic year and people need to relocate. Yurin has nowhere to go: no money to rent a place in Lviv, no option of returning to Mariupol, and no links in other safe cities.

“I turned to the police for help and I was advised to find a live-in job. But it is very difficult for a person without documents… without documents, I do not receive the subsidy for displaced person. I [only] have 300 hryvnias (about nine dollars) in my pocket.”

The only work he had managed to find was a temporary job as a loader at the wholesale market. “It pays 80 hryvnias (about 3 US dollars) per hour, but I need treatment for epilepsy. My pills cost 400 hryvnias (about 14 dollars) and last for ten days,” he said. “I will do anything to earn more.”