In a world still consumed by the pandemic, the classic role of the press remains as essential – and as under attack – as ever.

In a world still consumed by the pandemic, the classic role of the press remains as essential – and as under attack – as ever. 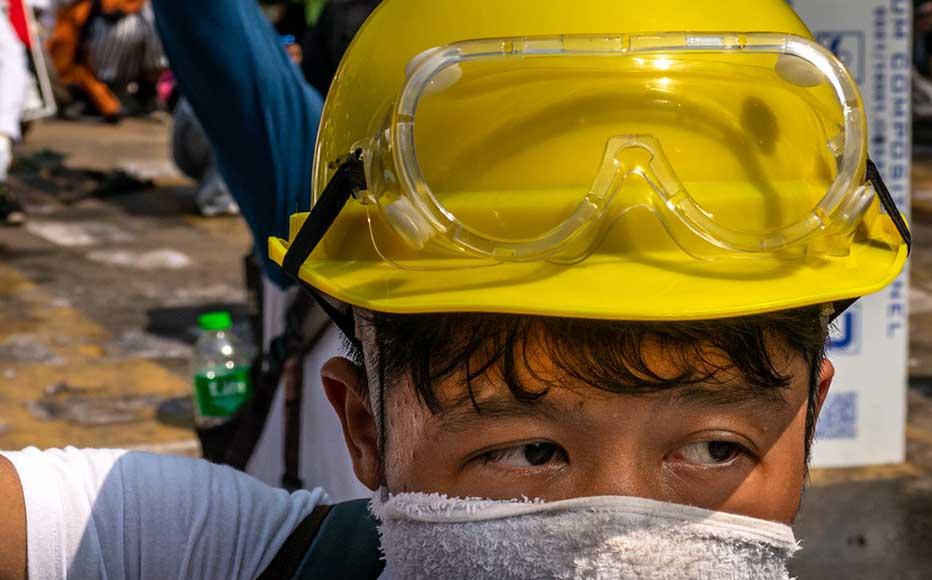 Anti-coup protesters prepare for a clash with riot police on March 02, 2021 in Yangon, Myanmar. Myanmar's military government has intensified a crackdown on protesters in recent days, using tear gas and live ammunition, charging at and arresting protesters and journalists. © Kola Sulaimon/AFP via Getty Images
The link has been copied

Getting the story out remains a risky endeavour. On World Press Freedom Day, IWPR recognises and celebrates those continuing to speak truth to power.

When the Myanmar military overthrew the government, security forces shut down national TV, radio, newspapers and – as our frontline report in this Spotlight shows – restricted access to the internet and even smartphones. As the coup completes its fourth month, according to the press monitoring group Reporting ASEAN, 77 journalists in Myanmar have been arrested, with 43 currently detained and arrest warrants pending for a further 22.

While China has imposed a ‘patriotism’ test on all political candidates in Hong Kong, the same is under way for the media. Controls have been tightened over the public broadcaster, independent outlets shuttered, and journalists and media owners – including Jimmy Lai, founder of Next Digital and Apple Daily – subject to arrest and imprisonment.

And as Covid-19 ravages India, hit by the worst second wave of the virus, the government focuses on censoring Twitter, compelling the removal of tweets from professional reporters and citizens revealing the reality of the country’s health disaster.

"The stakes could not be higher: for the individuals, for their communities, and for a world which against a deluge of lies above all needs honest information."

In a world still consumed by the pandemic, journalists have themselves been key workers – keeping populations informed, highlighting and combatting orchestrated disinformation campaigns and helping to connect populations shut in and fearful.

But as these examples from Myanmar, India and elsewhere show, the classic role of the press remains as essential – and as under attack – as ever: to hold governments to account, to shine a light on human rights violations, to give a platform to citizens in need.

In a rapidly evolving media and information landscape, the only certainty is of change, and the disruption caused by the digital transformation is profound: on finances, on quality and balance, on competition with other sources, from citizen journalism to official propaganda. Partisanship in the press is high, trust in the media low, and the future impact of unregulated and unregulatable social media platforms is unknown.

Yet all of this only underlines the courage of individual journalists to report the news. To have faith in the power of honest story-telling to make a difference. To represent people’s interests, give them a voice and drive positive change.

At IWPR, we celebrate reporters globally, especially local journalists committed to their communities, and juggling the fine balances of working – and living – in dangerous environments. The success of reporters and citizen journalists inside Myanmar to continue to report on the coup and share their information and images with international media around the world may be a new paradigm in crisis reporting. It is certainly a profile in bravery.

Around the world, in fact, local voices are making themselves heard. For every act of government repression, there is a resistance, and in this Spotlight we highlight many inspirational successes of people finding ways to make themselves heard.

People like Abjata Khalif, who runs a not-for-profit organisation in northern Kenya producing untold and under-reported stories in local languages for often extremely marginalised communities.  As part of an innovative “listening programme,” people in remote villages gather together to listen to solar powered radio or a package on a USB stick.

“People are kept abreast of the news, they listen and learn to see how they can replicate ideas from around the world into their own remote setting,” he said.

Or like Saeb Daoud, director of the Voice of Peace radio in Iraq’s Nineveh province, who is working to rebuild trust and unity among the area’s diverse religious and ethnic communities. Given the fierce backlash against the media’s attempts to hold government and officials to account, he said, “I’m not sure what the future will look like for freedom of the press.”

As always at this time of year, we commemorate our colleague Ammar al-Shahbandar, IWPR’s Iraq country director killed six years ago on the eve of World Press Freedom Day by an Islamic State bomb, as well as Iraqi reporter Sahar al-Haidari and other journalist colleagues who have lost their lives in service over the years.

The stakes could not be higher: for the individuals, for their communities, and for a world which against a deluge of lies above all needs honest information.

On World Press Freedom Day, support independent journalism. Take out a paying subscription to your preferred media. Give a donation to a media freedom or development group, including IWPR.

And make your own voice heard to government to lobby and respect press freedom for what it is: the working necessity of professional journalists, and a fundamental and essential right in open societies for us all.

Anthony Borden is executive director of the Institute for War & Peace Reporting.