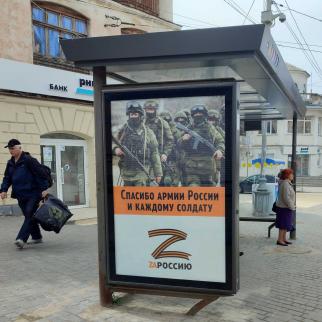 A poster near the memorial site Malakhov Kurgan reads “Thank you to the Russian army and each soldier – Z, for Russia”. © IWPR 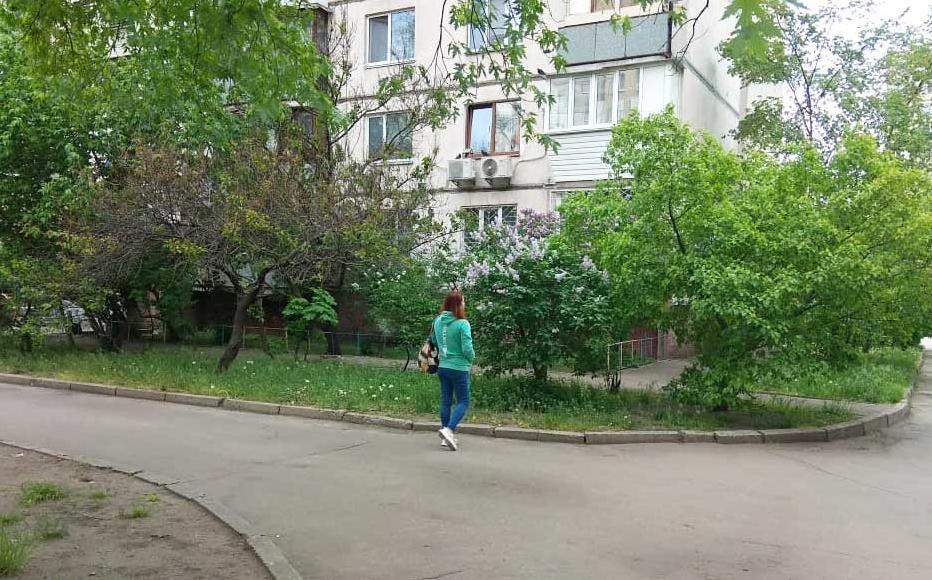 In 2014 Ekaterina moved to Kyiv from Luhansk, in eastern Ukraine. Her older sister, Iryna, stayed behind. When Ekaterina had to flee Ukraine's capital due to shelling Iryna did not believe her accounts about Russians bombing against civilians. © Piotr Garciu
The link has been copied

When bombs started raining on Kyiv, Ekaterina felt a deep sense of deja-vu. Each blast she heard and each blaze she saw from her flat on the ninth floor of a building in northern Kyiv reminded her of the shelling she had lived through in her native Luhansk. She had fled her hometown in eastern Ukraine in 2014 as the war began in Donbas, leaving behind her family and a different vision of the world.

After a week of sleepless nights, the 40-year-old decided to pack up her life, again. She and her 17-year-old son left for Moldova where Ekaterina has relatives.

Ekaterina had been speaking regularly to her older sister, Irina, who never left Luhansk. But the conversations became increasingly harder as Irina and other relatives did not believe her account of the war, refusing to accept that Russian troops were bombing residential buildings, schools and playgrounds.

“My sister texted me that Russia was finally going to liberate Ukraine from the Nazis and Bandera supporters,” Ekaterina told IWPR, referring to Stepan Bandera, the controversial nationalist leader who is revered as a hero by many Ukrainians for leading an anti-Soviet movement, and regarded as a Nazi by others for his collaboration with Germany during WWII. “She told me, ‘Don’t worry, they won’t touch the civilians. Be patient, we have been tolerating this for eight years, so you can do it too.’ She did not believe they were bombing civilians.”

Ekaterina and Irina were once close. Their mother died when they were little girls and they were raised by their father, who served on a nuclear submarine during the USSR. He also died a few years ago.

But following the full-scale invasion the sisters became more distant, until they stopped talking entirely. A Happy Easter note was the last exchange.

This alienation has become a common consequence of Russia’s invasion of Ukraine. Many Ukrainians have families across the border in Russia or in the so-called Donetsk People’s Republic (DPR) and Luhansk People’s Republic (LPR), which have been at war with Ukraine’s central government since 2014. Their understanding of the war is different.

Ekaterina, who has since returned to Kyiv after several months in Moldova, said that it was down to the stories told by the tightly-controlled Russian media.

“I think that media brainwash people there,” she continued. “They see the situation differently. People feel offended that no one remembered them for eight years and now everyone feels sorry for Ukraine.”

When Ekaterina tried to tell her sister in Luhansk what was really happening across Ukraine, she hit a dead end.

“They do not accept any other information, so it makes no sense to send her any photos or videos of murdered civilians and destroyed buildings. They say that the Ukrainian Nazis are killing their own people,” she said.

Irina’s views are indeed different. Talking to IWPR from Moscow, where she moved in March for work, the 47-year-old argued that Russia was trying to end the conflict that has been raging in the east since 2014. She blamed the West for supplying weapons to Ukraine and making the war drag war on.

“People in Donbas were waiting for Russia to recognise our republics,” she told IWPR. “Some people are vindictively glad that finally the rest of Ukraine could feel what we have been through all these eight years. Most, however, are sorry, because war is terrifying, and you don’t wish for anyone to experience it. They feel sorry for the civilians who live in this hellish meat grinder. I am sorry for the soldiers of the armed forces of Ukraine, who are unwillingly taking part in this.”

In Luhansk, tension had been high ahead of the invasion, Irina recalled.

“We did not know what to expect. The local authorities did more to spread panic than to calm citizens. People were advised to pack emergency bags. We were regularly sent text messages to evacuate. Many fled, but returned few weeks later, when it was clear that the city would not be bombed the same way as in 2014,” Irina explained, adding that the city was calm, although many men had gone into hiding after the authorities announced a general mobilisation.

Ekaterina said that she had tried to come to terms with the polarisation with her family and friends in Luhansk.

"Moving to Kyiv was not easy for me. But friends helped me, I found a good job and Kyiv became my second home. I love this city. My relatives reacted differently to the move, some were happy as they believed it would be calmer for me and my son. Others considered it a betrayal,” she explained, adding how she missed her city and wished to rewind time to 2013 when Ukraine was a peaceful country. “Through all these years though we communicated normally, I helped my father and sister as much as possible. I went a few times to Lugansk and my relatives also came here."

Eight years ago, Irina was not ready to follow her sister’s steps and since then sisters’ paths have steadily diverged.

"I had a stable job. It felt too risky to go somewhere with my ten-year-old child,” Irina said. “And I hoped that the war would end quickly, we would become part of Russia, and everything would be fine.” Her daughter, now 18, decided to remain in Luhansk and not follow her mother to Moscow.

Irina said that it was hard to talk about her relationship with Ekaterina.

“It’s all too painful. Perhaps [Ekaterina] was upset that I didn’t react properly and that I didn’t feel sorry for her in the first days of the war at the end of February,” Irina said, adding she remained worried about her younger sister.

“Andrey [Ekaterina’s son], he is almost of conscription age, and I was afraid that he might be enlisted in the army. I know that on both sides untrained children were simply being used as cannon fodder,” she continued.

The different understanding of the war influences also the sisters’ view of the future of their relationship. Irina is optimistic, Ekaterina less so.

“Sooner or later the war will end, and life will go on,” Irina said. “I am sure that we will be able to restore communication with Ukrainians, because we have common concerns. Almost every family living in Donbas has relatives or friends on the other side; many of them have not seen each other for years.”

Ekaterina is not so sure.

“I think I will communicate with my sister again, but the disagreement about the war will always remain between us,” she said. “She has her own attitude and I have mine. Our relationship will not be the same.