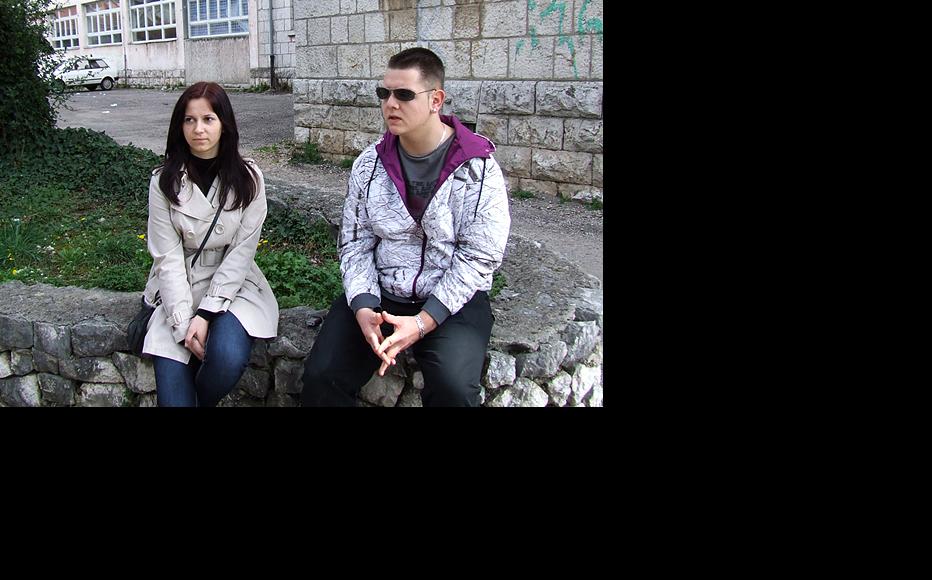 Students Nives Raguz and Edvin Burina in front of their high school in Stolac. (Photo: IWPR) 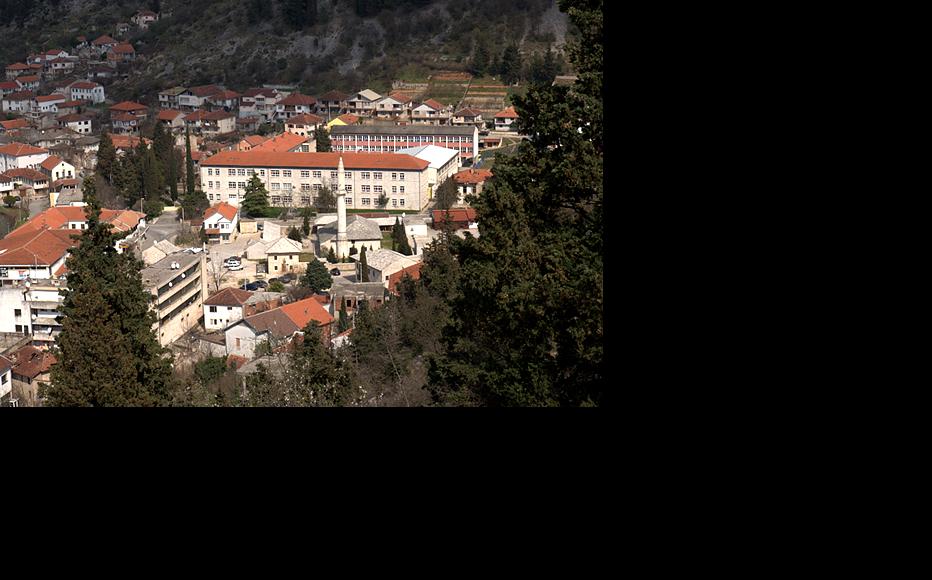 View of Stolac with the high school in the background. (Photo: IWPR)
The link has been copied

They’re final year students at the same high school in Stolac, south-east Bosnia - but the two friends rarely have a chance to chat on the premises.

Edvin Burina attends class with other Bosniaks in the morning and Nives Raguz, a Croat, does so with her ethnic kin in the afternoon.

There’s a 45-minute break between the two shifts which means there are limited opportunities for students of Bosniak and Croat origin to socialise.

Its one of 50 schools around Bosnia who operate what’s called a “two schools under one roof” system, where children of different ethnicity – mostly Croats and Bosniaks – attend the same school but have separate lessons.

The system was introduced a decade ago by the international community in Bosnia in order to encourage children of returnees in areas in which they were minority to attend school and mix with children from the majority ethnic group.

However, this temporary solution has in time become permanent and turned into a form of segregation because such schools often have separate entrances and shifts for children of different ethnicities, which prevents them from having contact with each other.

Some schools even built walls and schoolyard fences to physically separate Bosniak and Croat children who attend classes in the same shift.

These institutions also have segregated school boards and administrations who rarely communicate with each other.

The majority of the schools are located in south-east and central Bosnia and they exist only in the Bosniak and Croat dominated Federation, because schools in Bosnia's smaller entity, Republika Srpska, do not accommodate the needs of minority pupils.

“Having the ’two schools under one roof’ system is a form of apartheid and one of the biggest shames of the Bosnian society today,” said newly-appointed federal education minister Damir Masic, in an interview for the local newspaper San at the beginning of April.

“Our ministry is determined to put an end to this discriminatory policy and separation of children based on their ethnic background,” he added.

But Bosnian Croat member of the state parliament, Ivo Miro Jovic, doesn't see anything wrong with this system. He told the local media in January he was aware that most of these schools were located in the Croat- majority areas of Bosnia, but pointed out that these schools should not be blamed for the divisions in Bosnian society.

“The divisions don't start at school, but at home. We are being raised differently from the day we are born. A man is what he is - he is being raised by his family who instil in him a sense of belonging to his community. That should not insult anyone, just as different curricula for Bosniak and Croat children should not be a problem to anyone,” he said.

At the moment, three different curricula are used in Bosnia – one in RS, one in Bosniak- majority areas of the Federation, and one in Croat-dominated parts. The students use different textbooks for the so-called national group of subjects, such as geography, history, religion and language.

These curricula have been used as an excuse for the local authorities in ethnically-mixed communities to continue with the segregation of children - although they claim this is the only way of protecting the children's right to study in accordance with the chosen curricula.

“Our society is segregated…and education is largely to blame for this situation. If we want a brighter future, we have to change our education system to a great extent,” Bosnian author and journalist Nenad Velickovic told IWPR.

Despite the segregation of Croat and Bosniak children at their school in Stolac, Nives and Edvin do meet – but outside classroom hours. They take part in a couple of projects aimed at bringing the three education systems closer together and establishing better inter-ethnic relations among people in Stolac.

One of these projects is a brass band, set up by the Nansen Dialogue Centre, NDC, from Mostar. Nives and Edvin both play in this band and apparently enjoy it a lot.

“The band numbers around 50 people of all ages, sexes and nationalities and it represents the only organisation in Stolac in which nationality and religious affiliation do not matter. All we care about is playing and socialising,” Edvin said.

According to Nives, who’s been playing in the band for four years, its members couldn’t care less about each other’s nationality - all they’re concerned about is the music they play.

“We get along very well and I think we should serve as an example to others who are now facing the problems we were having at the beginning,” she said.

The brass band is part of a long-term NDC project aimed at tackling the segregation at Stolac high school through various joint activities - such as a school magazine, ecology projects and sports – in which 150 students take part.

Vernes Voloder, project coordinator at NDC Mostar, says the organisation’s efforts - including their work with school management, teachers, parents and the local authorities - have changed the situation in Stolac significantly.

“We have not come here to change things overnight or forcefully. We have managed to make relations between the two ethnic groups at this school more relaxed. There is much more positive dialogue, understanding and tolerance today than several years ago,” Voloder said.

However, Nives warns that the situation in Stolac is still far from ideal and a lot more has to be done in order to help reconciliation and establish trust between older generations of Bosniaks and Croats in Stolac.

“My father is a lawyer and, of course, he works with people from both ethnic groups. My parents say they have no problem with me socialising with Bosniaks, but they are always telling me that one should stay on their own turf. They also say I should be kind to everybody, but only to a certain extent,” she said.

Pero Prkacin, a former member of the parents’ council at Stolac’s high school, claims the reconciliation process in this town is moving forward.

“The situation today is far better than it used to be. Children are socialising, spending time together and everything is moving in a good direction. I welcome these joint activities. You see, I work in the catering business and, honestly, when there are no inter-ethnic tensions, I have much more work,” he said.

The Abrasevic Youth Cultural Centre is located right on Mostar’s former front line, which separated Bosniak and Croat forces during the 1992-95 war. Traces of the fighting are still very visible here.

Discussing the school segregation issue which is also evident in Mostar, Robert Jandric from the Abrasevic centre points to a spot where a trench was once located, just a few metres from his current office.

“We are not on the opposite sides of this trench any more, but we are still very much divided as a society and that’s reflected in our education system as well,” he said.

“I find it incredible that we are all honestly disgusted by racial discrimination which existed in America in the past, but we consider the ethnic segregation in our country as something completely normal.

“That's one of the biggest problems in our society today and it could be solved if a law on higher education were passed at a state level, but I don't think this will happen any time soon.”

However, there are some encouraging signs that pupils themselves might try to bring about changes to the current discriminatory education system.

In the central Bosnian town of Busovaca, Bosniaks and Croats attend the local high school in different shifts, but they are gradually raising their voice against separation.

In February this year, these students participated in a project called We Are Stronger Together, aimed at ending school divisions.

As part of this project, the students took part in round-table discussions about segregation and expressed their views on this subject. They also went to a short trip together and composed a song against separation, which is broadcast regularly on Radio Busovaca.

“Projects like this one have nothing to do with politics, but aim merely at bringing children together, help them to socialise and overcome stereotypes and prejudice,” said Esmir Omanovic, a third-year student at Busovaca high school, who participated in the project.

Adim Hodzic, director of the Bosniak administration of the Busovaca school (Croats have their own management), expressed his full support for student activities focused on establishing good relations between the two ethnic groups.

“Even thinking about stopping such activities would be crazy,” he said.

However, the director of the Croat administration of the school, Dragica Štrbac, refused to comment on the matter, saying that she didn’t want any media attention and that “the children should be left alone”.

Observers warn that segregated communities are a catalyst for future instability. They say that having schools countrywide that separate their students could result in generations of young people who lack a vision of a shared future.

“Our ministry will put strong pressure on local authorities to stop segregation in schools,” said federal education minister Masic. “We will financially support projects aimed at ending the two schools under one roof system because a unified education system is in the interest of all citizens of Bosnia. Our goal is a high quality education and that’s something the children attending segregated schools will never be able to receive.”

Ajdin Kamber is an IWPR-trained reporter in Sarajevo. Mirza Ajnadzic from Sarajevo contributed to this report.

This article was produced as part of IWPR’s Tales of Transition project funded by the Dutch government.

Bosnia and Herzegovina: Tales of Transition
Balkans
Connect with us