Fighting between Armenia and Azerbaijan has affected thousands of children’s right to learn. 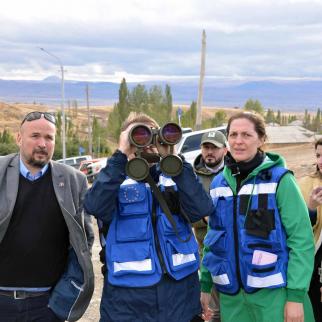 On October 18, a delegation of the European Union Technical Assessment Mission visited the settlements of Vardenis, near the border with Azerbaijan. The communities came under shelling during a new fighting outbreak in mid-September. The EU foreign ministers agreed to send a short-term observation mission to work on the border. © Karen Sargsyan

Fighting between Armenia and Azerbaijan has affected thousands of children’s right to learn.

On September 13, Meline Gevorgyan grabbed her daughters of three, six and thirteen and fled her house in Sotk, a village in Armenia’s central-eastern province of Gegharkunik.

Azerbaijani forces had launched an attack along a broad swathe of border areas within Armenia, in what quickly became the most serious combat operation since the end of the 2020 war over the Nagorny Karabakh region. Artillery and drone fire hit 36 settlements, including Sotk. Over two days over 7,600 people were evacuated and Yerevan’s tally was nearly 200 dead, about 300 injured and 28 servicemen missing.

“Anahit, our 13-year-old oldest is still afraid, of course she is, we are all afraid: what we had to endure with the children that day would be hard to forget,” 38-year-old Gevorgyan told IWPR. “I don’t even know how we will return and continue to live in the village.”

The violence also meant Gevorgyan’s daughters had to leave kindergarten and pre-school, like many others in the area. According to deputy minister of education Zhanna Andreasyan, the renewed military escalation affected about 6,000 preschool and 25,000 school-age children.

After Gevorgyan’s family moved in with relatives, her two oldest girls switched to online classes, like many children living in border villages in the provinces of Gegharkunik, Vayots Dzor and Syunik. Armenia’s ministry of education has granted schools near the border the right to take a break if necessary and make up for the missed classes later.

Learning online has been common practice since 2020, and not only due to the pandemic.

“During the war in 2020, we switched to distance learning from the very first days in all borderline settlements where there were security issues. We provided these schools with the necessary equipment so that online classes can be properly organised,” Andreasyan said.

Shelling damaged at least two schools in the villages of Sotk and Ayrk.

“The fact that schools were shelled is extremely alarming… I think that this is a violation of all possible conventions and norms of international law,” Andreasyan said.

“This is what I feared…what happened on September 13 was just appalling. We sent away the children, all of them. There were no children in the village for almost two weeks, classes were held remotely,” Davtyan told IWPR. “As things calmed down, they returned to the village. The psychological tension however persists; it was not the first time the children heard gunshots, but this time the school was shelled.”

Sotk was also hit hard by the escalation, with 150 houses damaged and 60 completely destroyed.

Kristine Begyan and her family moved to an apartment further away from the border in Vardenis, about 15 kilometres west of Sotk.

“I have a ten-year-old child who studies online. We are not thinking about transferring to another school yet, we are waiting for everything to settle down, we stay in touch with the teachers,” she told IWPR.

Hakob Avetyan was one of the first of Sotk’s some 800 residents to return; about 70 per cent left in the wake of the fighting.

“Some want to send away their children again, the threat is high. Who can guarantee that what happened on September 13 will not happen again?” Avetyan told IWPR, adding that gunshots are not uncommon at night. “The border is so close that people even wake up from these sounds.”

The head of the village administration, Sevak Khachatryan, told IWPR that the government had approved a programme which includes the construction of a local shelter next year. He said that 160 children study at the Sotk school, and 30 go to kindergarten.

“Who would have imagined such a large-scale shelling [inside Armenia], targeting schools, civilians and houses?” he said. “Thank God, everything is under control now. Residents are restoring their houses, installing windows, repairing roofs and terraces. People are slowly returning.”

“All 30 teachers, including me, have become psychotherapists; each student needs a specific approach, we know what our children had gone through,” Artak Melkonyan, the principal of Sotk’s secondary school, told IWPR, adding that the village’s children had grown up with the sound of shooting.

“We have prepared our students for any situation, we have followed all the rules of civil defence. The children of those families who returned to the village are attending the classes at school, but those who did not return, take classes online. We do everything to ensure that no one falls behind.”

The constant feeling of insecurity hampers the ability to learn, experts note.

“Feeling unsafe makes anything else less relevant,” Serob Khachatryan, an education management academic at Yerevan State university, told IWPR. “If children are afraid, naturally they don't care about chemistry or geography classes. Schools have largely reopened, but…there are limitations in playing or other activities outdoors. Everything is kept at the bare minimum. It is a violation not only of the right to education, but also of the right to freedom of movement.”

He maintains that each school should have a shelter to guarantee safety and continuous learning.

Gayane Abrahamyan, who leads the For Equal Rights education NGO told IWPR that “meetings with teachers and parents [showed] that children have difficulties of concentration and attention, which can be a consequence of fear”.

Armenia’s Human Rights Defender reported the impact of the fighting on the civilian population, including on educational institutions. Anahit Khachatryan, head of children’s rights protection in the ombudsman’s office, told IWPR that the fighting “deprived hundreds of children of the right to education. We recorded serious violations of the Convention on the Rights of the Child and the Geneva Convention”.

While taking children to safety is a natural instinct, it has repercussions on the regions’ demography as well.

“Most villages [along the border] are small, so with each student leaving classes shrink, affecting the educational process…Students lose opportunities to socialise, [which] is very important in the education system,” Khachatryan explained. “Migration is also a trauma for those who stay in the village, because these children got used to each other within the years. And those who leave go through the stress of adapting to a new school, a new community, a new environment.”

In Sotk, however, residents want to stay.

“There is anxiety, but there is no fear, this is our village, our home, our homeland, we live here and are not going to leave our place,” Melkonyan said. “Our children are strong. We have resumed classes and are moving forward with optimism; we can’t leave this village to strangers.”