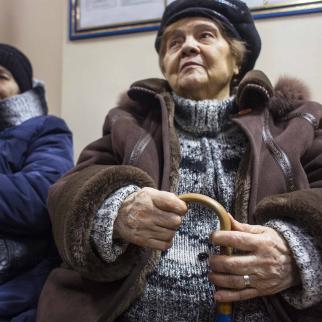 Residents of remote villages in eastern Ukraine queue to register and access their pensions in the city of Volnovakha. © UNHCR Ukraine

Kyiv is facing a challenge to fulfil its legal and social obligations to those living in areas controlled by Russia. 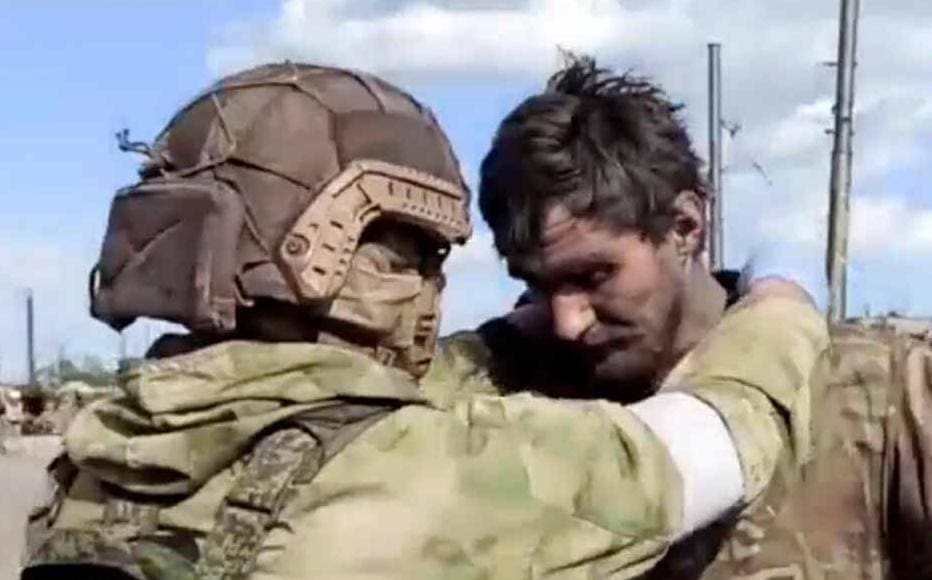 The UN human rights office is “very concerned” about plans by Russian proxies in the Donetsk region to put Ukrainian prisoners of war on trial. Images have emerged of metal cages being set up in a hall in Mariupol for what the de facto administrations have described as an international tribunal. Kyiv-based human rights defender Valentyna Telychenko told IWPR’s Svitlana Morenets that such processes had no legal basis and could even be considered a war crime.

IWPR: Can the trial of Ukrainian prisoners of war in the occupied territories be considered legitimate?

Telychenko: Any show trial of captured Ukrainian military personnel cannot be considered legitimate. The occupied territories are not a state. There is no legal court whose sentences can be considered fair according to national and international standards and that will be recognised.

The so-called Donetsk People’s Republic and Luhansk People’s Republic are illegal entities. They have no authority to create courts, appoint judges and require them to issue sentences. [The self-proclaimed DPR and LPR are only recognised by Russia, Syria and North Korea, as well as Georgia’s breakaway regions of Abkhazia and South Ossetia].

It doesn't matter who or what is brought from the Russian Federation: the demonstrative trial of the prisoners of war in the occupied territories will never be legal.

What are the main features of a legitimate court in Ukraine during martial law?

Even if some Ukrainian regions are temporarily occupied, courts there may still function, but only in accordance with Ukrainian law. This means following court procedures, conducting proceedings by authorised persons, as well as the fact that the place of an open hearing must be determined by the relevant Ukraine’s legal regulations, if there is no legal basis for holding a closed-door trial.

A court and prosecution can be legal only if it is based on Ukrainian law and doesn’t violate any Ukrainian law.

Does Russia have the right to move Ukrainian prisoners of war to Russian territory and hold trials there?

Ukrainian prisoners of war can be transported to the Russian Federation. But it is important to note that they must be provided with proper conditions and treated as humans. Torture is unacceptable. The execution that took place in Olenivka against Ukrainian soldiers, who were prisoners of war, is unacceptable too, and violates the 1949 Geneva Conventions. Also, Ukrainian prisoners of war must be provided with the possibility of communication, at the very least with their relatives and Ukrainian representatives - in an ideal case, also with international human rights defenders and organisations that help to monitor fair trials. Willfully depriving a prisoner of war the right to a fair trial qualifies as a war crime, as prisoners of war are entitled to protection under the Geneva Convention.

One key element is that the Russian Federation could prosecute Ukrainian prisoners of war only if they committed war crimes. If they didn’t commit war crimes, they have combatant immunity [which bars prosecution for mere participation in hostilities]. This should be one of the charges against Russia when an international tribunal considers the case of the Russian full-scale invasion.

Why would Russia need a trial of Ukrainian prisoners of war in Mariupol?

In August, the Russian supreme court declared Azov a terrorist organisation and banned its activities in Russia. [A unit of Ukraine's national guard, the Azov regiment defended Mariupol during the siege April-May; those who survived are currently among Russia’s prisoners of war].

Under Russian law, its members are considered terrorists, are criminally liable and can be sentenced to life imprisonment without the right to pardon or exchange. Moreover, on the territory of the so-called DPR and LPR Azov fighters could face the death penalty.

The Russian Federation is rushing a trial of Ukrainian prisoners of war in Mariupol for propaganda. They want to show that the Ukrainian military allegedly committed crimes against civilians, especially when we talk about the Azov regiment. There are already references to falsified evidence of such ‘war crimes, committed by Ukrainian soldiers’ from Russian government agencies.

I am also of the opinion that the Russian Federation is trying to legitimise its refusal to exchange Azov servicemen for Russian prisoners of war, which is what the Ukrainian government and society have been asking for.

How can Ukraine bring back the Ukrainian soldiers illegally convicted by Russia?

Negotiations with the Russian Federation do not work. Economic sanctions and other restrictions are putting pressure, for example a travel ban for Russians to the EU is currently being discussed, alongside sanctions against family members of Russia's top state officials.

We should not wait while the Russian Federation holds these fake trials that do not meet any judicial standard and are not in line with any law. Ukraine has to start working now, because its prisoners of war are being tortured and executed every day. Every wasted day costs the lives of our defenders.

Saving the lives of Azov servicemen and all other Ukrainian military and civilian prisoners of war, and the prevention of reprisals should be the priority of all international law and order institutions. All possible channels should be used to deliver a message to the Kremlin about the need to preserve their lives and return the Azovstal servicemen to Ukraine. Diplomatic channels are vital now, and the Ukrainian government and NGOs are currently working on it.