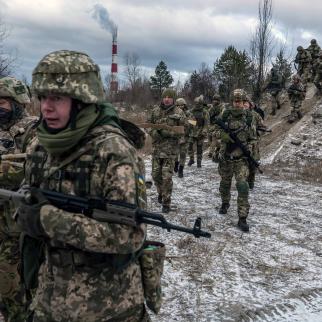 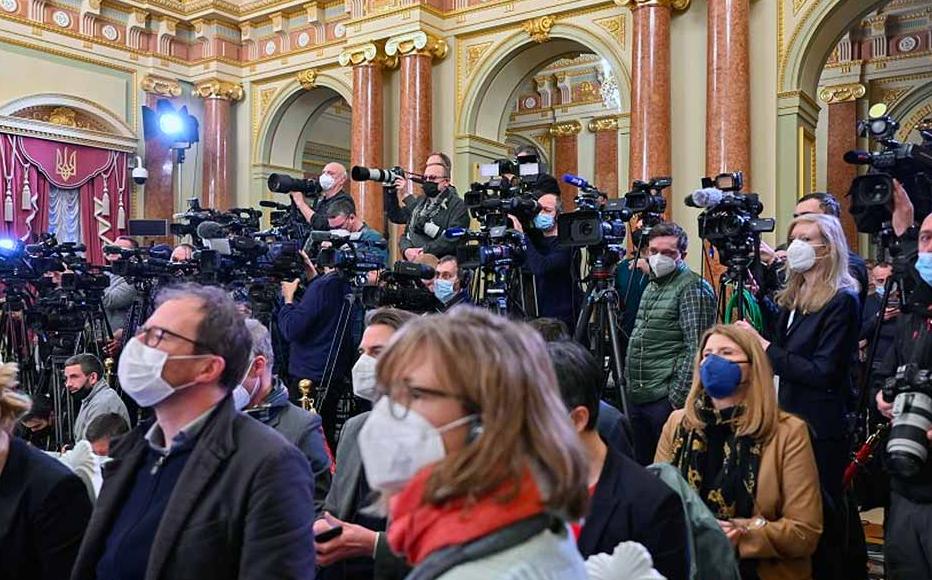 Members of the media covering the press conference following the meeting of the President of Ukraine with the Federal Chancellor of Germany. © Press Service of the Ukrainian President
The link has been copied

Ukraine has hit the headlines around the world in recent weeks as outlets rush to report on the Russian troop build-up on its borders and potential consequences. At a time when disinformation plays an integral role in conflict, accurate and fair reporting is more important than ever. Nataliya Gumenyuk, a Ukrainian journalist specialising in international security and conflict reporting, looks at how both domestic and world media are approaching current events - and how they could do better.

IWPR: How would you characterise the international reporting on the current crisis in Ukraine?

Nataliya Gumenyuk: To give credit where it’s due, we do appreciate the interest from the foreign media to report on the threat Ukraine is facing today. But I myself, a foreign reporter who covered other conflicts, am in general critical of parachute journalism, a foreign reporting cliché with a very binary approach.

For instance, I’ve just heard from a Ukrainian journalist who works as a producer and so met a lot of international TV outlets and it’s clear they know so little about our situation. When they travel to the Donbas, close to the conflict line, they imagine they will find refugee camps and crying children in the streets and broken houses, a situation something like the Syrian civil war. But the towns there look just uas sual, while the capital Kyiv looks like any European city. We are not a rich country, but the usual cliches of war aren’t there.

There is a lot of good journalism that has become more nuanced than over the last eight years, but Ukrainians have also put a lot of effort in to explaining that this war is actually happening. In fact, in the first years we wasted a lot of time explaining simple facts, such as that Crimea was indeed occupied by Russia, even two years after it happened. We bear the burden of past American wars, but this is not Vietnam or Iraq. People now understand better but there could be more understanding that Russia is an authoritarian and corrupt state and Ukrainians want democracy and pluralism.

As for the Ukrainian media, there have been numerous discussions amongst media professionals here about how we can report without creating panic. We are trying to be more constructive. For instance, there are more stories about preparations for war, what the government is doing, asking questions of the authorities. How are the Ukrainian media handling the challenges of reporting at this sensitive time?

I did not have high expectations, but so far our media has got it better than I expected. First of all they needed to play catch up, as until early January the big stories here were about domestic political battles; then people started to treat the situation more seriously. Ukraine has a variety of media, some owned by oligarchs with their own political affiliations. The independent media can also be partisan, so it’s a very complex environment.

"People in the occupied territories have almost no presence in the media."

The Ukrainian media is also preparing technically. The public broadcasters are working on some protocols on how to operate in the worst case scenario. People are sourcing bulletproof jackets, helmets, medical kits, working out how to manage in situations if there is a lack of internet, such as preparing satellite phones. The phase of active war was back in 2014-2015, so younger reporters have little experience and are not properly trained to cover conflict.

Every society looks at their last war to understand current conflict. For Ukraine, that was World War II. It’s the only reference we have - Ukraine didn’t have the wars of the early 1990s - and it’s very black and white, an old fashioned war. I’ve met international reporters who have covered the Balkans, the middle east, and they see the complexity of the situation.

What particular challenges do the Ukrainian media face in reporting this conflict?

My concern is there is no thoughtful examination of what peacebuilding involves – conflict resolution, transitional justice. We need to start a more complex discussion over issues like the Minsk agreement because people don’t really understand it. There is also a level of self-censorship amongst media professionals.

We need to reach out, make more effort. For instance, in the last year I pushed to do two stories on the impact of Covid in the occupied territories, but this was the only coverage I saw. Crimea is a bit different, it’s not sensitive, much simpler. Crimea oddly enough is more regulated because it’s ruled by the Russian authorities, not warlords, so it’s safer and easier to travel there, although people there are also concerned about how they would be portrayed.

What has the effect of such a long-running conflict been on freedom of speech and media in Ukraine?

War in the long run creates trauma and the conflict is toxic for Ukrainian society. If it’s frozen, or at least only simmering, the rest of the country can pretend it’s ok. The status quo has been normalised, the talks stalled.

War creates self-censorship, and journalists are cautious about fuelling propaganda and disinformation and are afraid how negative or critical stories could be used by Russia. There is also a danger that the war can be an excuse for lack of progress in other areas, such as gender equality.

Fortunately Ukraine remains pluralistic and moderate, surveys show that people are basically tolerant, although more hawkish voices can be loud.

This is a dovish government. Zelensky came in on a platform for peace and has been criticised for being too soft, wanting dialogue and to deal with the Russians. His calls for calm have been criticised by the opposition – but we do have a very strong opposition, and this is good for freedom of speech.

Nataliya Gumenyuk  is the founder of the Public Interest Journalism Lab.