Families remain in the dark as no international organisations have been granted access to the prison in eastern Ukraine where at least 53 people were killed.

Families remain in the dark as no international organisations have been granted access to the prison in eastern Ukraine where at least 53 people were killed. 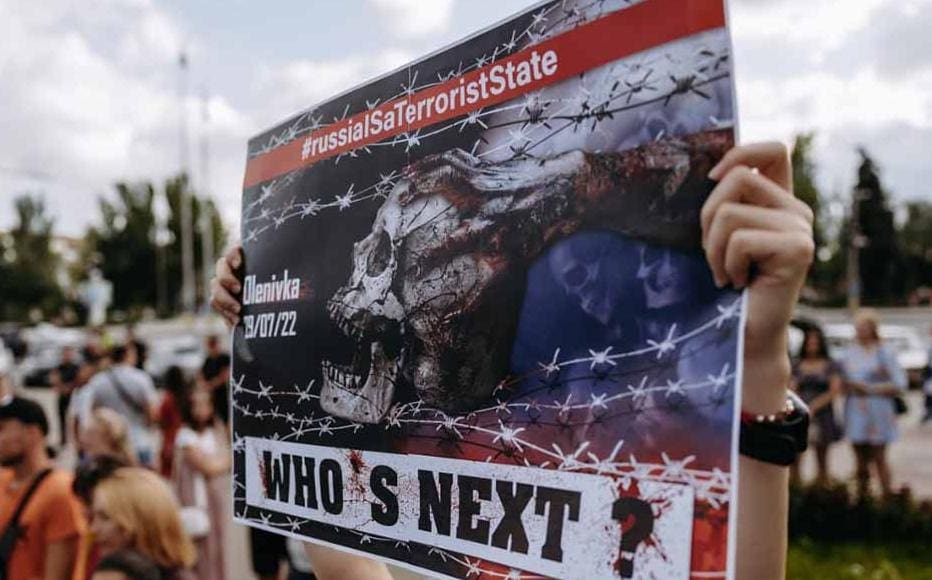 Olesia Nikolaienko holds a sign "Who's Next?" during a street protest in Zaporizhia on August 3 where hundreds of people called for accountability for Olenivka. An explosion in the prison facility in the eastern town killed at least 53 Ukrainian prisoners of war on July 29. © Photo courtesy of Olesia Nikolaienko 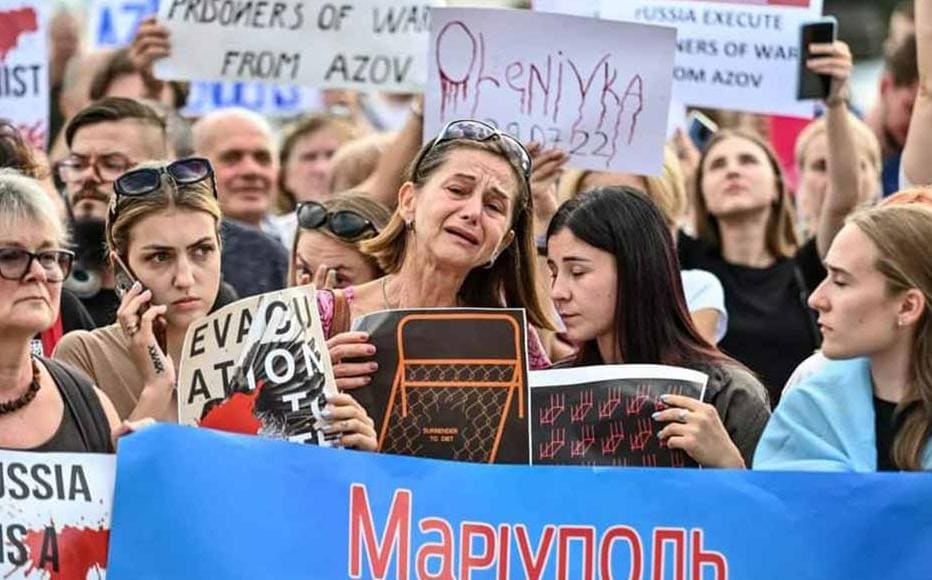 Relatives of prisoners of war call for news about the fate of those believed to be held in the prison colony in Olenivka in Zaporizhia on August 3. There are no official lists of the dead and the wounded and no international humanitarian organisation has been granted access to the facility. © Dmytro Smolenko 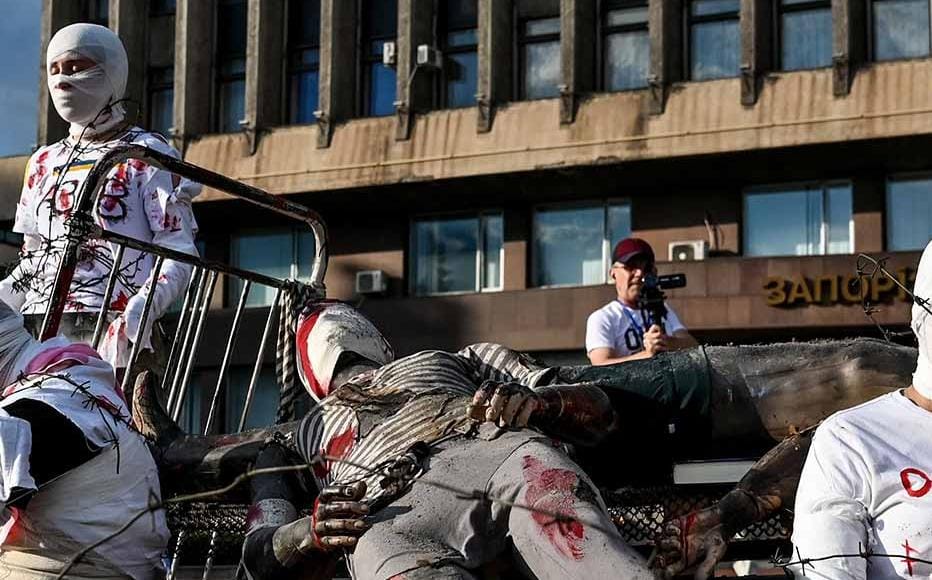 Activists in Zaporizhia during a street protest denouncing the explosion in the prison facility in Olenivka as a war crime. © Dmytro Smolenko 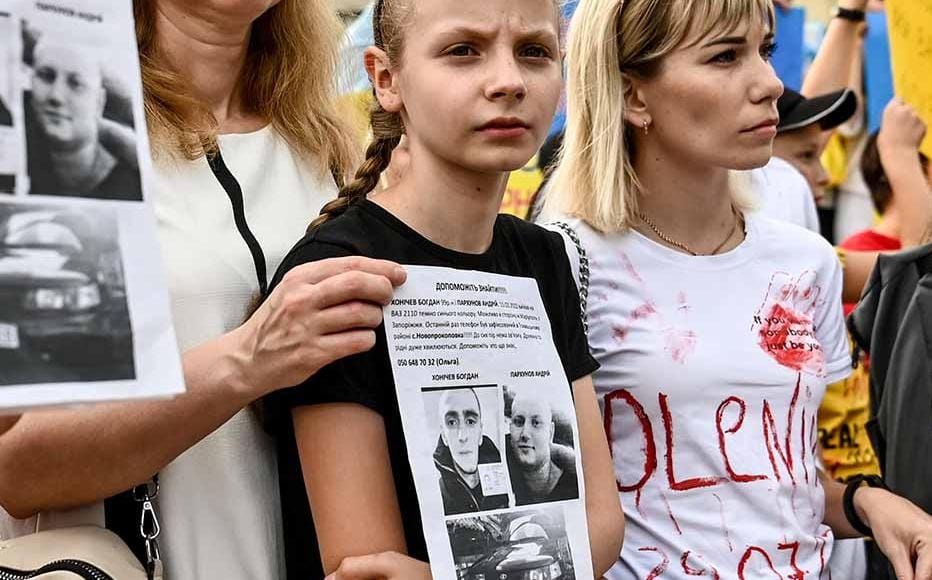 Many Ukrainian fighters were transferred tot he prison in Olenivka after Russian took control of Azovstal, the steel plant in Mariupol where thousands of fighters and civilians sheltered for weeks until May 16. © Dmytro Smolenko
The link has been copied

Thousands of Ukrainians have taken to the streets across the country demanding answers about the fate of prisoners of war held in the penal facility of Olenivka, where at least 53 prisoners died in a devastating July 29 explosion.

Holding a poster reading Who’s Next during a demonstration in Zaporizhzhya on August 3, Olesia Nikolaienko was desperately looking for news about her husband Volodymyr, one of the 2,500 Ukrainian soldiers captured at the end of May after defending the eastern port city of Mariupol for 86 days.

Russian forces have shared a list of the names of the dead and wounded, but Nikolaienko, an English teacher, did not trust them.

"There is still no official confirmation of these lists, and we are used to the fact that Russians cannot be trusted… The fact that my husband is not on the lists of the dead does not mean anything, these lists are not proof for me,” she told IWPR.

The last text message she received from her husband, a member of the Azov Regiment, read, "I am on the [evacuation] lists of the Red Cross and the UN. I hope they won't kill me.”

At least 53 POWs were killed and over 70 were wounded in the prison about 20 kilometres from the city of Donetsk, in occupied eastern Ukraine.

Amid global outcry and accusation, relatives of those held in Olenivka remain desperate for news.

“There are still no official lists of the dead and wounded,” Dmytro Lubinets, the recently appointed Ukrainian parliamentary commissioner for human rights, told IWPR. "Neither the Red Cross nor any other organisation is allowed to go into Olenivka.

Kyiv called it a war crime, stating that Russian artillery hit the prison to hide the torture of those held there, including fighters from the Azov Regiment who surrendered to Russian forces in Mariupol in May. Russian-backed separatists claimed Kyiv deliberately targeted the facility with US-made HIMARS rockets to deter defectors.

"We have not received a response to official requests regarding access to [the facility], we are ready to go there at any time," Lubinets stated. “ICRC has already formed a team… but the Russian side has not provided any legal response regarding ICRC access."

Mounting evidence indicates that Russian forces were behind the blast as satellite and other site images showed that the explosion was the result of either a precision strike or an internally planted incendiary or explosive.

US sources reported that no traces of US-provided precision weapons were found at the site.

UN secretary general Antonio Guterres announced a fact-finding mission to Olenivka, but the team has not been formed and the mandate has not been determined.

On August 2, the ICRC released a statement highlighting its request to access the penal facility, its readiness to deploy a medical and forensic team to the colony and its offer to support the evacuation of the wounded. Access has not been granted thus far.

It added that “as a neutral intermediary, the ICRC facilitated the safe passage of combatants out of the Azovstal plant in coordination with the parties to the conflict... on the understanding that the ICRC would later be allowed to visit these POWs, in accordance with the relevant norms of [international humanitarian law] to check their condition and help them to keep in touch with their families. We did not guarantee the safety of the POWs once in enemy hands because it is not within our power to do so”.

Marharyta Dobrovolska was told by ICRC that her husband, 28-year-old Serhii, - who was among the Azovstal captives - was in Olenivka.

“I asked how he had ended up there, but we were told they did not know,” she said. “We are all worried whether they are alive or not. Soon it will be three months that my husband is in captivity, and nothing has been done. We demand the dismissal of the head of the Red Cross. They guaranteed their safety, promised humanitarian aid and contact with their relatives. But now nobody knows anything about their parents, sons and husbands.”

"We are in shock, we have no words. We really don't know…where to go, what to do. We can't do anything, except to protest," continued Marharyta, a photographer from Mariupol who now lives in Kyiv.

Her last contact with her husband was right before he was captured, she recalled.

"He occasionally texted me. 'Everything is fine, I'm alive' said his messages. He wrote that he loved me, that he will return soon and we will have a child," the 28-year-old said.

Ihor Talalai spent three months in captivity. He was in Olenivka for three weeks. An entrepreneur from Dnipro, he volunteered to evacuate civilians from hot spots and rescued over 40 people from Kharkiv. The Russians captured him during his first trip to Mariupol on March 19.

"They thought I was a soldier disguised as a civilian. I was interrogated in several district offices. I was beaten with a machine gun, strangled, called names, put on my knees, and my hands were tied behind my backs with tape. These people hate Ukrainians, for them a Ukrainian is an enemy that must be defeated," the 25-year-old told IWPR.

In the penal colony, he shared a three-by-five metre cell with 48 other people. It was a former isolation cell.

"They pushed as many people there as they could. People slept sitting. We were given bread and some porridge that could fit in the palm of your hand. We were hungry all the time. No medical assistance was provided. There was a catastrophic lack of water.”

He recalled that the prison held both military and civilian hostages, with no distinction. Everyone was beaten and forced to work in tasks such as carrying water, repairing barracks and cooking in the field kitchen. They were beaten for refusing to work.

POWs were also forced to pass through a corridor where they would be assaulted with various tools.
"On April 15, 850 servicemen of Ukraine’s marine corps were brought to Olenivka from the Ilyich Iron and Steel Works [one of Mariupol’s metallurgical plants]. They were beaten so that they howled in pain.”

After three weeks, Ihor was forced to sign a paper stating that he had no complaints against the “investigators” and was released.

As of August 8, a coalition of human rights activists, Tribunal for Putin, have recorded over 15,000 war crimes committed by the Russian Federation since the beginning of the full-scale invasion on February 24.

"We have recorded facts with humiliating videos, the demands to tell outright lies on camera, torture of military and civilians…There are videos where the body parts of a prisoner of war are cut. This is not just a violation of the Geneva Convention, it is beyond human understanding,” Poliekhina told IWPR.

The detention of POWs in facilities in close proximity to the combat zone is also a violation of the Convention.

“There is a direct requirement to evacuate prisoners of war as soon as possible after capture to special camps located at a safe distance from the combat zone,” she continued. “Also, the Russian side does not officially confirm the location of prisoners of war, deliberately sending false answers to relatives, does not ensure contact with relatives and does not allow the transfer of parcels with necessary things and medicines.”