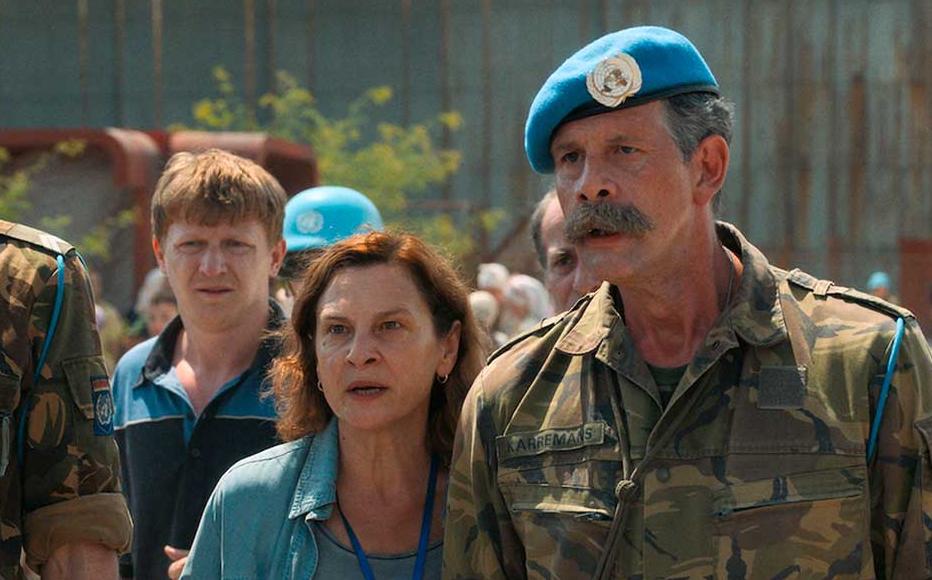 Oscar-nominated film reminds us that, 25 years after Srebrenica, coexistence is far from harmonious.

Still from Quo Vadis, Aida? - a film by Jasmila Žbanić.
The link has been copied

When I heard that a Bosnian movie about the 1995 events in Srebrenica had been Oscar-nominated for the best international feature film, I was overwhelmed with pride and joy. For me and hundreds of thousands of other Bosnians, the selection of Quo Vadis, Aida? was not only a great success for its director Jasmila Žbanić, but also an opportunity for hard-line nationalists to finally accept the truth about the Srebrenica genocide and move the reconciliation process forward.

“This film has not been made to divide people, but to make us understand each other better,” Žbanić said on her Facebook page. “To us, this is more than just a film; it's a reminder that genocide in Srebrenica must not be denied nor forgotten.”

Quo Vadis, Aida? depicts the events in the UN base near Srebrenica shortly after this eastern Bosnian town was overrun by the Bosnia Serb Army, led by Ratko Mladić, on July 11, 1995. More than 8,000 captured Bosniak (Bosnian Muslim) men and boys were subsequently murdered and buried in mass graves scattered around eastern Bosnia. A quarter of a century after this crime, the remains of about 1,000 victims still have not been found.

In 2017, the Hague Tribunal sentenced Mladić - nicknamed the Butcher of Srebrenica - to life in prison for genocide and other war crimes. Rendering the judgement, Presiding Judge Alphons Orie noted that Mladić's crimes “rank among the most heinous known to humankind”.

Not surprisingly, Quo Vadis, Aida? was not welcomed in Republika Srpska (RS), where many Bosnian Serbs still view Mladić as a wartime hero.

Bosnian Serb authorities still deny that genocide ever happened in Srebrenica, including a member of the state presidency Milorad Dodik, RS president Željka Cvijanović, and the town’s mayor Mladen Grujičić.
The RS ministry of education and culture recently issued a statement in which it declared that Žbanić’s film was not competing for the Academy Award as a representative of the whole of Bosnia and Herzegovina, but only of its Bosniak-Croat entity, the Federation of BiH.

Despite positive reviews from media outlets around the world, I avoided watching this film for many months because its subject was too painful and too close to heart. In July 1995, I worked with ABC News as an interpreter and field producer and was in Tuzla – a city under Bosnian government control - when Srebrenica fell. At that time, we saw thousands of exhausted refugees who arrived in Tuzla on foot, after a harrowing journey through minefields, forests and enemy lines. Survivors told us stories of unimaginable horrors, so terrifying that they seemed unreal.

When I joined IWPR in 2004, I covered several war crimes trials held at the Hague Tribunal that were related to the 1995 Srebrenica events. During those trials, I heard countless testimonies of survivors, experts and witnesses who all painted a picture of the hell that people in Srebrenica went through before and after the city fell to Serb forces.

Žbanić focuses her story on the fictional character Aida, a UN translator who desperately tries to save her husband and sons from the advancing Bosnian Serb forces. What we witness is the palpable fear, humiliation, helplessness and frustration of the main protagonist, of refugees trapped in the UN base, and of the Dutch personnel, until all culminates with the ultimate betrayal of Srebrenica citizens by the international community that was supposed to protect them.

This was a very difficult film to watch, even though Žbanić smartly avoided any explicit scenes of violence. Although she offers a glimpse of hope at the end – hinting that a new generation might bring positive change – Bosnian reality shows that, actually, very little has changed over the past 25 years. Today, Bosnia’s different ethnic groups may not be at war, but their coexistence is far from harmonious. In fact, more often than not it feels forced because Bosnian Serb and Croat nationalists spare no effort to highlight the state’s dysfunctionality, to weaken its institutions and to convince Bosnian citizens that the three main ethnic groups would be better off in separate states.

Many of these nationalists saw the coronavirus pandemic as a perfect opportunity to demonstrate just how inefficient central government is.

Bosnia is currently among the ten countries with the highest death rate per one million population, and the situation is worst in its capital, Sarajevo. Over the past ten days, health authorities have reported more than 8,000 new cases and 180 deaths in the city of about 400,000 people.

Overwhelmed medical workers have compared the current influx of patients with that during the 1992-95 siege of Sarajevo, when they had to treat hundreds of wounded people on a daily basis. Even Žbanić herself told the media last week that she had contracted coronavirus and couldn't give any interviews following her film's nomination for the Academy Award.

As the numbers of new cases and coronavirus-related deaths rise, so does the frustration of Bosnian citizens with the way state and entity authorities are handling the crisis. At the beginning of this week, a group of citizens from Sarajevo filed a lawsuit against four Bosnian officials for failing to secure vaccines against coronavirus and prevent unnecessary deaths.

A year ago, the situation was different; politicians from all sides temporarily abandoned their divisive rhetoric to show a surprising level of unity in their efforts to fight the virus.  As a result, for the first time in many years Bosnia had a glimpse of what a functional state could look like. (see: https://iwpr.net/global-voices/bosnia-coronavirus-forces-rare-moment-unity).

Unfortunately, that did not last long. Over the past year, each entity has had different approaches to the pandemic – from imposing lockdowns to purchasing medical equipment and vaccines.

Last year, state authorities ordered 2.1 million vaccines under the global COVAX scheme and from the European Union, but deliveries have been delayed. Instead of starting direct negotiations with vaccine providers – as neighbouring Serbia did very successfully – the state authorities left it all to the entities. Meanwhile, the entities waited for the state to take action. Precious months were lost and with them, people's lives.

Meanwhile, Serbia has done an exemplary job and purchased enough vaccines – mainly from Chinese and Russian providers – to inoculate all its citizens before summer. Ironically, more and more Bosnian citizens are using family and friends’ connections to go to Serbia to be vaccinated there.

Bosnia hasn't received a single vaccine from the EU yet, although the first contingent of 24,000 Pfizer doses – supposed to be delivered in mid-February – should arrive later this week. It seems that the EU is preoccupied with its own problems and has given free rein to Russia and China to increase their influence in the region through vaccine diplomacy, using Serbia as their proxy.

As the pandemic continues, Bosnians feel as abandoned and betrayed by the West as they did in the Nineties, when the war raged and they were left to their own devices. As time goes on, ethnic divisions will only become deeper and hard-line nationalists – led by Dodik – will exploit the pandemic to expose the weaknesses of Bosnia’s complicated political system, undermine state institutions and advance their own separatist agenda.

In that regard, Quo Vadis, Aida? should not be viewed just as a piece of art, but also as a reminder that ethnic tensions in the Western Balkans should never be underestimated - and that the West should never avert its eyes from the region, not even during a global crisis.

Bosnia and Herzegovina
Culture, Genocide
Connect with us