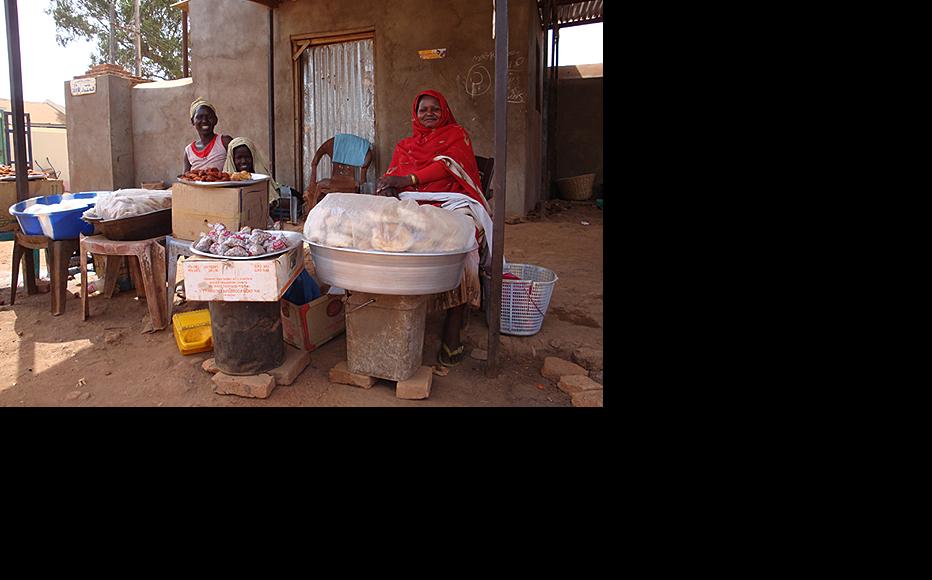 Women selling bread at a market in Wau, South Sudan. (Photo: Simon Jennings)
The link has been copied

A new IWPR radio programme discussing women’s rights in South Sudan has received a warm welcome from listeners in the region.

Nadhrat al-Shafafa, which means “Transparent View”, is a 15-minute weekly magazine show broadcast in and around the towns of Wau and Malakal, and in Gidel, north of the border in Sudan. It is produced in partnership by the Catholic Radio Network, CRN.

Launched in August, the weekly show has already covered issues affecting the daily lives of women in South Sudan, including alcoholism, forced marriage and abortion.

Nadhrat al-Shafafa consists of a mix of news, interviews and analysis, with an emphasis on women’s rights. It aims to provide women with a place where they can access independent information about the rule of law and women’s rights, and to stimulate debate through local radio in northern parts of South Sudan, on the border with Sudan. It provides an opportunity for people living in these volatile frontier areas to become better informed about issues facing their communities, and also to air their own views.

The content is gathered and recorded by IWPR’s and CRN’s female reporters in Wau, Malakal and Gidel.

The first programme, produced by a team of IWPR-trained reporters in Gidel, featured a woman called Romia Ismail, who is something of a role model as she manages to earn a living while caring for her family. She works as a midwife and farmer, while also single-handedly looking after her immediate and extended family and educating her children.

After the programme went out, listeners told the reporters in Gidel how much it had inspired them.

“I am impressed by Romia, who is able to work at the hospital, farm, and take care of her children,” one female listener commented. “This shows us that we can also do more jobs so that we provide for our families. This programme has opened my eyes, especially to the need to try to do something to help my husband take care of our family.”

Nadhrat al-Shafafa is broadcast by Radio Voice of Hope in Wau, Radio Voice of Peace in Gidel and Radio Saut al-Mahabba in Malakal. At the moment it is in Arabic, and there are plans to produce versions in the Dinka, Nuer, Shilluk and Tira languages.

In Malakal and Wau, the stations host live phone-ins after the programme to give listeners a chance to voice their opinions and address their concerns directly to representatives of local government and other relevant groups.

When they heard the first programme, men as well as women bombarded the radio stations with calls. Several listeners called for women to get more support for starting up small businesses or engaging in farming. Listeners also stressed the importance of female education for girls in South Sudan.

“The calls were too many and the time seemed not enough,” said Eva Batista, a reporter at CRN’s Radio Voice of Hope in Wau who also hosts the live phone-in. “It seems as if people have been waiting for such a programme. It shows that we are touching people’s lives.”

CRN believes the programme is already raising awareness among its audience, both female and male.

“The proposal of IWPR [to produce] women's radio magazines for our area is highly welcome,” Sister Mary Carmen, director of Radio Voice of Peace in Gidel, said. “Women feel relieved when they hear that people are voicing their struggles, [and] consider it a newly-opened door of hope which envisions change. On the other hand, some men explained that they were not aware of the extent to which women had been living with certain situations [and] injustices.”

Ahead of actual production, IWPR ran a ten-day training and mentoring course for the female broadcast journalists who are now working on the show.

A second phase of the training programme, led by IWPR producer Lucy Poni, was held in Malakal in September.

These training workshops taught reporters the basic skills of broadcast journalism, including research, interviewing and production techniques. The course also covered a variety of presentation formats, so that participants will be able to reach out to their audience and interact with it on complex issues via news bulletins, special reports, radio documentaries, public debates and phone-in talk shows.

Lucy Poni is an IWPR radio producer in South Sudan.

This project is funded by the European Union.