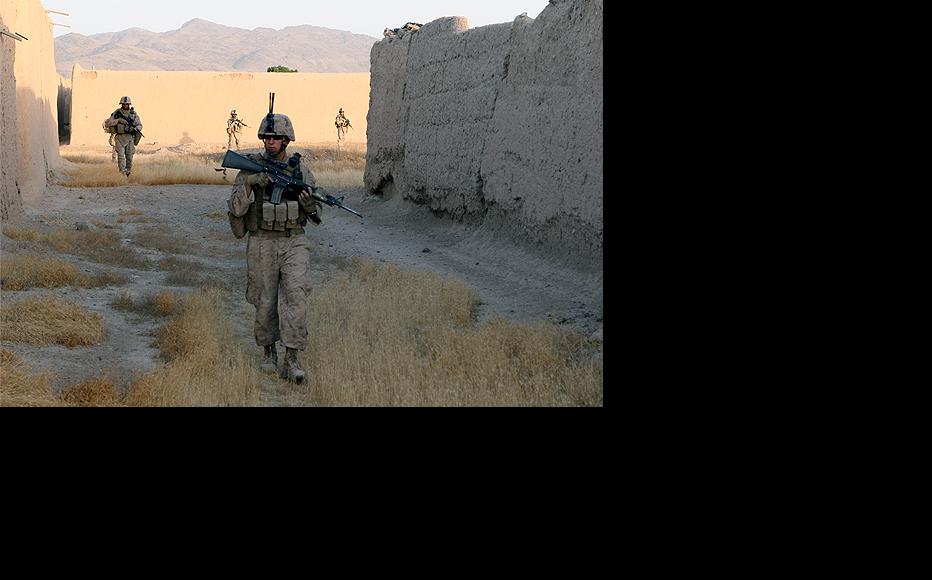 The Taleban want to deter Helmand civilians from cooperating with international forces like these US Marines, but the murder of an eight-year old has directed local ire against their own ruthless practices. (Photo: US military/First Lieutenant Kurt Stahl)
The link has been copied

The Taleban execution of an eight-year-old boy for allegedly collaborating with coalition forces in Afghanistan’s Helmand province has caused deep anger among local residents .

The hanging of a child is seen as completely unacceptable by Afghans in the province, and contradicts the Taleban’s own rules of engagement. What is worse, it seems he was murdered not as a suspected collaborator, but because his father was unable to hand over cash that the insurgents wanted to extort from him.

Condemnation of the killing has come from religious scholars, tribal leaders and villagers in Helmand, who say this brutal act was a desperate attempt by Taleban commanders to terrorise the civilian population.

Mawlawi Mehr Del, deputy head of the Muslim clerical council in Helmand, said the extrajudicial killing in no way qualified as an execution under Islamic law.

“Islam does not permit anyone to sentence a minor to execution. It is against Islam, against shariah law,” he said. “God may be extremely upset with them. Those who do something like this are neither jihadis nor Taleban, they are enemies of human life.”

He added that the killing showed the Taleban were under great pressure in their war with coalition forces.

Eyewitnesses said the child, named Delawar, was hanged by a dozen Taleban in a garden by his home in the village of Heratian in the Sangin district. The men accused Delawar of spying for British forces.

Sangin resident, Taza Gol, 60, said the boy screamed for his parents as the militants put a rope around his neck.

“I am very scared,” he said. “Taleban executions without trial had stopped for a while but have now started again. knows how many more will be executed without trial.”

The child’s father, Abdol Qodus, who initially said that his son was killed by the Taleban, now denies this and maintains the boy was killed by “ghosts” in the garden. Abdol Qodus has declined to talk further.

Naqibollah, the boy’s grandfather, told IWPR that Abdol Qodus was now unable to leave his house for fear the Taleban would kill him for reporting his son’s murder to the authorities.

“Many innocent people have been killed by the Taleban and the foreigners, but nobody cared about them,” he said. “Maybe God will care for this oppressed nation.”

Naqibollah said the Taleban killed the boy not because they really believed he was a collaborator, but because his father was too poor to pay them the “contribution” of 600 US dollars they were trying to extort from him.

“Abdol Qodus’s relationship with the Taleban had got worse recently,” he explained. “For this reason, the Taleban asked him for money as a tithe, but he didn’t have the money. The regional Taleban commander, Hajji Malem, was upset with him and then hanged his son the next day under the pretext he was spying.”

The Alokozai tribe, to whom Delawar belonged, expressed collective anger. Tribal leaders issued a statement demanding that the Taleban provide an explanation for the boy’s death.

Faruq Nangialai, 35, a resident of Helmand’s main town Lashkargah, spoke for many when he condemned the lynching.

“As a result of this action, people have developed an extreme hatred of the Taleban. It is a great sin to do violence to a child, to hang him. If I were a judge, I would not forgive them for this act… but would punish them severely.”

Even if the Taleban claim the right to carry out executions, Islamic law prohibits capital punishment anyone under 18. The Taleban’s own code of conduct, drawn up by the movement’s council in Quetta two years ago, clearly stipulates that no commander may order the execution of minors, and anyone disobeying this rule will face retribution.

At the time, observers saw the Taleban rulebook as an attempt to win popular support by demonstrating leniency and adherence to some kind of regulations.

A senior Taleban member, Mullah Abdol Bari, suggested that the Quetta document did not really apply in Helmand.

“The code has been changed for Helmand because the number of infidels there has increased, and the Taleban have a problem in that they don’t have the time or place to hold trials,” he said.

That, he said, meant any influential Taleban commander in Helmand was allowed to use his own discretion to pass judgement on people for spying and punish them in public.

The district government chief in Sangin, Sharif Khan, said he had only heard about the hanging from media reports, but stressed that the Taleban were infamous for their cruel treatment of minors. For example, he said, the militants forced children to carry landmines past Afghan government checkpoints.

Dawud Ahmadi, spokesman for Helmand’s provincial governor, said the Taleban killed the child to scare people away from contact with the Afghan authorities and the international military forces.

“The government and the international forces have recently succeeded in establishing positive relationships with the people,” he said. “That doesn’t suit the Taleban. So by killing this child, they are intimidating people to make them distance themselves from the government and the foreign forces.”

A resident of Sangin district, Toti Shah, said he believed the murder would cost the Taleban dear in terms of local support.

“The Taleban are puppets of Pakistan, and will do anything to please their masters. I think this action has lost them the people’s support,” he said.

He also said the Afghan authorities should have tracked down the killers.

“If our officials cared about us, they would have prevented this incident. If they were unable to do so, they should have found the perpetrators,” he said.

A spokesman for the Human Rights Commission of Afghanistan, Nader Naderi, said his organisation was not yet fully informed about the incident, but it was clearly beyond the pale.

“This act by the Taleban is a crime under national and international law, and can never be acceptable. We have information that the boy was hanged in public and in the presence of other children. This was done simply to sow terror,” he said. “Via the religious scholars, we have told the Taleban on several occasions to respect human rights.”

Afghanistan
Connect with us