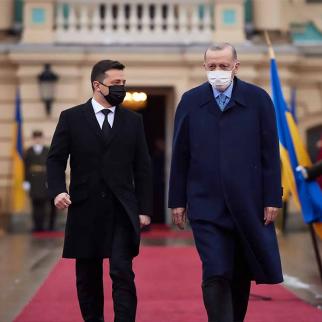 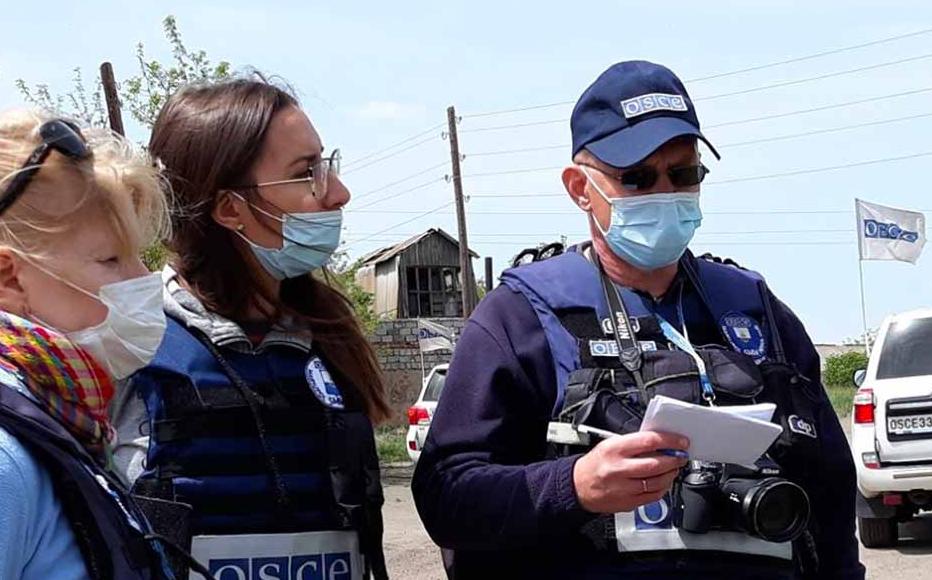 OSCE monitoring officers speak to a civilian in the frontline village of Starohnativka, Donetsk region. Deployed in March 2014, the OSCE mission is the only international organisation monitoring the security situation on both sides of the contact line in Ukraine conflict-hit east. © OSCE SMM - Special Monitoring Mission to Ukraine
The link has been copied

The Organisation for Security and Cooperation in Europe (OSCE) has started to pull some monitors out of Ukraine, imperilling the future of the only international monitoring mission operating on both sides of the contact line since the beginning of the conflict in the country’s east.

The Special Monitoring Mission (SMM) was deployed in March 2014, following a request from Kyiv in the wake of Russia’s annexation of Crimea and the start of the conflict between the Ukrainian army and Russian-backed militias in the east of the country. It is the largest OSCE field mission with over 1,300 personnel including 689 monitors, the majority of which were deployed in the Donetsk and Luhansk regions, including in the areas controlled by the Russian-backed armed groups.

The OSCE said in February 13 statement that “certain participating states” had told citizens seconded to the mission to leave within days. Countries have the right to independently decide “on the relocation of their secondees in or out” of Ukraine, the statement read.  It did not name the countries and it added that the mission would carry on with its work as per its mandate.

Sources told IWPR that, as of February 16, the US, UK, Canada, Denmark and Albania had withdrawn their staff from Ukraine, while the Netherlands moved its monitors to areas controlled by Kyiv.

An unarmed civilian mission, the SMM has become the eyes and ears of the international community in a conflict that has claimed about 14,000 lives and displaced almost 1.5 million people. It monitors compliance to the Minsk agreements signed in 2014 and 2015 to ensure compliance to the ceasefire and withdrawal of heavy weapons, among others. As of 2022, most of the provisions remain unfulfilled.

Diplomats and analysts alike have raised concerns, noting that the mission stayed on at the height of the fighting in 2014 and 2015.

“In Ukraine, the work of the mission has been often criticised, monitors have been accused of turning a blind eye to many violations. In practice, it is a very effective control mechanism,” said Ihor Solovey, head of the governmental Centre for Strategic Communications and Information Security. “Without this control, it will become easier for the Russian Federation and its collaborators to violate the terms of the ceasefire, incite shootings and provocations and accuse the Ukrainian military of fictitious crimes.”

The mission reports only what it witnesses itself, complementing its monitoring on the ground with state-of-the-art technology which includes unmanned aerial vehicles (UAVs) and satellite images.

Maria Zolkina, political analyst at the Ilko Kucheriv Democratic Initiatives Foundation, agreed that the monitors’ activity was relevant even if their capacity was limited.

“Even if they’d work only in areas controlled by Kyiv, they will still be able to report about shootings and, most importantly, to identify that they come from the uncontrolled territory,” she told IWPR. She added that pulling out from non-government controlled areas in Donetsk and Luhansk posed challenges for the monitors’ potential return.

“Over the past year, [they have faced] unacceptable working conditions: they have been threatened, they were blocked in their hotel and were not allowed to conduct monitoring. We anticipated that by the end of 2020 the work of the SMM in the uncontrolled territory would come to an end,” she noted, adding that the current crisis has only accelerated this process,

In October 2021, the capture of a separatist officer by Ukrainian government forces sparked a blockade of SMM monitors in their hotel in Donetsk for a week.

Wolfgang Sporrer, former head of the SMM human rights’ department, maintained that pulling out staff was particularly “problematic” amid the current standoff.

“When talks of ‘false flag operations’ proliferate… a full picture of developments on the ground is needed. OSCE reports may be the only impartial, reliable source of information in case violence breaks out,” Sporrer, now an adjunct professor of conflict management at the Berlin-based Hertie School of Governance, told IWPR.

The mission employs international observers from all 57 OSCE participating states, including Russia. The presence of Russian monitors has caused concern, but check and balances, including mixed-nationality patrols, have guaranteed impartiality. Pulling out staff may jeopardise this, warn Ukrainian officials.

“This is even worse than just closing the mission in the uncontrolled territories,” a senior government official told IWPR on condition of anonymity. “Formally, the mission remains, but the probability that they will want to see any new violations is falling rapidly.”

A diplomatic source told IWPR that, despite the situation, the mission’s mandate, which is renewed annually every 31 March, is likely to be extended.

“The West sees it more necessary than before. The question is only what Russia [decides], but I think that they value [the SMM] reports and rely on the data produced as a trustworthy source of impartial and publicly available information,” the source said on condition of anonymity.

“The presence of the mission has had a reassuring effect on civilians: even when the situation was bad, at least their plight would not be unseen and would not be forgotten,” explained Sporrer. “When now some OSCE members depart as they assess the situation as ‘too dangerous’, this will only strengthen one shared belief by civilians on all sides of the conflict… that they have been forgotten and are being left behind by all sides, particularly now, during these uncertain times, when an international presence would be most needed.”

Russia’s foreign ministry spokesperson, Maria Zakharova, stated that the SMM is needed now more than ever” and urged its leadership to prevent attempts to “manipulate the mission”.

Russia and the OSCE have had disagreements in the past over eastern Ukraine. In September 2021, Moscow refused to allow the extension of another OSCE mission to monitor the border between the non-government controlled areas and Russia.

The situation may be further inflamed should the Russia recognise the Donetsk and Luhansk as independent “republics”. On February 15, the Duma, the lower house of parliament, approved a bill calling for Russian president Vladimir Putin to officially recognise them.

According to political analyst Evgen Magda, Moscow is testing the West’s red lines. The recognition of the occupied territories of Ukraine will give the Kremlin more room for manouevre. Moscow claims it is not party to the conflict and has been pushing Kyiv to negotiate directly with the de facto authorities.

“They will say that the issue of the return of monitoring mission or their work format should be resolved at the political level with Donetsk and Luhansk and this, of course, is unacceptable for Ukraine,” Magda said