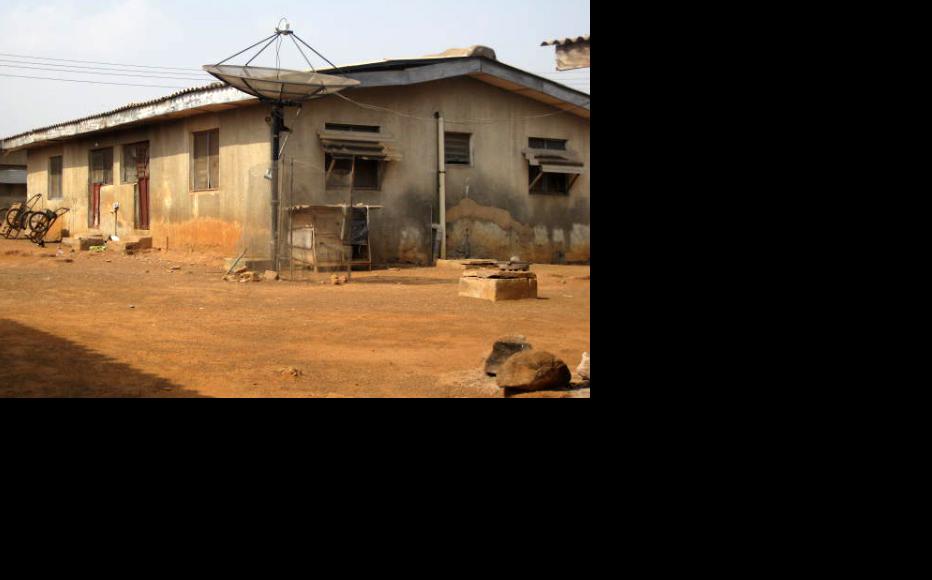 This NCOs block has not been renovated since it was built in 1978. (Photo: Samuel Malik) A road in need of repairs. (Photo: Samuel Malik) Trying to haul a full 25-litre jerry can in each hand between rows of empty buildings, the woman stopped to wipe sweat off her face with the edge of her wrapper.

Mama Baby, as she called herself, was fetching water from the borehole in the army barracks of the 244 Recce Battalion, Saki, Oyo State.

Although the massive camp is home to hundreds of soldiers and their families, most of its residents are forced to rely on one hand-pumped borehole sunk some 20 years ago by the troops themselves.

Mama Baby said that, with water such a valuable resource, she would not risk leaving a full jerry can in the street while she took the other home.

“My brother, I no fit leave my water here make somebody come carry am go,” she said in pidgin, the lingua franca spoken in Nigeria, as she caught her breath.

The 244 Battalion has struggled with severe water shortages, dilapidated buildings and bad roads, despite vast sums of money pledged by the Nigerian government each year to refurbish military barracks.

The Ministry of Defence and Presidential Committee on Barracks Rehabilitation each year allocate funds for the rehabilitation of dozens of army, air force and navy barracks around the country.

But observers say that such neglect is common in army barracks nationwide.

QUARTERS DEPEND ON RANK

Accommodation in such barracks is divided into three categories according to seniority. Privates, lance corporals and corporals all live in the so-called other ranks’ quarters, while non-commissioned officers (NCOs) live in sergeants’ quarters.

Commissioned officers, from the rank of second lieutenant up to lieutenant colonel, live in officers’ quarters.

Most of the barracks are taken up with other ranks accommodation.

In 244 Battalion, there are 101 blocks of 12 one-bedroom flats for other ranks out of which 76 are inhabited. NCO quarters consist of 50 blocks of two two-bedroom flats and one detached three-bedroom flat for the Regimental Sergeant Major (RSM).

The commissioned officers quarters contain 33 houses, including a fenced and gated residence for the commanding officer.

Built in 1978, the barracks were once considered one of the country’s top military camps in terms of quality and aesthetics.

“It was a beautiful barracks, from the arrangement of blocks to the walkways. Everything worked fine,” said 62-year-old Molta Tarki, a retired corporal who began his military career there.

Nearly 40 years later, many of the buildings are badly dilapidated and the roads are in a deplorable condition.  A number of the habitable buildings still need major works.

Some blocks in the other ranks quarters were renovated in 1998, although the remaining categories were left untouched.

In 2010, the Millennium Development Goals (MDGs) office renovated two more blocks in the other ranks quarters, along with the clinic, primary school and commanding officer’s residence.

For the next four years, no renovation work was done in spite of the billions of naira allocated for barracks rehabilitation nationwide.

During the same period, the Presidential Committee on Barracks Rehabilitation (PCBR), a department under the presidency, budgeted N6,688,843,892 (33.4 million dollars) for the rehabilitation of army, navy and air force barracks in the country.

In the same period, the army also allocated N278,548,812 (1.4 million dollars) for the provision of water to army barracks around the country.

Apart from these allocations, the 244 Battalion has had money specifically set aside for it.

Each year, the government allocates money for so-called constituency projects initiated by lawmakers, such as environmental or economic projects.

In 2014, N150 million (748,649 dollars) was allocated for renovations and road resurfacing at the 244 Battalion as part of these constituency projects.

Despite all this funding, only 18 more buildings were renovated in 2015.

Twelve of those were in the commissioned officers’ quarters with the remaining six in the NCO quarters.

Out of the 101 buildings meant for other ranks, 25 blocks containing 300 one-bedroom flats remained uninhabitable.

The Ministry of Defence refused to respond to a freedom of information about the status of the army barracks rehabilitation projects.

The roads inside the barracks remain badly in need of repair, with soldiers resorting to filling the potholes with sand and stones, especially during rainy seasons. Erosion continues to wash away parts of the roads.

The state of the roads makes it harder for the women, young people and children who go to fetch water at the borehole.

Water shortages mean that many homes own a pushcart that can carry up to a dozen 25 litre jerry cans of water. Propelling them along the road requires great effort and can take up to an hour, quite apart from the time needed to queue to get the water.

A soldier, who asked to remain anonymous, said the best time to get water at the borehole – especially for unmarried soldiers who have to be at work by eight am – was is to go when everyone else was sleeping.

“If you go there anytime from midnight, you are sure of not wasting time to get water because many people have gone to bed,” he said, adding that sometimes there were people even at that time of the night.

Women who spoke to our reporter declined to reveal their husbands’ identities to prevent them from being sanctioned by army authorities.

Magdalene said that she had to push a cart to the borehole because her house was over a kilometre away.

“I don’t have grown up children to help me fetch water and when my husband is not around I have to do it myself, and that is why I monitor my children to ensure that they do not waste water,” she said.

Ummi, whose husband is in the northeast fighting the Boko Haram insurgents, said that she had to pay people to deliver her water, especially when the borehole was not functioning.

“My husband does not like me going out but if I don’t, how do I get water? Sometimes I pay some children when they close from school to fetch me water,” she said.

Others have come up with enterprising solutions for fetching water. Jamilu and his friends, who are aged between 19 and 22, have worked out a system to master both the weight of the handcarts and the bad roads.

“Sometimes three of us use one cart, each person having four jerry cans. What we do is that we tire a rope in front of the cart, so while two people push it the other person pulls the rope,” he explained.

Tarki, the retired soldier, said that it had been much easier to obtain water when he lived in the barracks.

“You see, there is a mountain close to the armoury and on that mountain there are two giant tanks that supplied water to the whole barracks in the 1980s. Then, there were hardly water taps outside the buildings because people did not need them, as the ones in kitchens and bathrooms worked fine,” he explained.

“However, somebody stole the generator that supplied electricity to the pumping machine and before you knew it, the machine too was gone and they were not replaced.”

A tap was installed beside the clinic when it was renovated in 2010 but like the other taps in the barracks, it needs electricity to function.

The unstable power supply, and low voltage when it is available, means that this cannot be relied upon.

Thus, Mama Baby and other residents have to rely on the hand pump borehole provided by soldiers themselves some 20 years ago.

“We don tire for this water problem but wetin we go do na? If to say army fit put at least two more boreholes for the barracks, e go reduce the problem,” she said.

Nigerian journalist Samuel Malik produced this report with support from PartnersGlobal and the Institute for War & Peace Reporting.  It is one of a series of investigative reports produced under the Access Nigeria/Sierra Leone Programme funded by the United States Department’s Bureau of International Narcotics and Law Enforcement.

Nigeria
Army
Connect with us