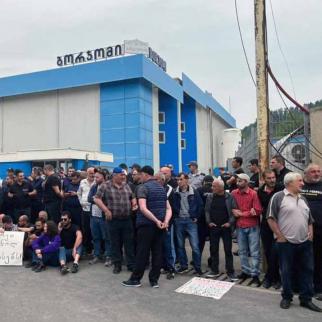 Workers of the Borjomi water's two bottling factories in Georgia have been on strike for weeks over wages and uncertainty after the iconic Georgian brand was caught into the sanctions against Russia in the wake of the invasion of Ukraine. © Maradia Tsaava

The instantly-recognisable brand has become a collateral victim of Russia’s invasion of Ukraine. 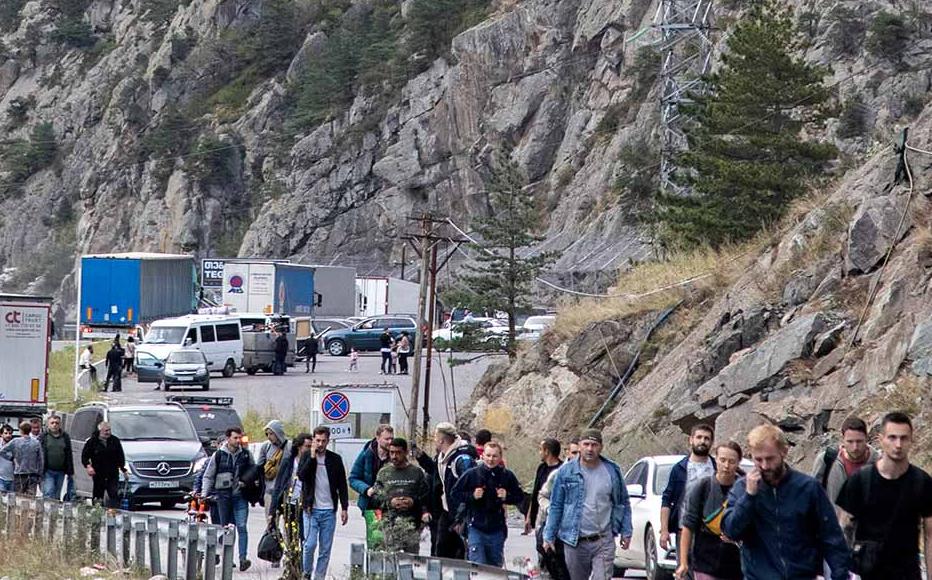 People who have crossed the Verkhni Lars customs checkpoint between Georgia and Russia walk in the road on September 28, 2022 in Zemo Larsi, Georgia. On September 21, President Putin announced what he described as a partial mobilisation of Russian army reservists to fight in Ukraine with 300,000 men to be called up and since then Russians have been fleeing to neighbouring countries. © Daro Sulakauri/Getty Images
The link has been copied

A seemingly endless line of people snakes along the winding road to Zemo Larsi-Verkhny Lars, the crossing point in the heart of the Caucasus mountain range between Georgia and Russia.

Russian men are fleeing to Georgia to avoid being drafted since President Vladimir Putin ordered the call-up of 300,000 reservists to bolster Russia’s forces in Ukraine after a series of military defeats.

They are joining tens of thousands of compatriots who arrived in spring in the wake of the Kremlin’s invasion; but observers note that this new wave is different.

“For many of the Russian citizens who arrived in spring, the war in Ukraine was unacceptable. They had high-paying professions and jobs, and therefore funds, and could work remotely,” said Lasha Dzebisashvil, professor of political sciences at the University of Georgia. “Those who are arriving now are escaping the mobilisation, [without it] they would not have left Russia. You can see that they made the decision on a whim, and they don't know how and with what they will live here.”

The exact number of people who have left Russia since Putin’s announcement on September 21 is unknown, but the emerging picture is that of an exodus. A similar influx has been reported at crossings with Kazakstan, Mongolia and Finland, which, unlike neighbouring European countries like Poland, did not close its border with Russia.

On September 27 Georgia’s interior minister Vakhtang Gomelauri said that “four to five days ago 5,000-6,000 [Russians] were arriving in Georgia daily. The number has grown to some 10,000 per day”. He added that, for now, Tbilisi was not going to close the border.

The outflow has spurred the Russian authorities to set up a pop-up military enlisting point at the border and issue would-be draft dodgers notices on the crossing itself.

In the first five days of the war, 21,396 Russians arrived in Georgia. The numbers steadily increased to reach over 260,000 in August.

Georgia was already a popular destination for Russians. Since 2012, they can enter visa-free and remain for up to one year; after 12 months they can leave and re-enter within a few hours and remain again for another year.

Support for Ukraine is strong among Georgians. Buildings, shops, museums and parks are plastered with Ukrainian flags and pro-Kyiv messages, and graffiti telling Russians to “go home” or lambasting Putin are a common sight.

Resentment towards Russia, on the other hand, is deeply rooted.  In August 2008 the five-day war Russia waged against Georgia left the country partitioned, with Russian troops stationed in its two separatist regions which the Kremlin backs financially and militarily.

Verbal confrontation between Russian citizens and Georgians is not uncommon. On September 14, a video went viral on social media showing a group of Russians chanting “Glory to Russia’ on a bus in Tbilisi. Travelers reacted shouting “Go back to your Russia” and the group was kicked off the bus.

Some businesses have taken a firm stance. Tbilisi’s popular bar Dedaena requires Russian visitors to register on its website and agree to a list of points, including acknowledging that Russia occupies 20 per cent of Georgia, condemning Moscow’s aggression of Ukraine and agreeing that Putin is a dictator. Russian citizens are also asked to speak to the staff either in Georgian or in English and not engage in political discussions.

In early August, this triggered a series of online attacks against the bar, with messages like “It is time to denazify Georgia” and “Georgia is next”. Hackers temporarily changed its name online to “Denazification” and dropped its ranking on Google. On August 5, Google deleted aggressive comments and returned its original ranking to the bar.

Gennady, a Russian in his 20s, lamented Georgians’ “unfriendly” attitude.

“You may enter a cafe and find that the wifi password is, ‘Russia is an occupier.’ This is all very depressing. Tbilisi has the worst attitude towards Russians, people are so politicised…but in Adjara [western Georgia] it’s different, there is no problem if you speak Russian there.”

Part of the resentment lies in the emigrees’ motives.

“The state should have a security policy that prevents the entry of potentially dangerous people into the country."

“They have not fled the political regime; they escaped the discomfort the economic sanctions have created…they don’t like that we support Ukraine, and they get angry every time we tell them that Russia is the occupier,” Mariam Chavchanidze, an economist, told IWPR.

IT developer Sasha is a case in point. The 28-year-old had his own business in Moscow but left due to the economic sanctions.

“When you work in the IT sector and you don’t have access to necessary software and equipment, what should you do?” Sasha told IWPR, adding that his employees left as well, to either Georgia or Turkey.

Chavchanidze acknowledges the economic benefits, but there are substantial downsides.

“The Georgian lari gets stronger. They support the economy by buying food, clothes and various items. But the prices have gone up, putting pressure on low-income families and vulnerable groups, such as students from the regions,” she said.

Property prices have skyrocketed over the last six months, with rents up by 80 per cent compared to 2021, according to TBC Capital. Sasha rents a three-room flat in Tbilisi’s historical Sololaki district for 1,500 US dollars a month, a price few can pay in a country where the average monthly salary is about 480 dollars.

IT developer Gennady shares an apartment rented for 800 dollars with a friend.

“Our Georgian friends helped us,” the 26-year-old told IWPR. “We did not meet the owner of the apartment. If they see that you are from Russia, they increase the price. But many owners simply refuse to rent apartments to Russian citizens.”

Russia’s Federal Security Service, which manages the border service, confirmed that the number of citizens leaving the country has risen sharply, increasing by five times to Georgia and three times to Armenia.

Transparency International Georgia, an anti-corruption organisation, reported that 6,419 Russian companies had registered their businesses in Georgia after the war started in Ukraine, seven times more than the annual number of 2021. Out of 13,500 Russian companies registered in Georgia, half of them set up shop after February 24. In the four months following the Russian invasion of Ukraine, 5,990 Russian citizens registered as entrepreneurs.

Opposition parties have called on the government to introduce visa regulations for Russian citizens, a move supported by 66 per cent of Georgians, according to a survey released in April. A petition to cancel the visa-free regime collected 20,000 signatures in two days.

Former Georgian ambassador to the EU and opposition politician Salome Samadashvili told IWPR that “the mobilisation makes a visa regime for Russians a key priority” as the open door posed serious risks to national security.

“A visa-free regime for the citizens of the occupier state is nonsense,” agreed Dzebisashvil, the professor of political sciences. “The state should have a security policy that prevents the entry of potentially dangerous people into the country. A visa requirement will help to filter out such people as agencies will have enough time to do ad-hoc background checks.”

Many see a political risk, as the Kremlin has used the protection of the rights of its citizens to justify its aggression to Ukraine, as well as to Georgia. On September 5 Putin approved a so-called “humanitarian policy”, according to which Russia should “protect, safeguard and advance the traditions and ideals of the Russian World”, a notion used to justify intervention abroad in support of Russian-speakers.

The ruling Georgian Dream party has rejected the call for a visa regime, calling the campaign “xenophobic” and “shameful”.