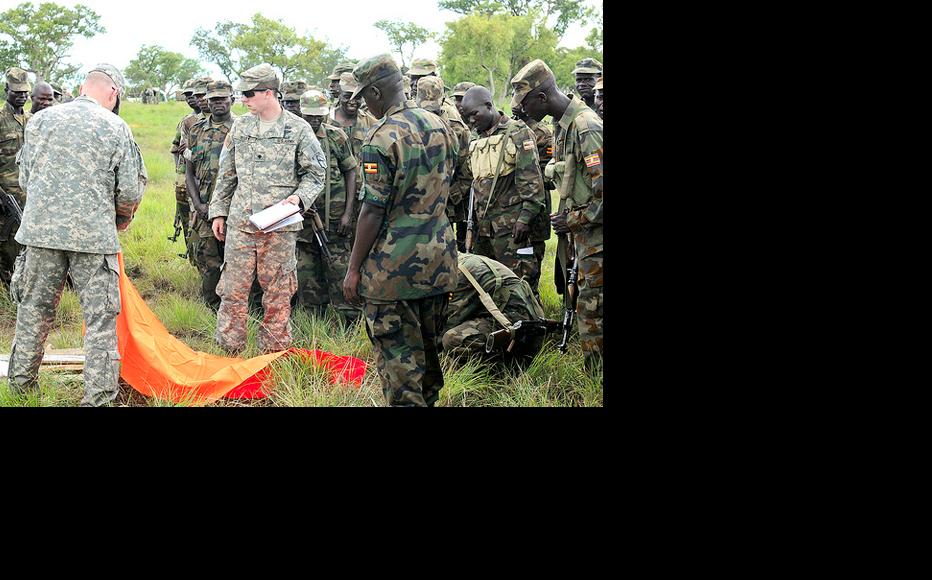 As the Ugandan military seeks to flush out Joseph Kony, leader of the rebel Lord’s Resistance Army, LRA, analysts are downplaying the significance of last weekend’s capture of a senior commander from the group.

According to the Ugandan army, LRA officer Caesar Acellam was captured in a pre-planned ambush as he crossed the Mbomu river between the Democratic Republic of Congo, DRC, and the Central African Republic, CAR.

Felix Kulayigye, spokesman for the Ugandan People’s Defence Force, UPDF, described Acellam as a "big fish", and predicted that his detention would accelerate the arrest of other LRA members, including Kony himself.

The International Criminal Court, ICC, in The Hague has charged Kony and two of his commanders, Okot Odhiambo and Dominic Ongwen, with atrocities committed during the 20-year insurgency which ravaged northern Uganda until 2006. Two others whom the ICC charged in 2005 have since died.

Analysts say it is not clear what Acellam’s arrest means for the pursuit of the three ICC indictees, since the precise circumstances have not been made public.

“The key question again is whether this was a result of a negotiation and he had a path smoothed for him; whether he simply walked out of the bush or whether he was tracked down and captured,” Ben Shepherd of Chatham House’s Africa programme said. “Until we know more details on that, it is very hard to know what the implications are.”

At first sight, it seems possible that Acellam came in willingly, as he and his family were taken without a fight. Following his arrest, he was seen smiling as he stepped out of a military helicopter, without handcuffs. He subsequently told TV cameras he was relieved that he was no longer in the bush.

“My first instinct was to look at it as an unusual capture,” Angelo Izama, an analyst with the Kampala-based security think-tank Fanaka Kwawote, said. “[Acellam] knows the terrain – it appears unlikely that he would casually place himself in an area that he knows is infested with UPDF troops hunting him. Also, he himself seems rather relieved and relaxed.”

Acellam is currently in Nzara, a village in South Sudan that serves as the base for the United States-backed Ugandan force tracking the LRA leadership.

If Acellam did give himself up voluntarily, analysts say the arrest tells us little about how close the pursuit force is to catching Kony and the other commanders.

“The fact that Acellam is captured and he has been one of the commanders certainly is a plus for the UPDF. But how much this goes to demonstrate that the UPDF are beginning to crack into the LRA hierarchy, I am very doubtful,” said Charles Toolit, a human rights lawyer in Gulu, a town in northern Uganda that was at the epicentre of the insurgent conflict. “I don’t think it has serious consequences for the LRA.”

The circumstances of the capture aside, Shepherd warned against drawing too many conclusions from events of this kind. As he pointed out, several senior LRA commanders have already returned to Uganda and received a reprieve from prosecution, under an amnesty law originally conceived when the war was ongoing.

“There has been a series of relatively senior LRA commanders who have either been captured or defected, relatively regularly over the years, and none has heralded the final disintegration of the group. So I’d be reluctant to read too much into this,” Shepherd said.

Acellam was recruited into the LRA in 1988 and was part of its original leadership, rather than being abducted into the force as many subsequent commanders were.

There is some uncertainty about his exact position at the time of his arrest. Some believe he was still part of the top hierarchy as recently as last year, while others say a rift between him and Kony meant that he was no longer part of the main band of rebels, and his defection had been on the cards for some time.

“From 2007, it looks like he had lost contact with the main LRA force,” Toolit said. “It was indicative that he might hand himself in or surrender.”

Following Acellam’s arrest, the Ugandan military has been keen to point out that this “removed doubts” about its determination to track down senior members of the LRA leadership who now roam the border areas of DRC, CAR and Sudan.

Lack of supplies, difficult terrain and the fact that the LRA no longer appears to present a threat to Uganda itself have all served to undermine the enthusiasm of troops and the willingness of the government to see the operation through.

Last year, Uganda withdrew a 700-strong battalion from the operation to track the rebels.

Some analysts remain doubtful about the UPDF’s will to track Kony.

“The level of commitment of Ugandan troops remains an issue, both at the rank and file level and at the commander level,” Ned Dalby, central Africa analyst at the International Crisis Group, said.

The triumphant slant which the Uganda authorities put on Acellam’s capture was fairly inevitable given the recent publicity surrounding the rebels. Kony achieved global notoriety in recent weeks following the viral internet campaign “Kony 2012” by the advocacy group Invisible Children, calling on the United States to sustain its support for the military operation.

US soldiers are deployed in the region to advise the Ugandan military and provide technical support.

Izama said the headline news should not detract from major shortcomings in the campaign against the LRA.

“This talk of successes really distracts from [talking about] the real work that would really have benefited from a realistic picture of what is going on,” he said. “There is a lot of public relations to this war.

“[The arrest] gives the impression that something is being done when in fact little is being done. If you really wanted to go after Joseph Kony, you would increase the number of troops and invest actively in patrols over that stretch of area,” Izama continued, criticising the force for being “too small and poorly equipped”.

He said there needed to be much more cooperation from other countries such the DRC and South Sudan. The DRC does not officially allow Ugandan troops onto its territory to search for the rebels, while South Sudan’s military contribution to the operation has been minimal.

“The diplomatic pressure that should have come to bear on the DRC to allow [the Ugandan army] to operate there hasn’t come,” he said, noting also the failure to get the South Sudanese army to “dedicate an equal number of men specifically for [tracking] the LRA”.

Since Acellam is not among those indicted by the ICC, the question now is whether he will face domestic prosecution for his role in the conflict. The LRA war in northern Uganda killed approximately 10,000 civilians and displaced nearly two million people from their homes .

Once back in Uganda, Acellam could apply for leniency under the Amnesty Act, so that rather than face trial and the possibility of a hefty jail sentence, he would be resettled back into his home community.

Fellow LRA commanders who have already returned to Uganda have reportedly said he should be granted amnesty.

However, Uganda’s public prosecutor Richard Butera told IWPR that he “would not rule out” bringing charges against him.

Acellam’s fate would appear to lie in the hands of Uganda’s supreme court, which is currently deliberating on what action to take against another former LRA commander, Thomas Kwoyelo.

After he was captured by the UPDF in eastern Congo in 2009, Kwoyelo claimed amnesty.

Uganda’s public prosecutor nevertheless charged him with war crimes under the Geneva Convention, and he was sent for trial at the High Court’s recently established War Crimes Court.

In September 2011, High Court judges ruled that Kwoyelo was eligible for amnesty and should therefore not go on trial. The public prosecutor has appealed against that decision, arguing that amnesty cannot be granted to an individual accused of crimes under international law. (For a recent discussion of the amnesty law and its implications, see Compensation Calls as Uganda Renews LRA Amnesty )

Legal experts point out that as a member of the ICC and a signatory to the International Covenant on Civil and Political Rights, Uganda is legally obliged to prosecute those suspected of committing international crimes. However the current interpretation of the Amnesty Act precludes this, meaning that if Acellam claimed amnesty, it would not be possible to prosecute him.